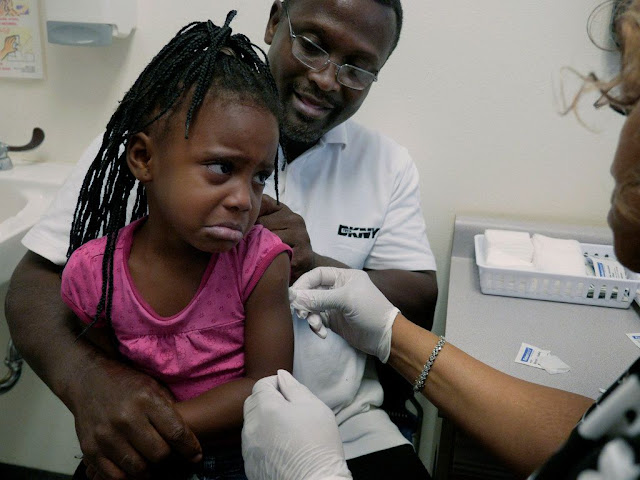 Today, the Washington Post ran a lengthy article about the low coronavirus vaccination rate in mostly-Black Prince George’s County, Maryland. Only 4 percent of that county’s population has received a first dose of the vaccine, the lowest percentage in the state. Yet, PG County is the Maryland county hardest hit by the pandemic, according to the Post.

Is PG County’s low vaccination rate due to racism or discrimination against Blacks. I don’t think so, and don’t read the Post’s article as making a case that it is.

I live in Montgomery County, yet was vaccinated in neighboring PG County. My experiences in this regard can perhaps shed light on the shortfall in vaccinations of residents in the latter jurisdiction.

My first experience with Prince George’s County vaccination occurred in mid-January. On a Maryland government website, I learned that vaccinations would be given at a large facility in PG County to people in my age group.

The website did not say that appointments were reserved for residents of that county. My wife and I were able to make appointments for mid-February even though, in response to a question, we identified ourselves as Montgomery County residents.

I have no problem with PG County wanting to vaccinate its own residents first at its facilities. However, if that was the desire, it shouldn’t have accepted applications from people like me who identified as being from out of county. This was a clear case of incompetence by the PG County government.

After our appointments were cancelled, I was able to schedule my wife for vaccination on February 1 at a pharmacy in Montgomery County. But when I tried to schedule myself, all slots were taken.

I therefore registered with a private health care organization that was scheduled to offer the vaccine at three clinics — two in Montgomery County and one in Prince George’s. Those who registered were told we would be notified by email when appointments became available for people in the age 65-74 category.

Notification came last Tuesday night at around 8:30. However, I was not online at the time.

Fortunately, my younger daughter heard about the opening and contacted me around 9:30. By then, all openings at the Montgomery County clinics had been filled. However, we were able to schedule a shot at the PG County clinic for Thursday afternoon (February 4). As a private clinic supplied (as I understand it) with vaccine by the state, not the county, reservations were not limited based on county of residence.

At the clinic in PG County on Thursday, I saw about 50 people, either in line waiting or exiting the clinic having been vaccinated. At most, 10 percent of them were Black. Of the much smaller group of people to whom I spoked, a majority were from Montgomery County.

Thus, my experience is consistent with the Post’s report that Blacks in PG County aren’t being vaccinated at the rate one might expect given their representation in the population. But why? The obvious explanation is that PG County residents generally, and Blacks in particular, aren’t signing up for openings or aren’t doing so as quickly as others.

But why? I understand that there is a gap between the poor and the non-poor when it comes to computer access and savvy. However, I doubt that this gap is close to large enough to explain the near absence of Blacks in line for vaccination at the PG County clinic on Thursday.

But why are Blacks less desirous of the vaccine, even in a county that has been particularly hard hit by the virus? Because, as I warned two months ago, many Blacks are suspicious of the vaccine. According to the Post, some believe vaccination is part of a sterilization campaign. Reportedly, “there is a big fear in the African-American community on vaccines [in part] because of the Tuskegee study.”

But the Tuskegee study is ancient history, from an America vastly different than today’s. It’s only relevance to contemporary America is as a talking point for those who want to convince Blacks that “Whitey” is out to get them.

Here, then, is the first lesson from the vaccination campaign in this context: Indoctrinating Blacks with the “America-is-systemically-racist” line is harmful to their health.

Here’s a second lesson, this one drawn from my experience getting vaccinated early for my age group in Maryland: Don’t be dependent on government. If you rely on the government to sign you up for vaccination, you might have a fairly long wait.

As with almost everything else in life, individual initiative matters for purposes of getting vaccinated sooner rather than later. Unfortunately, governments at all levels want people to depend on them. It increases their power.

The third lesson is: Elect competent government leaders. Initiative matters, but so does good government. As described above, PG County’s executive initially opened up the county’s vaccination facilities to all Maryland residents and then changed her mind. If she had reserved places for county residents to begin with, more of them would be vaccinated.

The final lesson is: Family matters. Luck played a considerable role in my wife and I getting vaccinated early. But so did family.

I signed my wife up. My daughter signed me up. Without our solid family structure, it’s unlikely that both of our two eligible family members would have a received a shot yet — luck or not — given the rate at which openings are gobbled up.

The four lessons set forth above are of general applicability. They are also obvious.

It should go without saying that the anti-White portions of the BLM narrative are counterproductive BS; that over-reliance on government is detrimental; that it’s important to elect officials based on competence, not identity politics; and that a strong, stable family produces all manner of benefits to its members.

Yet, these propositions have fallen out of favor to one degree or another. Indeed, espousing some of them might get you in trouble with your friends, your school, and maybe even your employer.

Still, even if you don’t espouse them, it’s important to keep them in mind.