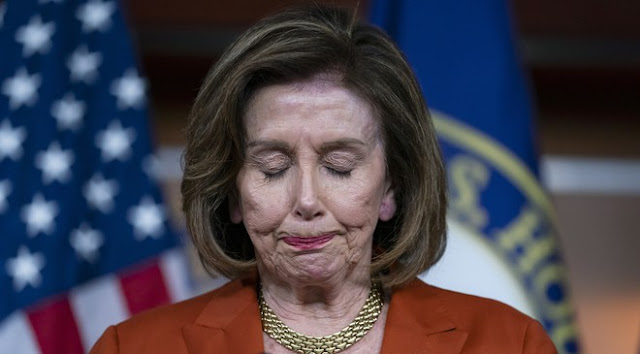 We’re down to the wire in Election 2022, and stuff just got real.

Today’s news takes us to deep blue Oregon, where onetime shoo-in Kurt Schrader just got the rug pulled out from under him by his own Democrat Party as he fights off Republican Amy Ryan Courser. According to AdImpact (as spotted by Josh Kraushaar), party ad spending for Schrader in the 5th district was shifted to the 6th to boost Andrea Salinas against Republican Mike Erickson.

Maybe you’re thinking this kind of thing happens all the time, and it does.

If 10-and-up is the Democrats’ new firewall, they’re in bigger trouble than even I imagined. Complicating things even more for Oregon Democrats, gubernatorial candidate Tina Kotek (looking to replace the outgoing and execrable Kate Brown) regularly polls behind Republican Christine Drazan.

Will Drazan have the coattails to pull along Courser and maybe even Erickson?

I guess we’ll know in about 19 days — although this being a three-way race, coattails may be difficult to find.

It could very well be that Oregon is a special case since Portland has served as Ground Zero for some of the craziest progressive ideas being put into terrible practice.

On Monday I reported for you that right here in Colorado, various dark money groups were busy propping up incumbent Democrat Michael Bennet’s senate campaign, even though he’s supposedly eight points up on GOP challenger Joe O’Dea.

The point isn’t that voters are going to kick Bennet to the curb (as he so richly deserves) or turn Oregon red. The thing to remember though is that every dollar spent on “safe” races like the ones in Oregon and Colorado is a dollar not spent on closer races like Arizona and Georgia.

And in the closing weeks of the campaign, Democrats are having to spend in places they had previously assumed were safe as houses.

The Los Angeles Times warned on Monday that national Democrats seemed to have abandoned Tim Ryan in the Ohio Senate race against J.D. Vance.

“We don’t have the national support that we want,” Ryan complained last week.

National Democratic officials say the party’s funding decisions have been a matter of hard-nosed calculation — nothing personal.

The party’s first responsibility is to protect endangered incumbents like Sens. Raphael Warnock in Georgia and Catherine Cortez Masto in Nevada, they argue.

Nationwide, Republicans currently lead on Monmouth’s generic ballot by six points. That in and of itself is remarkable, but it becomes stunning when you see that 50% of voters prefer the GOP, instead of the more-typical 42- or 43-point ceiling in a winning year. That Monmouth poll isn’t much of an outlier, either, with Hart, Harris, and Rasmussen all reporting similar results.

But it gets worse. Check out these numbers for parents: 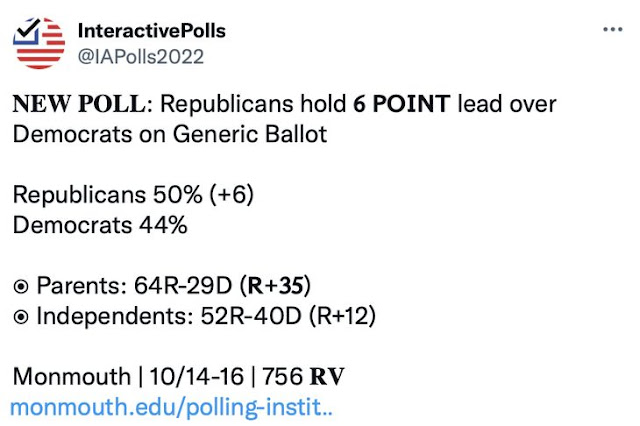 Parents, who have deeper roots in their communities and are more likely to vote than singles are, are breaking R+35.

All of this comes not much more than a week after Slate declared that “Democrats are not spending big, but they are spending smarter. More specifically, they have broken out of their fixation on lavishing money on no-shot candidates in ruby red states.”

Except now, some of those “no-shot candidates” are in sapphire blue districts.

Finally, let’s wrap up today’s column with yet another non sequitur from you-know-who.

Hey, everybody knows Giselle is the de facto candidate.

And nobody knows what Joe is doing — especially not Joe.

Chins up, happy warriors. I’m not getting cocky about November 8, but the Democrats sure have me feeling good.