What We Know about David DePape, the Man Accused of Attacking Paul Pelosi 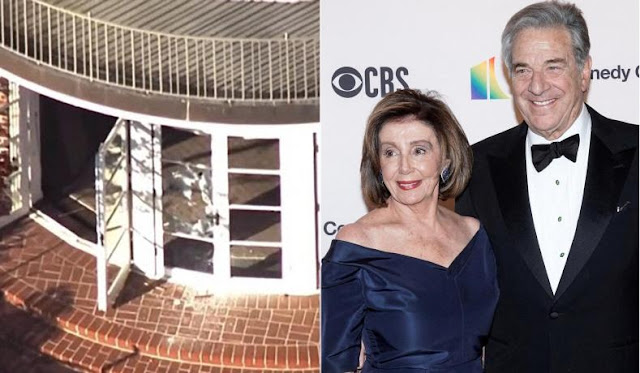 Left: A screen grab taken from a video shows the damage to the home of House Speaker Nancy Pelosi (D., Calif) after her husband Paul Pelosi was violently assaulted during a break-in at their house in San Francisco, Calif., October 28, 2022. Right: Nancy Pelosi and her husband Paul Pelosi arrive for the 42nd Annual Kennedy Awards Honors in Washington, D.C., December 8, 2019. (KGO TV via ABC via Reuters, Joshua Roberts/Reuters)

The man accused of breaking into Nancy Pelosi’s home early Friday and attacking her husband with a hammer appears to have a history of affiliations with nudists and conspiracy theorists, and sometimes strange beliefs that fall all over the cultural and political map.

Online records about David Wayne DePape are sparse, but he has appeared in a few San Francisco-area news stories over the years, and he appears to have sporadically updated a blog where he wrote about religion, conspiracies, aliens, and censorship.

DePape, 42, was named in a 2008 Oakland Tribune story, when he and a woman named Gypsy Taub – a former stripper, nudist activist, and a 9/11 conspiracy backer originally from Russia – attended a community Thanksgiving meal with “their three small children.” DePape and Taub told a reporter it was their first time at the event, and they spent their time there “eating, dancing, socializing and showing good cheer to strangers,” the paper reported.

“We like to meet our neighbors,” Taub said. “I want my children to learn that everyone is a human being and a friend. I also want my kids to learn about sharing. In Russia, where I’m from, people share more, and I want my kids to grow up knowing sharing.”

It is not clear if DePape and Taub were ever actually a couple. In 2013, SFGate.com published a story about Taub’s plan to get married in the nude during a ceremony on the steps of San Francisco’s City Hall. But not to DePape. Rather, she was marrying a man named Jaymz Smith, who was “half her age, minus two,” according to the outlet. She said she was attracted to Smith because he had the spirit of “her long-dead lover Sergey, reincarnated.”

But DePape appears to have been included in the nuptials. A man who appears to be DePape – spelled in the story as dePappe – was described as “a hemp jewelry maker and father figure who will double as best man.” The story states that Taub, Smith, DePape, and Taub’s three kids, all lived together in a “an upstairs Berkeley Victorian flat that is perpetually freezing.”

It does not appear that DePape is the biological father of Taub’s children, who all have the surname “Gonzalez.” Neither Taub nor her oldest two children appear to have posted about DePape or his arrest on their Facebook pages Friday. Attempts to reach them for comment were unsuccessful.

Taub declined to go into detail about her relationship history or her children’s lineage with a SFGate reporter in 2013.

“If you want to enumerate all of the relationships I’ve had, it might take up a lot of space in the newspaper,” she says, laughing. “I’ve had a very exciting life with a lot of passion and a lot of drama. Let’s put it that way.”

DePape appears to have sporadically published to a blog, godisloving.wordpress.com, where he wrote about God’s love, and railed against censorship, communists, and the “elites/ruling class.” The blog is titled “Welcome to Big Brothers Censorship Hell.”

“The founding father built in protection against censorship coming from the goverment [sic] because they never imagined a day when Tech giants and private industry would be so powerful they could single handedly silence the people,” the blog states.

The 2022 posts – mostly memes and videos protesting government censorship – are more political in nature, though not specifically partisan. One meme read, “Exposing communist collusion to push a pro communist propaganda narrative is against Big Brothers guidelines. You need to sit down and shut up and swallow our [expletive] communist opinions. Those who do not comply will be censored off the internet and have their livelyhoods [sic] destroyed.”

He posted headlines, including “Communist voodoo science,” “Aliens,” “Feminists get owned,” and “The woke are Racists with a guilty conscience,” though most of the posts had no text when they were reviewed by a National Review reporter. The blog appears to have since been suspended.

One headline simply read “Q.” The San Francisco Chronicle wrote the headlines “invoke conservative beliefs or conspiracy theories promoted in far-right circles,” but the paper also reported that, “Voting records show DePape listed himself as a member of the Green Party years ago.”

CNN reported that DePape’s Facebook page, which has since been suspended, included links to videos by MY Pillow CEO Mike Lindell alleging that the 2020 election was stolen from Donald Trump, and videos with titles like “Democrat FARCE Commission to Investigate January 6th Capitol Riot COLLAPSES.” He also made posts claiming that Covid-19 vaccines were deadly, and images that CNN deemed “transphobic.”

His stepfather told CNN that DePape grew up in British Columbia, but left Canada for California 20 years ago to pursue a relationship. Acquaintances described DePape as “very odd,” and said he had been exhibiting concerning behavior. Over the years, DePape has lived in storage units and sheds, CNN reported.

According to San Francisco police, DePape entered the Pelosi residence through a sliding glass door and screamed, “Where is Nancy?” Officers who arrived on-scene shortly after the break-in saw DePape and Paul Pelosi wrestling for a control of a hammer. DePape  ripped the hammer out of Pelosi’s hand and hit him over the head with it.

Officers then intervened, disarmed DePape, and arrested him. He is being booked into jail on charges of  attempted homicide, assault with a deadly weapon, and other felonies.