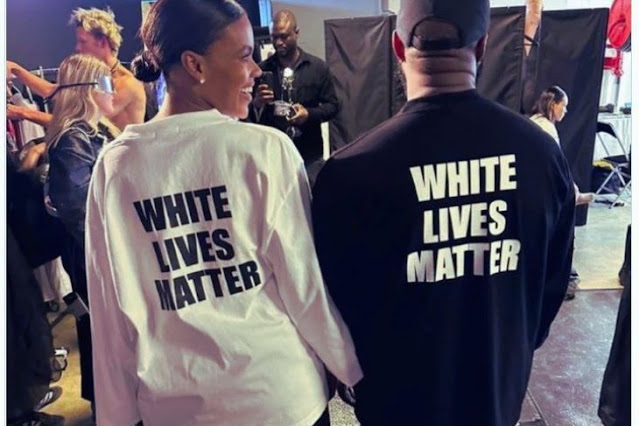 The artist formerly known as Kanye West could give conservatives lessons on how to trigger the Left without breaking a sweat.

Now legally known as “Ye,” the mogul rapper, designer, political disruptor, and raconteur first became famous for his music. Now Ye is infamous for his embrace of MAGA, his “Sunday Service” religious fervor, his recent foray into politics, and his rocky marriage to Kim Kardashian. In 2013, Ye broke the internet when he threw up a $120 white T-shirt for pre-sale to promote his merger of Yeezy brand with French brand A.P.C.

The shirt sold out within hours.

But Monday’s shenanigans went way beyond that, and the meltdowns have been epic.

Ye appeared in Paris for Fashion Week and did a surprise show for his Yeezy Season 9 collection. Ye and his invited guest, The Daily Wire’s Candace Owens, both sported long-sleeved T-shirts that read, “White Lives Matter.”

Apparently, the models sporting his line also had similar shirts.

Kanye West is making a statement.

The rapper staged a surprise Yeezy fashion show on Monday in Paris, showcasing his Season 9 collection to much fanfare.

Before the models appeared, West gave a speech while wearing a “White Lives Matter” T-shirt emblazoned with the Pope’s face on the front and the same bedazzled flip-flops he sported last week.

I guess this transcends Ye wearing a MAGA Hat and his visit to the Trump White House. People are truly triggered.

Watching the Throne
@KanyePodcast
Seeing Ye and Candace both in that shirt hurts my soul. Whatever nuance there was as part of his fashion show pales in comparison to seeing someone who is so politically destructive and reprehensible standing there with Ye, emblazoned with that phrase.

Lack of melanin, and the fact that Ye feels these people matter is quite the issue with this bunch. They probably would have given Ye the side eye if his shirt said, “All Lives Matter,” but the specific focus of this message is causing heads to explode. One blue check publication failed to use a dictionary before tweeting to look up the meaning of the word, “fascism.” The last time I checked, Ye was not part of the government, and Yeezy is not a fashion brand endorsed by the government. However, Ye is stupid rich and knows how to make (and keep) his dollars. Ye also knows how to flip the bird at certain factions, without actually flipping the bird.

Ye’s speech before the runway show was free association, as is his style.

He referenced his ex-wife Kim Kardashian’s 2016 Paris robbery, his former manager Scooter Braun, the struggles he faced entering the fashion industry, his recent fallout with Gap and much more.

“I am Ye, and everyone here knows that I am the leader,” he said at one point, referencing his new legal name. “You can’t manage me.”

Ye is indeed a leader, and totally unmanageable, which makes this all the more delicious that the Left is having conniption fits. In 2005, when “Kanye” was screaming on public television that President George W. Bush hates Black people, he was cheered and applauded.

Then Ye publicly embraced that Bad Orange Man, and well… the Left blamed mental illness and acted as though he had a communicable disease. They couldn’t destroy him fast enough or vociferously enough. He was off the reservation and he had to be stopped.

They didn’t succeed, thanks to that stupid rich part and the fact that Ye lives who he is, and doesn’t seek approval or permission. Love him or hate him, he will stand for what he believes. Ye may have distanced himself from Trump and the MAGA associations, but he is still outspoken about freedom of speech and the evils of abortion.

USA Today gave more attention to his speech and his business focus:

He continued at another point: “People feel like they have the right to come to my face and call me crazy, like it doesn’t hurt my feelings, or like you don’t have to be crazy in order to change the world.”

The rapper and fashion designer has made headlines in the last month for a public breakup with Gap. He told Vogue Business in an interview published Monday ahead of the show that he now plans on running Yzy as a vertically integrated business. “Even George Lucas had issues with Disney,” he told the outlet. “And now we’re here, and Yzy is established on its own.”

The social media bastion known as #BlackTwitter has also been going nuts. Ye has replaced mythical creatures and celebrities playing historical artifacts as the subject of their fire tweets.

Ye is on a whole other level, very similar to Elon Musk. Ye has enough F-U money, creativity, and street creds that it doesn’t matter what other people think. As he said above, he cannot be managed.

Ye is also a shrewd businessman. You don’t garner a net worth of 6.6 billion and growing without having that acumen. Like Musk, Ye is adept at playing to his followers and playing the media to his advantage. Every commentary about his fashion event is looking for a “statement” about the tees. It doesn’t take a genius to know that Ye received more in marketing and advertising than he could have paid Madison Avenue to get. The fact that Ye is shopping for a new partnership after dropping his deal with Gap should also not be lost on observers. This move culls the herd for only the true believers and the committed to need to apply.

Savvy and a bit Savage.

I do not care whose name is on it, I am not stupid rich, so would not pay stupid money for that t-shirt. But once Ye strikes that retail partnership he is seeking, we’ll see whether his statement goes beyond clever marketing to a movement.