Poll: The Shy Trump Vote Is Bigger This Year...And Who Falls Into This Category Should Terrify Democrats 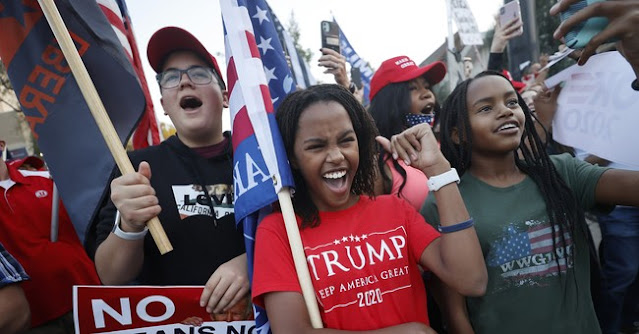 I’ll say it again, folks. The polling is screwed. It’s skewed. It’s a mess. Either we’re right to be highly skeptical and Trump wins an Electoral College landslide, or the pollsters are right and we’re heading for Armageddon come Election Day.

Still, the oversampling of Democrats, college-educated voters, and suburban Republicans hostile to Trump should bring a ton of scrutiny. The reluctance for some of these clown firms to switch to likely voter samples is also suspect. We’re not going to have a 2008 or 2012 electorate.

For starters, a new Hill-Harris poll noted that young Americans are not excited about this election at all. They’re not planning on voting. Gallup reportedly said that youth interest in voting this cycle hit its lowest levels since 2000. That’s in keeping with the results from Democracy Institute’s Patrick Basham, whose polling data, which has been mentioned in The Washington Times and Forbes, suggests there will be 1 million fewer young people voting this cycle.

Basham spoke with Joseph Cotto about his new data. PollWatch had a good thread summarizing the interview. Democracy Institute's poll had a sample size of 1,500 likely voters, where Trump lead Joe Biden by one point. He also noted that the “shy Trump” vote is very much alive and will be bigger this time.

Suburban white women and urban black women are the two groups that are most likely to fall into the shy category for the 2020 cycle. That latter part should shake Democrats to their core.

And as for Florida, a state that Biden must carry, it could already be out of his reach. Basham noted Trump cannot fall asleep at the wheel, but things are becoming more comfortable for him in the Sunshine State. And based on some recent polling from the state, it looks like the tide has shifted solidly in favor of the president.

Over the summer, the pollsters at CNN even noted that should Biden fail to retake Florida on election night, his chances of winning the race dip below 50 percent.

Some call them shy Trumpers, while others call them 'sleepers.' I prefer the latter term to be honest, but this group coupled with Trump Democrats, which are said to also be in greater numbers this year is excellent news amid a slew of suppression polls from the liberal media. 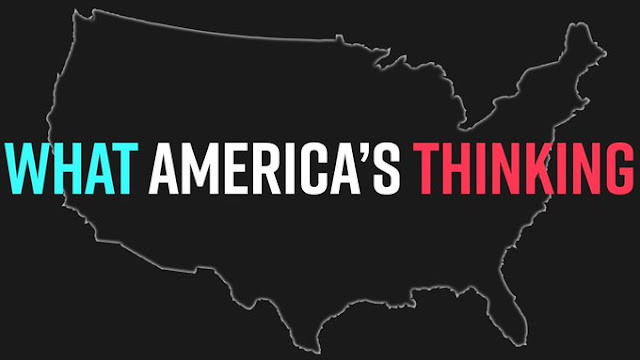 1) Nuggets from Joseph Cotto’s interview of Patrick Basham of Democracy Institute. A DI poll showed Trump winning nationally and in the Electoral College: Basham addressed why Trump’s national lead went from +3 to +1 and why Trump’s Battleground State lead went from +7 to +4.

2) It was because Democracy Institute shifted from a 2-way to a 4-way race. He believes some are “parking their votes” with 3rd-party candidates. He senses some of these will move back to Trump or Biden, with more going to Trump. He also thinks more undecideds will go for Trump.

4) “Those are votes for Trump that if they come in are going to surprise people because they are the ones who are least expected to support him.” There is even a shy Trump vote in MD-7 (Kim Klacik district) Says Klacik is doing great in the race.

5) On YOUNGER VOTERS: “We believe . . . there are going to be significantly fewer younger voters.” “We think there will be at least a million fewer votes from that group in total.”

6) OTHER NOTABLES: New Hampshire is a mini-Minnesota. The war and peace issue is big in NH. NH likes Trump's refusal to go to war. Trump is “in very very good shape there [NH].” Trump is leading in Penn. “There will be a greater number of Trump Democrats in 2020.”

7) Trump with a significant 4-pt lead in Arizona: Recent Republican registration gains in AZ and the new Trafalgar poll showing Trump +4 in AZ, are good news for Trump. It will be tight, but it's looking more likely Trump will carry Arizona - Trump 47.8 and Biden 43.8. 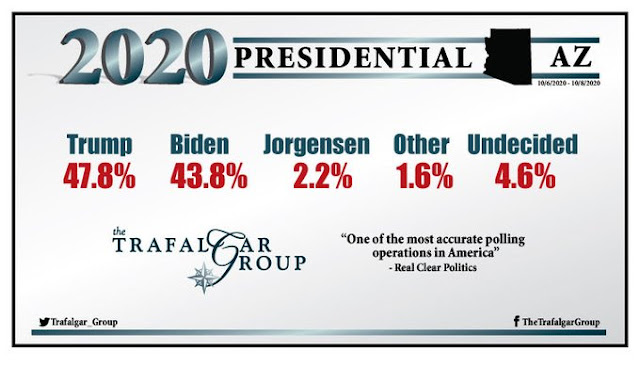 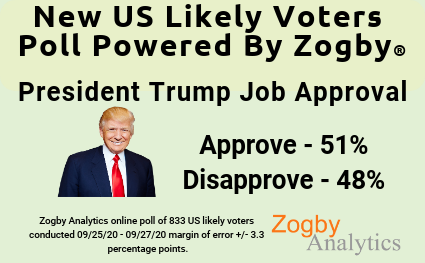 Gallup found lowest level of interest from youth vote since 2000.