Trump says he will be discharged from Walter Reed, return to White House Monday evening 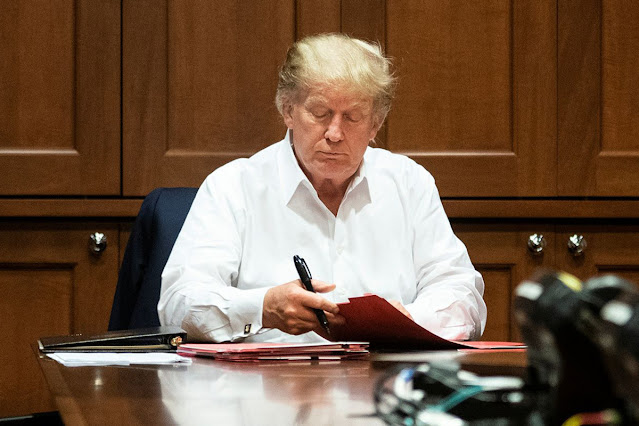 President Trump said he will be discharged from Walter Reed Military Medical Center Monday evening and will return to the White House.

"I will be leaving the great Walter Reed Medical Center today at 6:30 P.M," Trump tweeted. "Feeling really good! Don’t be afraid of Covid. Don’t let it dominate your life. We have developed, under the Trump Administration, some really great drugs & knowledge. I feel better than I did 20 years ago!"

Trump's comments come just before White House physician Dr. Sean Conley is set to brief the press on the president's health at 3:00 p.m.

White House chief of staff Mark Meadows on Monday morning said he was “optimistic” that the president would be discharged from Walter Reed by Monday afternoon.

“Spoke to the president this morning,” Meadows said. “He continued to improve overnight and is ready to get back to a normal working schedule.”

He added that the president “will meet with his doctors and nurses this morning to make further assessments of his progress.”

Meadows added, “We are still optimistic that he will be able to return to the White House later today, with his medical professionals making that determination later today."

The president, upon being admitted to Walter Reed, had a fever, and according to a senior White House official, there was “real concern” about his “vitals.”

A normal blood oxygen reading is between 95 and 100. Conley said that Trump had a “high fever” and a blood oxygen level below 94% on Friday and during “another episode” on Saturday.

But on Saturday, Conley said the president’s cardiac, kidney and liver functions were normal, and that the president was not on oxygen and was not having any difficulty breathing or walking.

Conley said over the weekend that the president had received an antibody cocktail, as well as zinc, Vitamin D, famotidine, melatonin and a daily aspirin. He also said Trump was taking a five day course of Remdesivir.

“After testing negative consistently, including every day since Thursday, I tested positive for COVID-19 on Monday morning while experiencing no symptoms,” McEnany said in a statement. “No reporters, producers, or members of the press are listed as close contacts by the White House Medical Unit.”

The president and first lady announced they tested positive for COVID-19 early Friday, just before 1:00 a.m., after it was revealed that Hicks tested positive on Thursday.