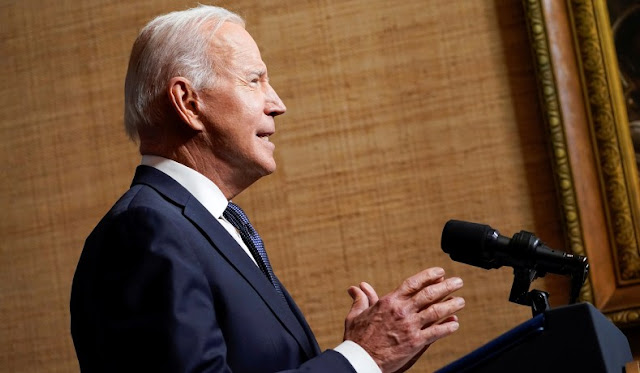 The woke revolution in the classroom is about to go federal. In an early but revelatory move, President Biden’s Department of Education has signaled its intent to impose the most radical forms of Critical Race Theory on America’s schools, very much including the 1619 Project and the so-called anti-racism of Ibram X. Kendi. (Kendi’s “anti-racism” — which advocates a massive and indefinite expansion of reverse discrimination — is more like neo-racism.) Biden is obviously co-opting conservatives’ interest in reviving traditional U.S. history and civics to deliver its perfect opposite — federal imposition of the very ideas conservatives aim to combat.

Biden’s Department of Education has just released the text of a proposed new rule establishing priorities for grants in American History and Civics Education programs. That rule gives priority to grant “projects that incorporate racially, ethnically, culturally, and linguistically diverse perspectives.” The rule goes on to cite and praise the New York Times’ “landmark” 1619 Project, as well as the work of Critical Race Theorist Kendi, as leading examples of the sort of ideas the Biden administration wants to spread.

The programs immediately targeted by Biden’s new priority criteria for American history and civics grants are small. Once in place, however, those criteria will undoubtedly influence the much larger and vastly more dangerous “Civics Secures Democracy Act.” That bill would appropriate $1 billion a year, for six years, for history and civic education. Support for leftist “action civics” is already written into the priority criteria of the bill itself. I have argued that additional anodyne-sounding priority criteria in the Civics Secures Democracy Act — criteria favoring grants targeted to “underserved” populations and the mitigation of various racial, ethnic, and linguistic achievement gaps — would be interpreted by the Biden administration as a green light to fund Critical Race Theory in the schools. The new draft federal rule for grant priority in American history and civics education makes it clear that this is indeed the Biden administration’s intent.

The Biden administration’s interest in pushing Critical Race Theory on America’s schools could already be gleaned from the president’s repeated endorsement of the notion that America is “systemically racist.” Biden’s statements to that effect are actually cited in the new federal rule. It’s of interest as well that the new rule explicitly endorses the wave of woke Critical Race Theory currently sweeping through America’s schools. Biden’s new American history and civics rule also expresses support for “Culturally Responsive Teaching,” the ultra-woke and utterly politicized pedagogy derived from Critical Race Theory that was recently imposed on teachers in Illinois.

At this point, the sprinkling of congressional Republicans and conservative education establishment figures who have foolishly bought into bogus “bipartisan” efforts to revive the teaching of American history and civics need to repudiate their misbegotten alliances. We needn’t wait to see how the Biden administration will implement federal efforts to support American history and civics. This new rule tells us all we need to know. We are set for a huge showdown over federal efforts to press leftist action civics and Critical Race Theory on the states. Here is what needs to be done.

Above all, the federal “Civics Secures Democracy Act” must be stopped. Just as a combination of Obama’s Race to the Top grant program and federal regulations managed to impose the abysmal Common Core standards in math and English on nearly every state, the Civics Secures Democracy Act is designed to impose leftist action civics and Critical Race Theory on even red states. The state-level grant money is large enough that the leftist education bureaucrats who dominate even in red states will have a clear field to apply for federal funding. If conservative governors push back against grants that commit an entire state’s education system to action civics and Critical Race Theory, they will be slammed by Democrats, the education establishment, and the media for refusing badly needed federal dollars. Former Texas governor Rick Perry managed to hold off Common Core by refusing to apply for Race to the Top grants, but he was mercilessly pummeled by critics for turning down that money. Few red-state politicians will have the guts to stand up to such pounding.

That is why it is urgently necessary for states to pass laws barring action civics and Critical Race Theory from the K-12 curriculum and teacher training. Without such laws in place, it will be almost impossible to resist the carrots and sticks soon to be deployed by the Biden Education Department with the aim of forcing action civics and Critical Race Theory onto America’s schools.

I have offered model state-level legislation published with the National Association of Scholars that would bar action civics and Critical Race Theory training for K-12 teachers. Some legislators in Texas have taken up that proposal and added a bar on Critical Race Theory in the K-12 curriculum.

There are some legitimate concerns about barring the core ideas of Critical Race Theory from the K-12 curriculum. It is a mistake, however, to see such proposals as interfering with free speech or academic freedom. Barring advocacy of Critical Race Theory from courses in public universities would indeed violate academic freedom and freedom of speech. I oppose such state-level moves, although I do think it’s possible to bar Critical Race Theory-based training outside of the classroom for faculty, staff, and students at public universities. At the K-12 level, however, states and school districts enjoy considerable authority over curriculum. K-12 teachers have very limited free-speech rights when carrying out their classroom responsibilities, at which time they are rightly charged with teaching from the approved curriculum.

That is not to say that barring the advocacy of certain theories or ideas from the K-12 curriculum by state law is free of danger. For one thing, it’s important to give due deference to local control over curriculum. The best way to live with our differences is to keep curricular decisions at the local level to the greatest extent possible.

One of the problems with the new, ultra-woke Illinois teaching standards mentioned earlier is that they impose Chicago’s radicalism on conservative districts downstate. That speaks for local control. Yet the Illinois example cuts both ways. Given that state education bureaucrats have gone far beyond what state law actually authorizes and have cooked up an overreaching rule imposing Critical Race Theory on an entire state, it’s clear that legislatures across the country must now consider defensive measures lest state education bureaucrats (almost invariably far more left-leaning than voters) impose Critical Race Theory via statewide standards or regulations.

Another risk of barring certain concepts from the curriculum is that the prohibition could create martyrs; messy enforcement situations with he said/she said accusations between students, parents, and teachers; and a “banned in Boston” glow for ideas that are barred.

Against these risks, however, is the fact that we are talking about teaching young children to feel guilt and anguish simply because of the color of their skin. While I worry about the expansion and abuse of “hostile environment” law, forcing confessions of guilt based on skin color onto a captive audience of public school children really does seem to represent a hostile educational environment in violation of the Fourteenth Amendment and Title VI of the Civil Rights Act.

And now, between the massive grant-giving machine authorized by the Civics Secures Democracy Act and the new federal rule boosting American history and civics grants that promote the most radical forms of Critical Race Theory, states would be foolish not to protect their schools from the coming onslaught. States must now adopt laws barring both action civics and Critical Race Theory from K-12 education. With the federal juggernaut bearing down, what choice do states have but to defend themselves?

STANLEY KURTZ is a senior fellow at the Ethics and Public Policy Center.