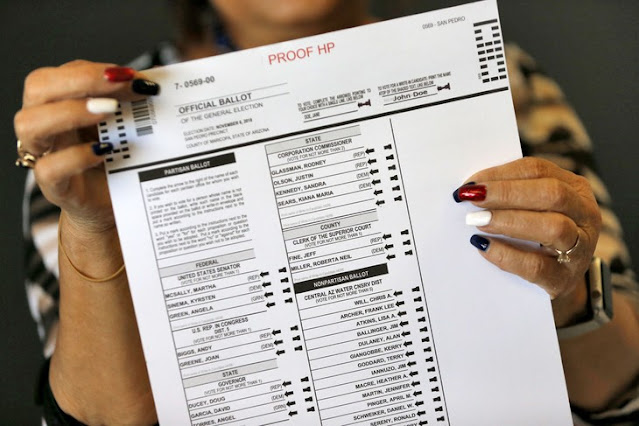 In this Wednesday, Oct. 31, 2018 photo, Maricopa County Elections official Joanne Tillson instructs election volunteers on ballots issues during a training session in Phoenix. The elections chief for the Arizona county that includes Phoenix is pledging that voters won’t face the same difficulties they experienced in August’s primary when dozens of polling locations opened late. Maricopa County Recorder Adrian Fontes said this week elections county employees instead of contracted workers will set up the voter check-in machines that were not put in place on time on Aug 28. (AP Photo/Matt York)

Earlier this month, the Arizona Senate leadership hired a team of independent auditors to complete a “comprehensive, full forensic audit of the 2020 election in Maricopa County, including a hand recount of all ballots.” Despite the efforts of the state Democratic Party to thwart it, the audit is proceeding.

Maricopa County Superior Court Judge Chris Coury had ordered the Arizona Senate to “pause” the audit if the Arizona Democratic Party would post a $1 million bond to cover the costs of the delay. The party refused to so.

The Trump campaign sued Arizona election officials last year, alleging irregularities in Maricopa County, a county Donald Trump won in 2016. According to state-certified results, Biden won the county by just over 45,000 votes and barely won the state by a 10,457-vote margin. If the audit discovers the alleged irregularities, it could prove that Trump is the legitimate winner of Arizona, and it could have huge implications for other states where irregularities were discovered.

The Arizona Republican Party was pleased by this latest development. “Democrat’s bluff called and they fail to post a $1million bond to stop forensic audit,” the state GOP tweeted.

“The Democrats are ‘swarming’ the Great State of Arizona trying to get the Forensic Election Audit stopped, because only they know exactly what they’ve done, and they understand Voter Fraud far better than anyone,” he said in a statement Friday night. “This could be Voter Fraud at the highest level. Don’t think that Arizona is the only State.”

On Saturday morning, Trump called for “large-scale security” for the team conducting the audit.

“The Republican Party is demanding that Governor Ducey of Arizona immediately provide large-scale security for the brave American Patriots doing the Forensic Audit of the 2020 Presidential Election,” Trump said. “Governor Ducey will be held fully responsible for the safety of those involved. State police or National Guard must be immediately sent out for protection. The Democrats do not want to have this information revealed, and they will do anything to stop it. Governor Ducey must finally act!” 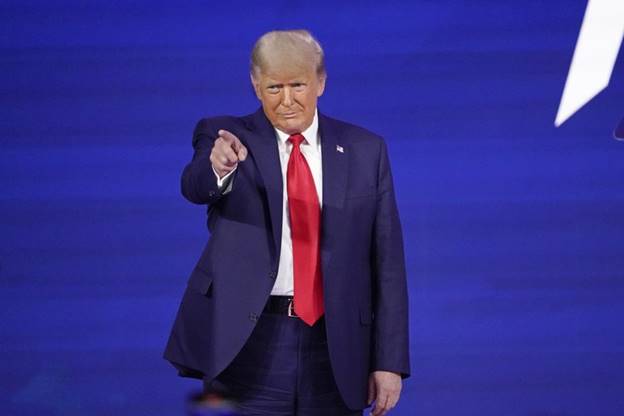 A judge in Michigan has vindicated President Trump by ruling that Secretary of State Jocelyn Benson, a Democrat, broke state law when she unilaterally changed election rules concerning absentee balloting in the 2020 election. This ruling legitimizes a key claim made by the Trump legal team in its challenges to the 2020 election.

The court made the following conclusion:

Over 3.1 million Michiganders voted by absentee ballot in November. Biden “won” the state by just over 154,000 votes, according to the state-certified results.

“I’m glad the court sees Secretary of State Benson’s attempts at lawmaking for what they are – clear violations of her authority,” said State Rep. Matt Hall, a Republican. “If she wants to make changes like these, she needs to work with the Legislature or properly promulgate them through the laws we have on the books.”

“The Legislature is an equal branch of government charged with crafting laws,” Hall continued. “This is not the role of the Secretary of State, and there is a clear process that must be respected. Unfortunately, Secretary of State Benson has a pattern of not respecting that process. She issued a mandatory directive requiring local election officials to apply a presumption of validity to all signatures on absent voter ballots, but there is nothing within state law allowing for that type of power from her position. As a result, this directive was found to be not in accordance with our laws and not valid.”

Michigan was not the only state where Democrat state officials unilaterally changed election laws, so this ruling certainly raises legitimate doubts whether Biden truly won the election without invalid votes.