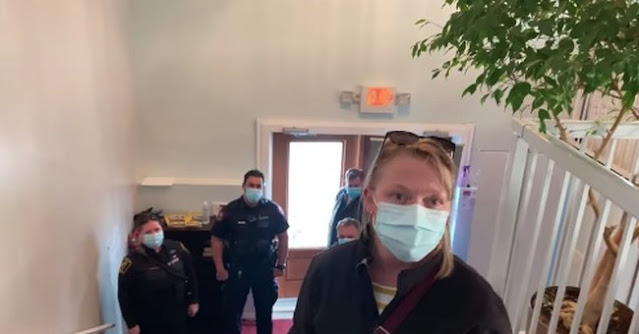 Calgary police were met with resistance when they attempted to shut down a Good Friday church service for violating COVID restrictions. Artur Pawlowski, the pastor at The Cave of Adullam, told police to leave and not return until they have a search warrant in hand.

"You come back with a warrant," Pawlowski said. "Out! Out! Out!"

Police were hesitant to leave but the pastor wasn't backing down. "Out of this property, you Nazis!" Pawlowski shouted. "Gestapo is not allowed here!"

As police left the property, Pawlowski told them "not to come back, you Nazi psychopaths."

"Unbelievable sick, evil people. Intimidating people in a church during the Passover! You Gestapo, Nazi, communist fascists! Don’t you dare come back here!” he shouted as they walked away.

The pastor turned the camera to face him.

“Can you imagine those psychopaths? Passover, the holiest Christian festival in a year and they’re coming to intimidate Christians during the holiest festival? Unbelievable," Pawlowski said. "What is wrong with those sick psychopaths? It’s beyond me. Wow. Wow. How dare they?"

“Unbelievable. We’re living in a total takeover of the government with their thugs, goons, the brown shirts, the Gestapo wannabe dictators,” an incredulous Pawlowski said. “Coming to the church armed with guns and tasers and handcuffs to intimidate during Passover celebration? Well, I guess that’s what it is, they want to enslave us all like the Egyptians did. They want to be the Pharaohs of today, that’s what they’re doing. Unbelievable. People, if you don’t stand up, wake up, wow. I don’t know what will happen tomorrow.”

The pastor warned about Germany, where "wannabe Hitlers are already ruling" and fascism is reigning once again. He took particular issue with the country's lockdown.

He referenced the COVID passports that are being talked about and potentially implemented.

According to the pastor, the time to stand up and push back against the out-of-control government is now.

CLICK HERE TO VIEW THE VIDEO OF THE PASTOR.