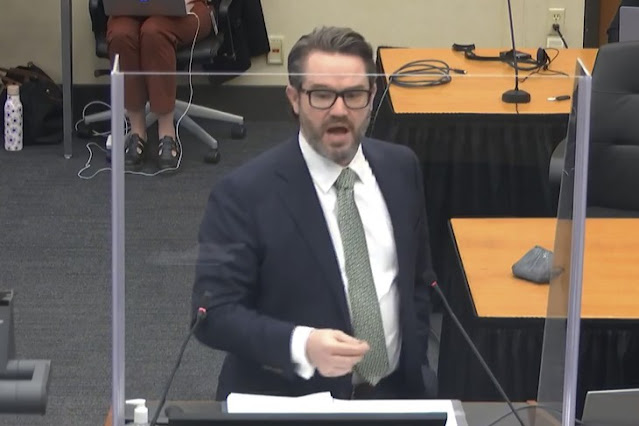 In this image from video, defense attorney Eric Nelson gives closing arguments as Hennepin County Judge PeterÂ Cahill presides Monday, April 19, 2021, in the trial of former Minneapolis police Officer Derek Chauvin at the Hennepin County Courthouse in Minneapolis. Chauvin is charged in the May 25, 2020 death of George Floyd. (Court TV via AP, Pool)

The Associated Press reported that the jury has reached a verdict, which the judge read just after 5 p.m. Eastern.

Black Lives Matter and antifa activists are likely to protest and even engage in violent rioting regardless of the guilty verdict. On Monday night, after the case was handed to the jury, protesters marched and a church was set on fire, although the cause of the fire remains unclear. Last week, after a police-involved shooting, riots broke out in a city nearby, illustrating just how much of a powder keg Minneapolis is.

Cities are preparing for another wave of unrest similar to the riots following the death of George Floyd. Those riots damaged no fewer than 700 buildings in Minneapolis last year — with twelve structures “wholly destroyed,” i.e. burnt to the ground. Tragically, the riots ostensibly aimed at combatting racism destroyed black lives, black livelihoods, and black monuments.

While Americans should hope and pray for impartial justice, Rep. Maxine Waters (D-Calif.) demanded a guilty verdict, encouraging protesters to “get more confrontational” if Chauvin is acquitted. President Joe Biden said he is “praying that the verdict is the right verdict.”