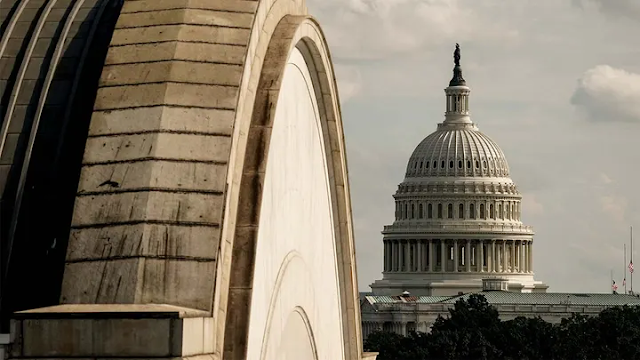 A view of the U.S. Capitol as senators vote to proceed to the Inflation Reduction Act in Washington, D.C. (Reuters/Ken Cedeno)

Republicans on Sunday heaped scorn on Democrats for passing a multibillion-dollar economic package, warning that it would come back to haunt them in the November midterms.

"Democrats will pay the price in November for raising taxes on families during a recession," Republican National Committee (RNC) Chairwoman Ronna McDaniel said in a statement.

Her statement reflects criticism among Republicans that the Inflation Reduction Act will do the opposite of its intended purpose.

In a statement, Sen. Ted Cruz, R-Texas, likened the bill to a "give-away to the Democrats’ radical leftist base at the expense of middle-class Americans."

"The Schumer-Manchin bill will drive up inflation and prices, hammer small businesses and American manufacturing, increase the price of gas, and sic the IRS on Americans, all while raising taxes on Americans in nearly every tax bracket including those who make less than $400,000 a year," Cruz said in a statement.

Sen. John Kennedy, R-La., called raising taxes during both a recession and inflation "a special kind of stupid."

"[T]hat’s called stagflation, which is what we have right now as a result of President Biden’s policies," Kennedy tweeted.

Sen. Marsha Blackburn, R-Tenn., likewise admonished Democrats for passing a bill during a recession and when inflation is at a 41-year-high.

"We should be cutting taxes, not increasing them," Blackburn said in a Twitter thread. "It is a shame the Senate Democrats have forced through a socialist agenda that will make life more difficult and expensive for Tennesseans."

During a recession and with inflation at a 41-year high, Democrats just passed a bill to spend over $700 billion, increase taxes and decrease energy production.

The Democrats’ reckless tax and spending plan includes nearly $370 billion to fund the Green New Deal, $64 billion for Obamacare, and hundreds of billions in new taxes on American businesses and manufacturers.

The spending spree also includes $80 billion to double the number of IRS agents — practically giving every American a personalized tax auditor. We should be cutting taxes, not increasing them.

"Democrats’ policies have torn down the savings, the stability, and the lifestyles that families worked and sacrificed for years to build up," McConnell said in a statement. "The effect of this one-party government has been an economic assault on the American middle class."

Senate Democrats passed the $740 billion package, 51-50, with Vice President Kamala Harris casting the tiebreaking vote after an all-night session. The House seems on track to provide final congressional approval when it returns briefly from summer recess on Friday. 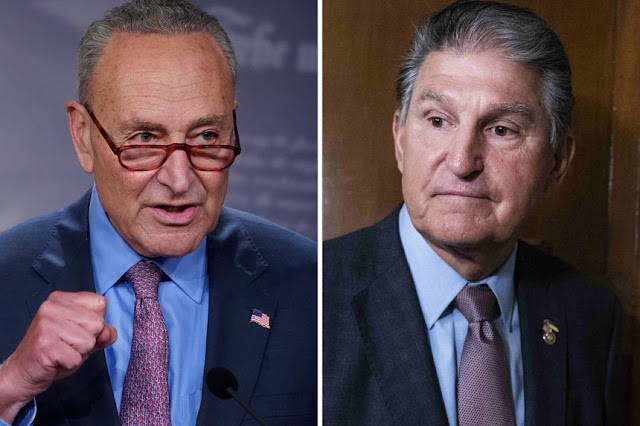 In 1982, after signing the biggest tax cut in our nation’s history, Ronald Reagan was approached by the Democrats in Congress with a deal; if he agreed to raise taxes, the Democrats would agree to cut three dollars of spending for every dollar of new revenue the tax increases produced. Reagan, wanting to be fiscally responsible and reduce the deficit, agreed to the tax increases. The bill was signed into law, taxes were raised, but the Democrats never followed through on their spending cuts, and in fact, increased spending and the national debt.

8 years later, in 1990, after President George HW Bush made his infamous campaign promise of “read my lips, no new taxes”, the Democrats offered him a similar deal; if he agreed to raise taxes, they would cut two dollars of spending for every dollar of new revenue the tax increases produced. Bush, like Reagan, wanting to be fiscally responsible, went against his campaign promise and agreed to raise taxes. The bill was signed into law, taxes were increased, but the Democrats never cut spending, they increased it. And the Democrats used the tax increase Bush signed into law against him in the 1992 Presidential campaign. The Democrats will promise almost anything to get the bills passed that they want, but they rarely follow through on their promises.

On Tuesday, Senator Joe Manchin, who had been one of the only two Democrats in the Senate who stood up against the Congressional Democrats reckless spending over the last year and half, agreed to a side deal with Senate Majority Leader Chuck Schumer which cleared the way for the passing of the Democrats $739 billion spending plan – the so-called “Inflation Reduction Act”. Manchin said that he “secured a commitment” from Joe Biden, Chuck Schumer and Nancy Pelosi that they would allow completion of the $66 billion Mountain Valley Pipeline carrying West Virginian natural gas to Virginia, in exchange for his vote.

So, it turns out that Joe Manchin was not the champion of fiscal responsibility that he purported himself to be when he refused to vote for previous Democrat reckless spending packages like Build Back Better; he was not one of those rare politicians who put the country ahead of party and ahead of himself. No, he was simply holding out for the biggest grift he could get. The question now is, how soon after Joe Biden signs this “Inflation Reduction Act” into law will Chuck Schumer, Nancy Pelosi, and the rest of the Democrats block the completion of the Mountain Valley pipeline that Joe Manchin traded his vote for? That pipeline will never be completed. The people who championed a bill that has been described as "the biggest climate action in human history" will never allow a gas pipeline to be completed. Never. You cannot cut deals with Democrats just as you can’t cut deals with the devil. They never live up to their end of the bargain.

Never listen to a word they say when they talk about looking out for the American people and families, or any such nonsense. The only families that this spending bill will help are the families of the people who voted for the bill, and their donors. This bill helps nobody else. The biggest economic problem that the average American family is facing right now is inflation, and the inflation we are experiencing has been driven primarily by two things; Joe Biden’s attack on the fossil fuel industry which has driven oil and gas prices through the roof, and consequently the price of consumer goods; and the Democrats reckless spending which has forced the Fed to print trillions of dollars out of thin air which has devalued our dollar and inflated the price of everything.

This so-called “Inflation Reduction Act” actually increases inflation because it does the two things that created the inflation we are experiencing in the first place; it attacks the fossil fuel industry and creates $433 billion of new reckless spending. And it also raises taxes on corporations which causes inflation because when the cost of doing business increases on corporations and businesses the price of their products increases. So, the government – the Democrats – are taking in more tax dollars to spend on their grift, and who ends up footing the bill? The average Americans through the higher inflation that their tax increases caused.

And surprise, the 15% corporate minimum tax that Chuck Schumer and Joe Manchin have been bragging about will not touch many of their billionaire donors. Built into the bill as always is protection for some of the Democrats biggest donors like Amazon who will be able to use tax credits offset the increase of corporate taxes. Last year, Amazon used tax credits to reduce its tax liability by $1.1 billion, and the Schumer-Manchin bill does nothing to eliminate Amazon’s ability to do that.

So, who will end up paying most of the new taxes in this bill? As always, average Americans. The people who cannot afford to buy politicians will end up footing the bill for these politicians reckless and corrupt spending. According to the Congressional Joint Committee on Taxation, by the year 2023, American taxpayers making less than $200,000 will pay an additional $16.7 billion in taxes, and by 2031, people earning less than $400,000 will pay as much as two-thirds of the additional tax revenue collected that year.

The “Inflation Reduction Act” is littered with green energy spending. There is $370 billion for investments in clean energy, clean transportation, energy storage, farming, home electrification, and clean tech. The green movement is the biggest grift of all. It is strictly about paying off political donors who have invested millions of dollars into green energy. If they are so concerned about carbon emissions, why do the environmentalist continually push to shut down nuclear power plants and tear down hydro-electric dams which produce efficient, inexpensive, carbon-free energy. You would think they would embrace those forms of electricity, yet they don’t.

Currently, there is a push to remove four dams over the Klamath river, which flows from Oregon to northern California and produces enough energy to power 70,000 homes. Environmentalists want the dams removed because they prevent salmon from reaching spawning grounds farther upstream. Hydroelectric power is clean, inexpensive, carbon-free energy, yet the environmentalists want to remove these dams and force us to fill that energy-void with renewable energy that Democrat donors are heavily invested in. They do not care about the five hundred and seventy-three thousand birds that are ripped to shreds in the blades of windmills each year because it’s OK to kill birds in wind turbines but it’s not OK to kill salmon in damns because the Democratic donors don’t have a financial stake in the dams like they do in the wind turbines. That is the same reason why everything the Democrats are doing is driving us to wind and solar power no matter how inefficient the power is and how destructive it is to our economy.

All these Senators and Representatives, sitting in the hallowed halls of Congress with so much of America’s great history surrounding them, working in a building filled with classical, awe-inspiring architecture, are besmirching the office that they hold, and the body that they serve with everything that they do. Deals like the “Inflation Reduction Act” desecrate the Capital so much more than anything the rioters on January 6, 2021, did. To call a bill that is clearly going to create more inflation, the “Inflation Reduction Act” completely disrespects the office they hold, and more importantly, it completely insults the people they serve. It is a slap in the face to every American. The United States government has become one of the biggest grift ever perpetrated on any country in the history of the world, and there is not much we can do to stop it because we don’t have the money to buy the power to de-corrupt American politics.