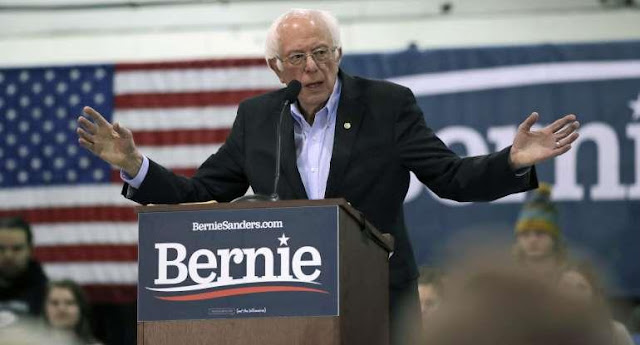 The Democrats got through Round 2 of their 2020 primary slog with far less drama than they dealt with in Round 1. All was wrapped up in a timely fashion, the only embarrassment this time being the fact that an elderly white male commie was firmly cemented as their frontrunner.

OK, maybe not firmly cemented, but at least Poligripped.

For the moment anyway.

Bernie Sanders won the New Hampshire Democratic primary, edging out Plucky Mayor Pete and the Queen of Mean Amy Klobuchar, who established herself as a legit contender with a third place finish.

The combined totals of previous top-tier dwellers Crazy Joe the Wonder Veep and Fauxcahontas were less than Klobuchar’s, if you were wondering just how quickly weird this race is getting.

The rapid fade of Biden and Warren is a bigger story than Bernie’s win. Sanders won New Hampshire in 2016 by 22 points, after all.

The vultures are clearly circling Biden’s campaign. It’s not just that he didn’t win either of the first two contests, it’s that he was nowhere to be found in either. For a guy whose entire sales pitch was “electability,” not being the slightest bit competitive in Iowa or New Hampshire is a real knee-capper.

It’s difficult to understand why people with access to Google would insist that Biden was the man for the general election job, given how thoroughly awful his track record in presidential primaries is.

He has yet to win a single primary or caucus.

Cillizza and CNN were on the Biden train until recently, by the way. Perhaps they just got the internet and Google.

So what, dear Morning Briefing faithful, does all of this mean?

First, this race is volatile and there is a lot that could still happen.

Except for Joe Biden winning it, of course.

I say that, but Biden winning South Carolina would be a dream for Republicans. The Democrats would be thrown into real disarray, forced to choose between Bernie’s socialist vision, and Biden’s insistent reminders that he used to hang out with Barack Obama.

One thing is certain: Elizabeth Warren will soon be flipping through Hillary Clinton’s Book of Blame for excuses to explain away her myriad weaknesses as a candidate. Sexism will of course be Number 1 on the list, sure to be followed by “Something, something Trump,” and the inherent patriarchal oppression spread through Tom and Jerry cartoons.

If you are a political junkie, this race just became very entertaining theater. If you like theater where all the players are drunk and repeating the same four lines that is.

RNC Chairman Ronna McDaniel gave the Republican Response to NH in a tweet:

For the moment, it’s all fun and games.

Until they nominate the commie.

After their mess in Iowa last week and their struggle to coalesce behind one candidate in New Hampshire, the Democrat Party remains in complete disarray.

One thing that is clear: Bernie winning his second state in a row shows how Socialism is now the mainstream in today’s Democrat Party.

https://pjmedia.com/news-and-politics/the-morning-briefing-new-hampshire-berns-down/?utm_source=mbriefnl&utm_medium=email
Posted by Frances Rice at 7:44 AM