Trump’s Bid for the Black Vote

By The Editorial Board |The Wall Street Journal 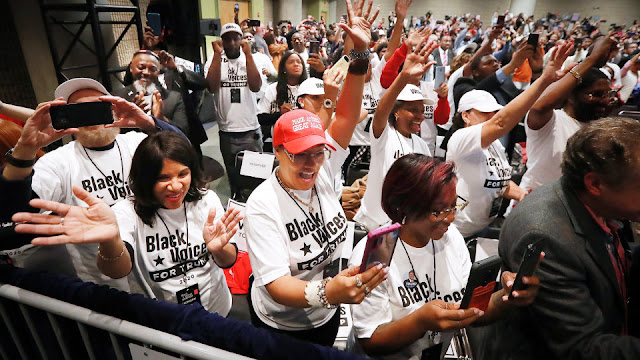 African-Americans were front-and-center at the State of the Union. Image: Curtis Compton/Zuma Press

The media have focused on the Nancy Pelosi-Donald Trump feud on display at Tuesday’s State of the Union address. But for our money the most notable part of the evening, and perhaps the most politically consequential, was President Trump’s pitch for African-American support.

Progressives cast all Republican politicians as avatars of racial resentment, and Mr. Trump has sometimes made himself an easy target. He once trafficked in birther conspiracies about Barack Obama, and he botched the response to the Charlottesville white-supremacist march in 2017. Joe Biden dines out on this campaign theme in every speech.

Yet Mr. Trump is working hard to defy this Democratic narrative, and good for him. The Trump campaign spent half of its $10 million Super Bowl ad-buy highlighting Mr. Trump’s commutation of a black woman’s life sentence for a drug offense. Then on Tuesday African Americans were front-and-center.

Some of Mr. Trump’s appeals were symbolic, such as recognizing 100-year-old Charles McGee, who served in the all-black Tuskegee Army Air Force unit in World War II, and his great-grandson, who wants to be an astronaut. He mentioned Frederick Douglass, Harriet Tubman, and Martin Luther King Jr. in his appeal to American greatness.

Beyond the inclusive tone, Mr. Trump emphasized policies that address real inequities in American life. Perhaps the most compelling was Mr. Trump’s extended brief for school choice. The quality of many urban government schools is a national disgrace, and African-American children suffer most.

Mr. Trump highlighted a black youngster whose “future was put further out of reach when Pennsylvania’s Governor vetoed legislation to expand school choice,” and he called for Congress to expand opportunities for scholarships to attend alternative schools.

This has become a sharp dividing line between the two parties, as Democrats have abandoned choice under pressure from unions. In 2018 Florida Gov. Ron DeSantis won a close race thanks to the votes of African-American women who supported him out of proportion to other GOP candidates. One likely cause was his school-choice platform. Mr. Trump should campaign around the country highlighting charter, private and parochial schools that help children of all races escape rotten union schools.

Mr. Trump also highlighted sentencing reform, which he signed into law over the objections of some on the right. The extent that black voters want to soften the criminal-justice system is sometimes exaggerated—they are often the victims of violent crime—yet nonviolent offenders are sometimes sentenced for longer than society requires to remain safe. Mr. Trump’s willingness to buck political convention on this issue is making a difference for young black men especially.

Then there are the “opportunity zone” tax incentives championed by GOP Senator Tim Scott aimed at funneling investment into low-income areas. Mr. Trump recognized a black man, Tony Rankins, who had turned his life around after prison and is a tradesman in an opportunity zone. We’re more skeptical of the overall economic impact of this tax incentive, but the late Jack Kemp would have approved of this attempt to bring capital to places where there hasn’t been enough.

***
Mr. Trump won about 8% of the black vote in 2016, and Beltway sages (including some conservatives who fancy themselves experts) sneer that he won’t do any better in 2020. But policy results matter, especially when they are accompanied by sincere and persistent outreach. In any case more two-party competition for black voters is good for the country.

Partisan identities are sticky, and perhaps Mr. Trump’s efforts won’t overcome the Democratic and media’s political stereotyping by race. But the GOP needs to try, and Mr. Trump deserves credit for doing so.