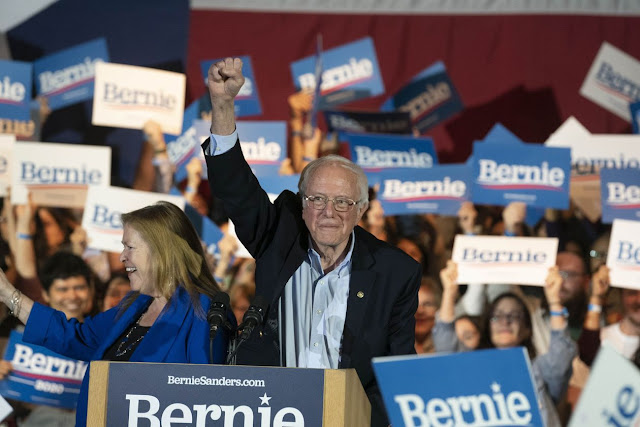 Bernie’s rout in Nevada makes him the favorite for the nomination.

Democrats now know how millions of Republicans felt in 2016. A populist with devoted plurality support charges through the primary and caucus states, racking up delegates against multiple “establishment” candidates who all want to be the last alternative standing. Before the media knew it, Donald Trump could not be stopped.

With his overwhelming victory in Nevada’s caucuses on Saturday, Bernie Sanders is on the road to pulling off a similar coup against the Democratic Party. The Vermont socialist performed even better than his polling and was leading with 46% of the vote with 60% of the precincts reporting Sunday morning.

He did well with most voter groups, but especially the young and Latinos. Many of his supporters may not know what socialism means in practice, but they like his angry demands for social justice and for government to fix all of America’s inequities.

As important, his competitors continued to divide the vote with no single candidate breaking out as a dominant challenger. Joe Biden was second with 19.6%, giving him a talking point going into next Saturday’s make-or-break primary in South Carolina. Pete Buttigieg was third with 15.3%—close to the 15% state-wide threshold to gain delegates.

The result was especially painful for Amy Klobuchar, who couldn’t build on her strong showing in New Hampshire. She was in fifth with 4.8%. Elizabeth Warren vows to fight on but she didn’t turn her savaging of Michael Bloomberg in last week’s debate into enough support and was fourth at 10.1%
Mr. Sanders will now go into the Palmetto State against the same divided field.

All of the candidates except for Messrs. Sanders and Bloomberg (and the fading billionaire Tom Steyer ) lack the money to compete with more than token TV ads in the Super Tuesday states that follow three days after South Carolina. Mr. Bloomberg won’t be on the ballot until Super Tuesday.

The Democratic Party has put itself in this position by front-loading so many primaries and creating a proportional allocation system for delegates. Anyone who gets 15% of the vote in a state gets some delegates, which plays into the hands of a candidate like Mr. Sanders who has solid support on the left. No Democrat can now do what Ronald Reagan did in 1976 by winning a primary in late March in North Carolina and surging to win all the delegates in many later states and nearly take the nomination from President Gerald Ford.

All of which makes Mr. Sanders the clear favorite for the Democratic nomination even after a mere three contests. He might still be stoppable if someone can beat him in South Carolina and reduce his margins in the 14 Super Tuesday states. There is much pundit talk about a contested July convention in Milwaukee. But that is less likely than the chatter says unless Mr. Sanders is held to a narrow plurality of delegates. Even then Mr. Sanders will claim he deserves the nomination and that insider elites want to steal it.

The other candidates have contributed to this predicament by failing to challenge Mr. Sanders and his socialist agenda. They dispute his Medicare for All math, and his electability in November, but ever so gently. They all offer some version of Bernie Lite, and none speak up for the private economy.

Mr. Bloomberg made a halting stab at it in last week’s debate but the other candidates devoted their time to bludgeoning the businessman for his ancient sins against identity politics. Mr. Sanders got a pass, as he has the entire primary season. Mr. Buttigieg finally put the boot and some edge against Mr. Sanders into his remarks on Saturday night in Nevada, but the question is whether it’s too late.

Democrats are waking to the prospect of a nominee who wants to eliminate private health insurance, raise taxes on the middle class, ban fracking and put government in charge of energy production, make college a taxpayer entitlement, offer free health care to illegal immigrants, raise spending by $50 trillion, and tag every down-ballot Democrat with the socialist label.

All of these are political vulnerabilities, but Republicans shouldn’t be too sanguine that Mr. Sanders would be an easy November mark. A majority of Americans aren’t socialist, at least not yet, but the country is closely divided politically. Democrats and the media will close ranks behind Mr. Sanders as an alternative to the incumbent.

Mr. Trump might also make the election a referendum on himself—meaning his personal behavior and character—rather than the socialist agenda. That’s an election Bernie Sanders could win. Democrats have little time left if they want to offer the country a better choice.