Trump's Post-Acquittal Presser Did Not Disappoint 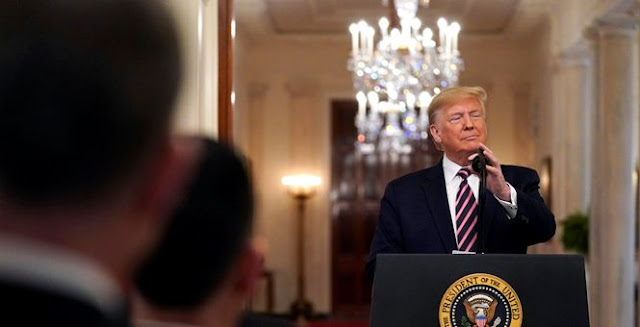 President Trump proudly waved a handful of newspapers declaring, "Acquittal" at the National Prayer Breakfast on Thursday, before tearing into the Democrats (and Mitt Romney) for being on the losing side. He used the word "corrupt" and blasted the self righteousness of House Speaker Nancy Pelosi for claiming she "prays" for him, while simultaneously leading the effort for his removal. She was sitting just a few feet away from him as he delivered those fiery remarks.

A few hours later Trump delivered his much hyped post-acquittal press conference at the White House. He walked up to the podium accompanied by an extended standing ovation.

Another round of applause was saved for Trump's impeachment defense team and Senate Majority Leader Mitch McConnell.

"We've all been through a lot together," Trump said.

He called the campaign launched by Democrats the past few months (and the past few years), as a "witch hunt" and "a disgrace." He suspected that a weaker president would not have survived the impeachment. Trump pinpointed his victory to one key decision he made a few years ago.

"Had I not fired James Comey, who was a disaster by the way, it's possible I wouldn't be standing here right now," Trump said. "We caught him in the act."

He later added that Comey is a "sleazebag" and part of a larger campaign of "bad cops" who were trying to remove him from office.

Today, though, Trump said, is a "celebration."

He then flashed a copy of The Washington Post that read, "Trump Acquitted."

"I'll take that home, maybe I'll frame it," he joked, adding that it was probably the "best headline" the WaPo has ever granted him.

The president again took a swipe at Sen. Mitt Romney (R-UT) for being the sole Republican to vote to convict him on the first article of impeachment, abuse of power. The senator, who Trump preferred to call a "failed presidential candidate," used "religion as a crutch" to justify his vote against the president.