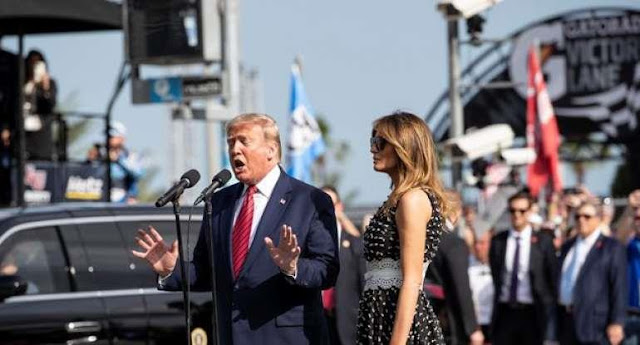 The Power of the Incumbency Compels You

President Trump is certainly enjoying all of the inherent advantages of incumbency as he campaigns for re-election.

While the Democrats are flailing and trying to figure out how to count votes or not nominate a communist, the president is using that nice big plane of his, flying all over the country and trolling the poor dears. 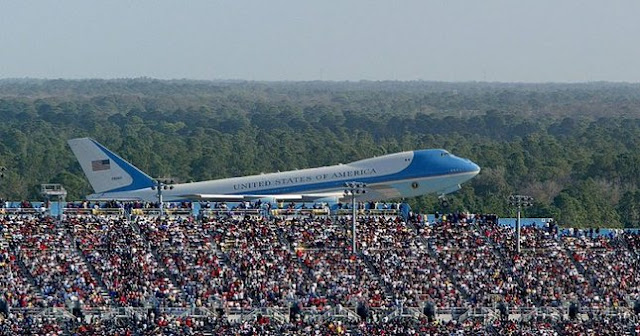 On Sunday, Trump swept out of the sky over the Daytona 500, electrifying the huge crowd while buzzing it in Air Force One before pacing the field in his presidential limo nicknamed “The Beast.” Megan wrote all about it and the reaction (the positive stuff, anyway) yesterday.

This is Trump in his element: the center of attention of a massive audience, big production value...all the trappings of the biggest bully pulpit in the land.

The complaints that many Republicans still have about Trump -- which I find to be beyond tedious at this point -- are the very things that will most likely propel him to victory in November.

His reality television instincts for selling the brand are unparalleled, and he is bringing all of his salesmanship skills to this fight.

His relaxed demeanor -- he’s clearly in his element right now -- stands in stark contrast to the flailing you-know-what show going on with the Democrats these days. A November election isn’t won in February, obviously, but there is a lot to be said for a solid, spectacular launch, which Trump is pulling off.

Sunday’s display in Daytona no doubt struck fear into the hearts of the Democrats. While Florida may not technically be “flyover country,” the term is really used to apply to all of the right-leaning voters who don’t live in the coastal media bubbles.

The symbolism of the president of the United States literally flying over an appreciative flyover country crowd was positively brilliant. The Daytona 500 is always exciting, but the announcers were commenting on it being unusually so this year before the race because of the president’s arrival:

The size and enthusiasm of the crowd’s Trump has seen this year have been something to behold. 2016 was an historic election in that it showed that the once-almost unbeatable power of the mainstream media was weakening.

Now, we’re seeing that the relentless drumbeat of negativity in the press regarding the president has had almost no effect once one gets away from the effete kombucha-swilling freakshows on either coast.

The Democrats would like to forget that the people who were so excited to see the president on Sunday exist. They certainly aren’t crafting any sort of message to appeal to them. The president is using everything at his disposal to shine a light on that fact.

It’s kind of fun to watch. 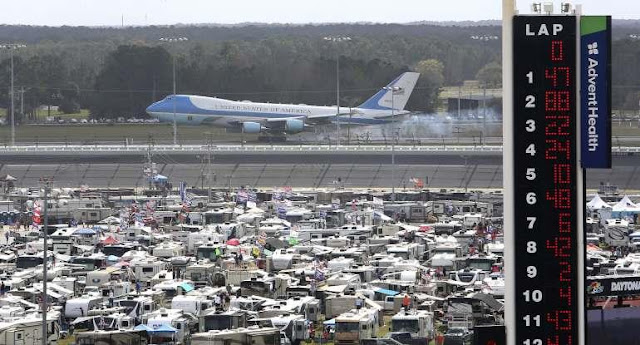 NASCAR fans got the show of the century on Sunday at the Daytona 500 when the grand marshal of the event, President Donald J. Trump, made his entrance by buzzing the Daytona International Speedway in Air Force One—only 800 feet off the racetrack. Announcers called it "one of the most incredible things" ever seen.

There were rumors all week that the president would also take a lap in The Beast before the race. Shortly after the AF1 flyover, he did just that.
But he didn't just want to drive around the track—the president paced the field ahead of the competitors too.

Driver Clint Bowyer was recorded when he found out the president was going to pace the field, exclaiming happily, "Love it! God, it's awesome!"

But the president wasn't done. As he was exiting the track he asked for access to the radio so he could deliver a special message to the drivers.

When Trump and the first lady arrived, they were greeted by the roar of the crowd and chants of "FOUR MORE YEARS."

Trump also is the first president to deliver the famous opening phrase, "Gentlemen, start your engines!"

Earlier, the president delivered a short speech that was well-received by the crowd. "There is no greater thrill than to join you at the world's center of racing for the 62nd Daytona 500. So exciting!" said Trump. "The tens of thousands of patriots here today have come for the fastest cars in the world-class motorsports, but NASCAR fans never forget that no matter who wins the race what matters most is God, family, and country." Trump recognized the Gold Star Families attending the event and honored all fallen warriors during the speech. Trump went on to laud NASCAR competitors for racing in pursuit of "American glory."

And Trump would not be Trump without having some fun with reporters. He tells this one he's going to steal a car and get in the race if he can.

America's most popular sport just had an epic day!