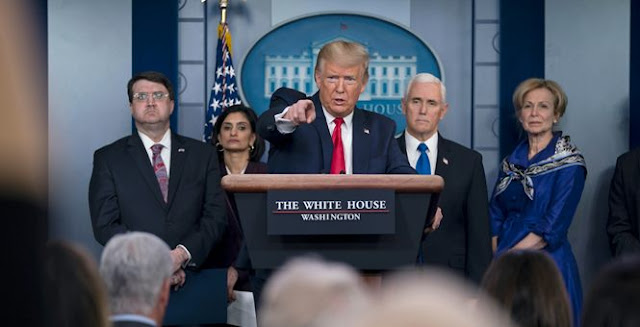 The majority of Americans now approve of President Trump's handling of the Wuhan Coronavirus pandemic, according to a new poll conducted by ABC News/Ipsos.

The poll shows a significant increase in approval for the president with a 12-point uptick from the same round of questions given by the pollster just a week before. Americans surveyed for the poll also reflected a dramatic change in the way they are looking at the virus pandemic, showing that nearly three-quarters of those surveyed feel that the Wuhan Coronavirus has changed their life.

The poll was conducted on Wednesday and Thursday of this week, days that saw the most dramatic increase in confirmed cases of the COVID-19 virus. The polling also coincided with Trump signing the most comprehensive relief package related to the pandemic to date, including guaranteed free testing, paid sick leave, enhances to unemployment relief, and paid emergency leave.

That bill, the second "phase" of legislation designed to relieve hardships suddenly beset on much of America because of isolation and loss of work, sailed through both chambers of Congress with unprecedented bipartisan support. A third phase of financial stimulus is in the works, a measure Senate Majority Leader Mitch McConnell says will be settled and voted on before lawmakers adjourn. The Kentucky Republican noted, however, social distancing and other protocols would be observed.

"What we'll do is have a 30-minute roll call vote. We want to avoid congregating here in the well," McConnell said. "I would encourage our colleagues to come in and vote and depart the chamber so we don't have gaggles of conversation here on the floor. That's particularly important for our staff here and the front of the chamber, so I would encourage everyone to take full advantage of a full 30-minute roll call vote. Come in and vote, and leave."

The actions by the president and congressional members of both parties have seemingly comforted Americans rattled by the economic free fall and threat of illness looming over the entire country, according to the poll. Notably, the partisan split in approval showed a sharp increase in Democrats with faith in the president with doubled numbers from only 15 percent to 30 percent.

Democrats who disapprove of the president decreased from 86 percent to just 69 percent. Meanwhile, the GOP overwhelmingly supports Trump with 92 percent of respondents praising his response to the pandemic.

Trump has largely settled into a rhythm as the crisis continues, giving daily briefings from the White House with the Coronavirus Task Force. The briefings give the president the opportunity to address the nation and provide his typically optimistic outlook for the future of the nation while yielding much of his time to a panel of experts. Drs. Anthony Fauci and Deborah Birx, as well as Surgeon General Jerome Adams and even Vice President Pence have proven to be a reasonable balance to Trump during the briefings.

The ABC/Ipsos poll echoes similar results published by Harris that showed 56 percent of Americans supported the president's efforts during the current crisis. During this time, the president also received shocking praise from one of his primary congressional detractors, Rep. Ilhan Omar of Minnesota, and CNN anchor Dana Bash.

"Politics aside, this is incredible and the right response in this critical time," Omar said in a Wednesday tweet.