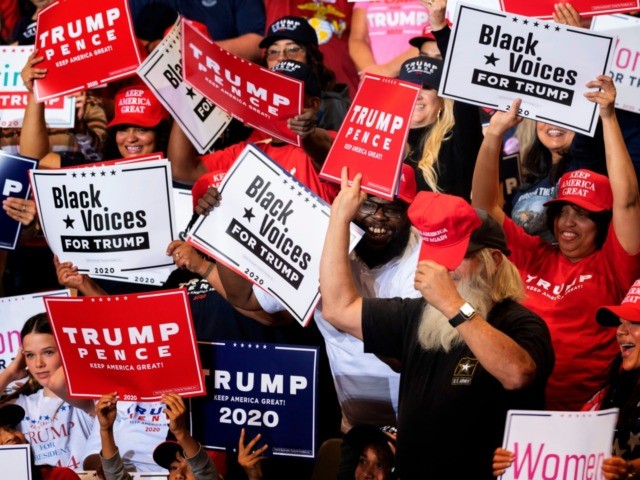 A poll of registered black voters shows support for President Trump has increased  by 50 percent, and a large number are unhappy with the Democrat Party.

The far-left Politico does its best to play down how potentially important this result is, but as former White House Press Secretary Ari Fleischer perfectly put it: “[T]he real headline should have been: ‘Trump Triples McCain Vote and Doubles Romney Vote Among Black Voters.'”

An important piece of context, though, is that both McCain and Romney were running against Barack Obama, the first black president.

Regardless, according to this BlackPAC poll, Trump’s support among registered black voters has jumped 50 percent since 2016, or from eight to 12 percent. This is exactly what Sen. Tim Scott (R-SC) predicted just last week.

Is 12 percent enough to bottom out the Democrat Party as a national party?  No. As reliant as Democrats are on the black vote, that number would have to climb closer to 25 percent before the U.S.S. Jackass started lowering the lifeboats. But…

This poll of 804 black registered voters (with a three point margin of error) does show a large reservoir of dissatisfaction.

A full one-third wish Democrats had “someone else” running for president, and only 70 percent say they will vote for whoever wins the Democrat nomination.

Granted, 70 percent is a whole lot, but if 30 percent, or even 20 percent stay home or pull the lever for Trump, that’s a catastrophe for Democrats.

“Still, the president and Republican Party as a whole remain very unpopular with black voters, as 76 percent of them disapprove of the president‘s performance and nearly 80 percent support his removal from office,” reports Politico.

Fair enough, but if only 76 percent disapprove of Trump, that means 24 percent are persuadable, and if Trump wins 15 to 20 percent of the black vote and a large number stay home because they are unhappy with the Democrat nominee, in the immortal words of Bill Paxton, it’s Game over, man!

Hillary Clinton was definitely damaged by a lack of enthusiasm among black voters. In 2016, she earned just 88 percent support from blacks, compared to the 93 percent Obama won in 2012.

This poll, and a recent poll of Hispanics, again proves just how impotent the establishment media are now.

For four years, the fake news media have spent billions of corporate dollars to smear Trump as a racist. It’s obviously not working.

What is working, though, is Trump’s legitimate and sincere outreach to the black community. Unlike Obama, he was able to get criminal justice reform passed, and his economic reforms are making a real difference in black America, including record-low unemployment and a real increase in wages — the first in a decade.

Trump is also — and I cannot overstate how important this is — going out and asking black voters for their support, for their vote. Unlike establishment Republicans like McCain and Romney, who wrote off this community or were intimidated by the news cycles that called them “racist” whenever they  tried to reach out, Trump has been leaning into this community, even as the fake news media shoot flaming arrows into his back.

The flaming arrows are the media’s way of trying to bully Trump, to scare him off, to make asking for the black vote not worth the political price. But this isn’t working because Trump is fearless. He also understands that issues like school choice, enterprise zones, criminal justice reform, jobs, and fighting against the illegal immigration that either robs jobs from black people or depresses their wages, is a winning message.

I also wonder, and this is just speculation on my part; there’s no data to back this up, no polling… But I wonder if the 24/7 jihad launched against Trump by the establishment — the media, the Deep State — has not earned him some sympathy from a group of voters who believe (and not always without cause) that this same establishment also seeks to oppress them.

https://www.breitbart.com/politics/2020/02/25/nolte-poll-shows-trump-eating-into-democrat-black-vote/
Posted by Frances Rice at 9:32 AM