McConnell's coronavirus stimulus plan would provide payments of $1,200 per person, $2,400 for couples 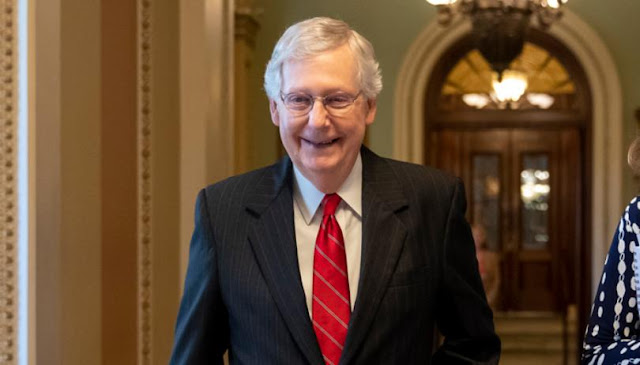 Sen. McConnell on coronavirus bill: The Senate is not going to leave small business behind

Saying lawmakers "need to take bold and swift action as soon as possible," Senate Majority Leader Mitch McConnell on Thursday introduced legislation to provide as much as $1,200 per person and $2,400 per couple in the U.S. amid the coronavirus outbreak and skyrocketing jobless claims.

The draft legislation, obtained by Fox News, would provide minimum payments of $600, and aid would be phased down at income thresholds of $75,000 for individuals and $150,000 per couple. Additionally, there would be $500 payments for each child.

The rebate amount is slated to be reduced by $5 for each $100 a taxpayer’s income exceeds the legislation's threshold. The amount is therefore reduced to zero for single taxpayers with incomes exceeding $99,000 and $198,000 for joint filers. The IRS will determine income based on taxpayers' 2018 tax returns.

The legislation additionally contains numerous business-related provisions geared at helping small businesses, including a delay of payment for employer payroll taxes, a delay of estimated tax payments for corporations, and modifications for net operating losses. 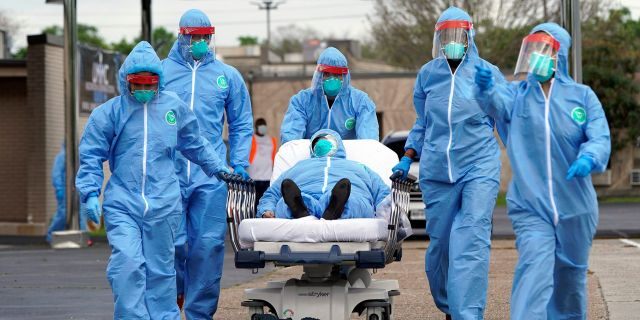 A person is taken on a stretcher into the United Memorial Medical Center after going through testing for COVID-19 Thursday, March 19, 2020, in Houston. People were lined up in their cars in a line that stretched over two miles to be tested in the drive-thru testing for coronavirus. (AP Photo/David J. Phillip)

McConnell's plan would provide $208 billion in loans and loan guarantees to distressed sectors of the economy, including $50 billion for commercial airlines and $8 billion for air cargo carriers, and $150 billion for other eligible businesses, but those loans would have to be paid back.

It's an opening salvo in fast-track talks with Democrats as President Trump urges Congress to “go big” to respond as Americans reel from the crisis.

"These are urgent discussions and they need to happen at the member level," McConnell said, noting the White House will send key personnel to talk about the bill as they try to forge a compromise.

Fox News is told McConnell did not yet have the votes on his side, and had two Republicans self-quarantined.

Speaking after McConnell, Senate Minority Leader Chuck Schumer, D-N.Y., complained that Republicans had sought "no input" from Democrats, and asserted that no Democrats had even seen the bill.

He added he was told "there is a bailout for industries" in the measure.

Democrats have their own proposals for ushering aid to Americans, and even some of McConnell's GOP senators have said they preferred instead to use the federal dollars to keep workers who are asked to stay home on the business payrolls.

“What I want is income, not one check,” said Sen. Lindsey Graham, R-S.C., summing up the views of some exiting a long, private meeting of GOP senators on Capitol Hill. One or two checks “makes no sense to me,” he said.

Treasury Secretary Steven Mnuchin on Thursday morning told Fox Business Network that the White House was looking at payments of $1,000 to most adult Americans within three weeks, as a way to stem the widespread economic damage caused by shuttered businesses and social distancing.

Mnuchin also said that if the crisis were still ongoing in six weeks, the federal government would deliver another round of checks worth the same amount of money.

The Treasury secretary said Thursday the checks would be direct-deposited into people’s accounts.

The legislation provides 14 days of paid sick days to workers affected by the coronavirus, ensures free testing to everyone, including the uninsured, and expands food aid and boosts unemployment dollars to states.

The House and Senate already passed a bipartisan $8.3 billion package to prop up the health care system to prepare for the influx of sick Americans. The second response bill that was signed into law Wednesday aims to bring relief to workers who lost their jobs and families at home for illnesses, quarantines or caring for kids whose schools have shuttered.

This is a developing story. Check back soon for updates.
Fox News' Chad Pergram, Brooke Singman, Mike Emanuel, and The Associated Press contributed to this report.