BY DAVID SMILEY | The Miami Herald 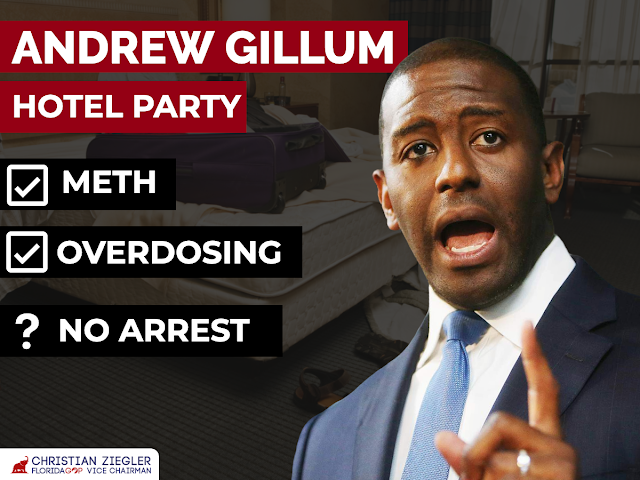 Andrew Gillum, who in 2018 came within 34,000 votes of becoming Florida’s governor, was discovered by police at a South Beach hotel early Friday morning in a room with bags of possible methamphetamine and in the company of a man who appeared to have overdosed on drugs, according to a Miami Beach police report.

Police say they were called to the Mondrian South Beach early Friday morning and found paramedics treating Travis Dyson, a 30-year-old Miami man, for an apparent heart attack. They say two other men were in the room: Aldo Mejias and Gillum.

Police say Gillum, who was not arrested, was too intoxicated to answer questions. An offense incident report says that officers found three clear plastic baggies of suspected crystal meth on the bed and floor.

Gillum, a former Tallahassee mayor, issued a statement Friday afternoon in which he denied using drugs.

“I was in Miami last night for a wedding celebration when first responders were called to assist one of my friends. While I had too much to drink, I want to be clear that I have never used methamphetamines,” he said. “I apologize to the people of Florida for the distraction this has caused our movement.”

According to police, Mejias told officers that he gave his credit card information to Dyson to rent the room Friday and planned to meet him later in the day. When he went to the room shortly before midnight, Mejias said he found Dyson and Gillum “under the influence of an unknown substance.”

Mejias, 56, said Dyson opened the door to room 1107 to let him in and then collapsed on the bed. He said Dyson was having trouble breathing, so he woke him up. Dyson then vomited and collapsed again, so Mejias said he performed chest compressions on Dyson and then called paramedics.

Mejias told police he saw Gillum, 40, vomit in the bathroom.

Attempts to reach Mejias by phone Friday were not immediately successful.

Police say Dyson was taken to Mount Sinai in stable condition. They returned to check on Gillum, who was not arrested and was allowed to return home “without incident.”

Gillum thanked Miami Beach paramedics in his statement and said he’ll “spend the next few weeks with my family and appreciate privacy during this time.”