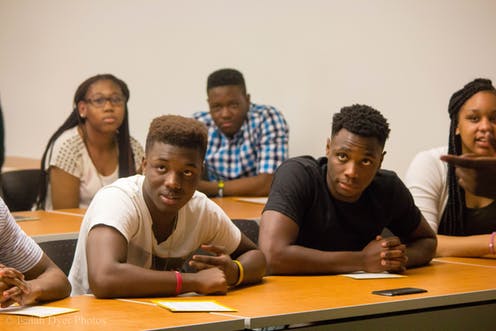 A recent report by Chris Stewart has shed new light on some of the educational problems faced by black youth. The report is titled "The Secret Shame: How America's Most Progressive Cities Betray Their Commitment to Educational Opportunity for All." Stewart is a self-described liberal and CEO of Brightbeam, a nonprofit network of education activists who want to hold progressive political leaders accountable.

The report asks, "So how do we explain outstandingly poor educational results for minority children in San Francisco -- which also happens to be one of the wealthiest cities in the country?" "The Secret Shame" reports that progressive cities, on average, have black/white achievement gaps in math and reading that are 15 and 13 percentage points higher than in conservative cities. For example, in San Francisco, 70% of white students are proficient in math; for black students it's 12% -- a 58-point gap. In Washington, D.C., 83% of white students scored proficient in reading compared to 23% of black students -- a 60-point gap.

Yet, three of the 12 conservative cities researchers looked at -- Virginia Beach, Anaheim and Fort Worth -- have effectively closed or even erased the gap in at least one of the academic categories studied, achieving a gap of zero or one. "The politically conservative Oklahoma City has even turned the tables on our typical thinking about race-based gaps," says Stewart. Black students in Oklahoma City even have higher high school graduation rates than white students.

Then there's gross fraud practiced by the education establishment. High school graduation rates for black students range from a high of 84% in Texas to a low of 57% in Nevada and Oregon. However, according to ACT data, the percentage of black students judged to be college-ready in English, math, reading and science ranges from 17% in Massachusetts to only 3% in Mississippi. One concrete example of this fraud is the fact that Baltimore's Frederick Douglass High School has a graduation rate of 70% while not a single student tested proficient in mathematics and only 3% did so in reading.

"The Secret Shame" report didn't say why the black/white achievement gap was smaller in conservative cities compared to their progressive counterparts. But permit me to make a suggestion. An Education Week article reported that in the 2015-16 school year, "5.8% of the nation's 3.8 million teachers were physically attacked by a student." The Justice Department's Bureau of Justice Statistics and the Department of Education's National Center for Education Statistics show that in the 2011-12 academic year, there were a record 209,800 primary- and secondary-school teachers who reported being physically attacked by a student. A National Center for Education Statistics study found that 18% of the nation's schools accounted for 75% of the reported incidents of violence, and 6.6% accounted for half of all reported incidents.

These are schools with predominantly black student populations. My guess is that part of the reasons black academic achievement is greater in conservative cities is that schools are less tolerant of crime whereas schools in progressive cities make excuses.