Bruce LeVell On Black Support For Biden: ‘They’re Caught Up In A Harsh Generational Curse’

By STEPHANIE HAMILL | The Daily Caller

Bruce LeVell, the executive director of the National Diversity Coalition for Trump, sat down the the Daily Caller’s Stephanie Hamill to discuss the South Carolina primary, black support for former Vice President Joe Biden and more.

“They’re caught up in a harsh generational curse,” said LeVell. “I think people have short memories when it comes to Joe Biden, this is the man that authorized the Clinton crime bill.”

LeVell went on to explain how President Donald Trump’s policies are benefiting minorities. 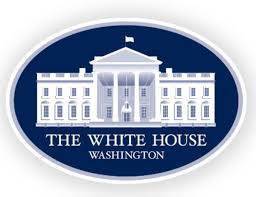 We’re fighting to give every American — all over the country, every single American — a future of dignity and purpose and of pride.
President Donald J. Trump
RECORD-BREAKING RESULTS: Under President Donald J. Trump, economic opportunity is soaring and unemployment is dropping for African Americans.
·         This year, African-American unemployment fell to a record low of 5.9 percent.
·         Total African-American employment has increased by 976,000 since President Trump’s election and stands at a record high.
·         The poverty rate for African Americans reached its lowest level on record in 2017.
INVESTING IN DISTRESSED COMMUNITIES: President Donald J. Trump’s Opportunity Zone Incentives are promoting investment in left-behind, economically distressed communities.
·         President Trump’s historic tax cut legislation included new Opportunity Zone Incentives to promote investment in economically distressed communities across the country.
·         Opportunity Zones offer tax incentives for businesses to invest in economically distressed communities, making them a powerful vehicle for economic growth and job creation.
o    Nearly 35 million Americans live in communities designated as Opportunity Zones.
o    8,761 communities in all 50 States, the District of Columbia, and five United States territories have been designated as Opportunity Zones.
·         Through these tax incentives, we will jumpstart our American communities, create momentum for economic recovery, and attract investment to diverse areas across our Nation.
PROMOTING MINORITY-OWNED BUSINESS: Through job training, tax reform, and deregulation, President Donald J. Trump and his Administration are creating a better environment for minority-owned business.
·         President Trump is empowering minority business owners by eliminating a historic amount of unnecessary and burdensome regulations that too often hinder their growth.
·         Through the Department of Commerce’s Minority Business Development Agency, President Trump is delivering numerous new opportunities for minority business enterprises.
·         President Trump’s tax cuts included provisions that benefit minority-owned small businesses, a segment that contributes more than $1 trillion in annual economic output.
·         The President signed a memorandum dedicating at least $200 million a year to promote STEM education and especially benefitting women and minorities.
DELIVERING FOR HBCUs: President Donald J. Trump has made supporting our Nation’s Historically Black Colleges and Universities (HBCUs) a key priority for his Administration.
·         In February 2017, President Trump signed an Executive Order on the White House Initiative on Historically Black Colleges and Universities.
o    The Executive Order moved the White House Initiative on Historically Black Colleges and Universities to the White House from the Department of Education.
o    This was the earliest Executive Order on HBCUs signed by any President.
·         Earlier this year, President Trump signed legislation that increased Federal funding to HBCU programs by more than 14 percent.
·         The President signed legislation that forgave more than $300 million in Hurricane Katrina related debt that threatened New Orleans, Louisiana, area HBCUs. 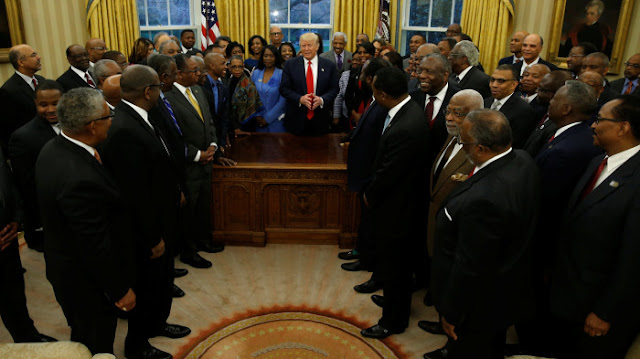 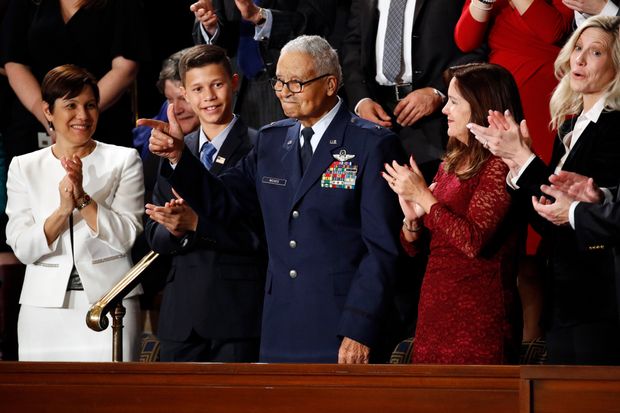 Former Tuskegee airman Charles McGee and his great grandson Iain Lanphier at the State of the Union address, Feb. 4.

President Trump's share of the black vote in 2016 was respectable. Even a small increase could put him over the top.

If his State of the Union address and Super Bowl commercial are any indication, President Trump is serious about increasing his support among black voters in November. He may or may not succeed, but we’re a long way from his cynical “What the hell do you have to lose?” pitch to blacks in 2016.

Mr. Trump outperformed John McCain in 2008 and Mitt Romney in 2012 among black voters, as administration officials never tire of reminding us. But that had less to do with Mr. Trump’s personal appeal and more to do with Barack Obama’s absence on the ballot in 2016. In recent decades, GOP presidential nominees have averaged around 12% of the black vote. Mr. Trump won only 8%, which is the worst performance of any Republican presidential candidate since 1976, except for Mr. McCain and Mr. Romney.

The best black outreach is strong economic growth, and the president is right to highlight the low unemployment rates and steady pay increases that have redounded to black workers’ benefit during his administration. Last year, median wage growth among blacks was higher than it was for whites. There is no denying that black Americans on balance are better off economically today than they were four years ago or at any point under the previous administration. If presidents deserve credit for such developments, give Mr. Trump his due.

Among other things, the president’s pitch to blacks includes touting his bipartisan criminal-justice reform and support for school choice. My guess is that the former won’t hurt him but that the latter could pay higher dividends at the ballot box.

On Twitter and MSNBC, blacks might obsess over the defects of our criminal-justice system. But outside those progressive bubbles, most black voters understand that the underlying problem in poor black communities is crime, not policing or the length of sentences handed down to lawbreakers.

Black families care far more about safe neighborhoods and functional schools, and Mr. Trump’s push for more education choices is very much in line with those priorities.

According to the National Alliance for Public Charter Schools, 67% of charter students are nonwhite and 58% come from low-income families. Nationwide, five million students are on waiting liststo attend charter schools, which had strong backing from the Clinton and Obama administrations.

Yet Bernie Sanders, Elizabeth Warren and other leading Democratic presidential candidates seeking the endorsement of teachers unions have vowed to curb the growth of charters. Richard Buery, an executive at the nation’s largest charter network, KIPP, told the New York Times last year that this new Democratic opposition to charters is “a reflection more broadly of the lack of respect for black voters” in the party.

“These are folks that should be champions of black children and allies of black educators,” said Mr. Buery, who is black and described himself as a Democrat.

Nor is education the only area where Mr. Trump could exploit the disconnect between black voters and the Democratic candidates who claim to represent them. Polling has shown, for example, that a majority of blacks oppose Medicare for All, which would eliminate private health insurance for millions who are happy with their coverage.

And you would be hard-pressed to find a critical mass of blacks who want to decriminalize illegal border crossing and pay higher taxes to cover the cost of providing free health care to poor immigrants.

If the president is serious about courting blacks, the changing demographics of black America might also aid his efforts. Black people of a certain age, by which I mean anyone who still takes organizations like the NAACP seriously, are probably lost to Republicans.

But the black population is younger than the white population, and black millennials have proved to be more persuadable than their elders. While black seniors will likely vote Democrat or stay home, there has been a weakening of black attachment to the Democratic Party among younger blacks and black men. Exit polls showed Trump winning 13% of black men in 2016, and the most heavily black neighborhoods in the country voted more Republican than in 2012.

Black newcomers from Africa and the Caribbean provide yet another opening for the president. The black immigrant population has more than quadrupled since 1980, according to research by Sharon Austin, a political scientist at the University of Florida who has studied black voting patterns in several major U.S. cities. Many of the new arrivals are Haitians and Jamaicans. Both groups are far less likely than blacks in general to vote Democrat.

Does any of this amount to Donald Trump running away with the black vote on Election Day? Of course not. But the president has already shown that he can win without much black support, and Democrats are deluding themselves if they don’t think he’s capable of improving on his 2016 performance. Black voters have far more to lose today than they did four years ago. 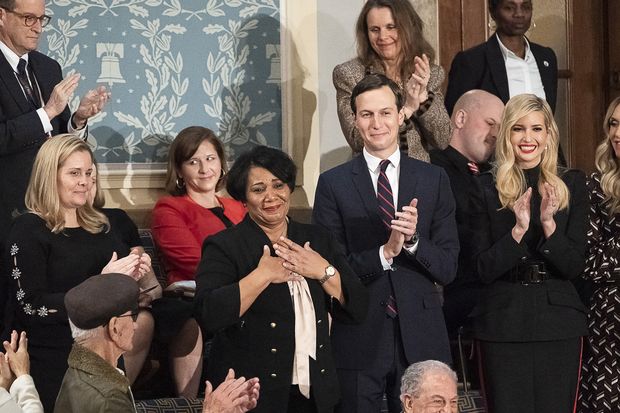 President Trump recognized Alice Johnson, center, who was granted clemency after serving time in a nonviolent drug case, in his State of the Union.
PHOTO: ANDREA HANKS/ZUMA PRESS

WASHINGTON—President Trump has had two major national audiences in the past five days, and both times he aimed a message at African-Americans, a group that overwhelmingly disapproves of the job he is doing but could help decide whether he gets to keep it.

During the Super Bowl, Mr. Trump’s campaign spent millions of dollars on a commercial featuring an African-American woman who had a drug sentence commuted by the president. “Politicians talk about criminal-justice reform,” the ad said. “President Trump got it done.”

At the State of the Union, Mr. Trump celebrated the low unemployment rate among African-Americans, talked of urban development zones, honored one of the last surviving Tuskegee Airmen and awarded a fourth-grader from Philadelphia, Janiyah Davis, with a school-choice scholarship.

While Mr. Trump’s re-election strategy mainly relies on motivating his conservative base, the focus on African-Americans, and a similar push for Hispanics, shows an effort to attract new voters. Only 8% of black voters went for Mr. Trump in 2016, but his campaign is confident it can improve on that. Even a small boost could help in battleground states such as Florida, Georgia, North Carolina, Virginia, Pennsylvania, Wisconsin and Michigan.

“There’s significant support out there that you’re not going to hear about but it will show up at the ballot box. People see results,” said Calvin Tucker, who directs minority outreach for the Republican Party of Pennsylvania. He noted that Mr. Trump in 2016 did better among black voters than the past two Republican nominees, Mitt Romney and John McCain.
...

The Trump campaign has been holding outreach events, seeking to shake the decadeslong dominance Democrats have held with black voters. It is a far different effort than 2016, when Mr. Trump lacked a record and simply asked, “What the hell do you have to lose?”

The campaign plans to continue an advertising campaign geared toward black voters, including African-American community newspapers and radio. Ads encourage people to text “woke” to receive updates. The campaign is also training activists to engage and register voters, according to a person familiar with the strategy.

With a strong economy at the president’s back, some Democrats say Mr. Trump’s outreach is a wake-up call.

“What we saw from Donald Trump was a 2020 surgical strategy,” said Quentin James, founder of the Collective PAC, which helps elect black candidates to office. Mr. James said Democrats need a large-scale program to engage with African-Americans and fears the party will play catch-up.

“We assume black voters will just vote for the Democratic Party like they always do,” he said. “Sure the numbers are there, but if Trump can get two or three more points with black men in swing states, this thing is over. I am very nervous.”

Michael Steele, a former chairman of the Republican National Committee who is also African-American, said Mr. Trump was smart to make a play for black voters.
...

—Aaron Zitner contributed to this article.

Write to Alex Leary at alex.leary@wsj.com