Report: 3 million more children in poverty under Obama, 22% of all kids

Ever since President Obama took office, the poverty rate among children has soared to 22 percent, with three million more children living in poor conditions, according to an authoritative new report.

The 2015 "KIDS COUNT" report from the Annie E. Casey Foundation said that the percentage of children living in poverty jumped from 18 percent in 2008, the year Obama was elected, to 22 percent in 2013. It added that the rate dropped from 2012 to 2013, in line with the improving economy. 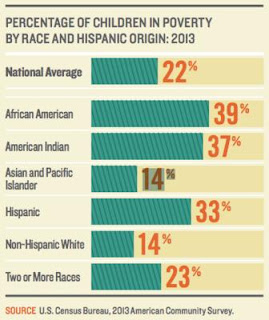 The rate of child poverty for 2013 ranged from a low of 10 percent in New Hampshire, to a high of 34 percent in Mississippi.

The child poverty rate among African Americans (39 percent) was more than double the rate for non-Hispanic whites (14 percent) in 2013.

The report also explained that a lack of jobs or good income above the poverty rate of $23,624 was the reason more children have grown up in poor families.

In 2013, three in 10 children (22.8 million) lived in families where no parent had full-time, year-round employment. Since 2008, the number of such children climbed by nearly 2.7 million.

Roughly half of all American Indian children (50 percent) and African-American children (48 percent) had no parent with full-time, year-round employment in 2013, compared with 37 percent of Latino children, 24 percent of non-Hispanic white children and 23 percent of Asian and Pacific Islander children."