The Migrants and the Elites

A humanitarian crisis threatens the future of Western institutions. 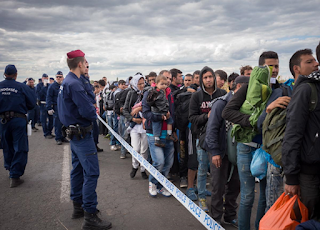 What a crisis Europe is in, with waves of migrants reaching its shores as the Arab world implodes. It is the biggest migration into Europe since the end of World War II and is shaping up to be its first great and sustained challenge of the 21st century. It may in fact shape that continent’s nature and history as surely as did World War I.

It is a humanitarian crisis. As Richard Haass of the Council on Foreign Relations notes, it will not soon go away, for two reasons. First, the Mideast will not be peaceful anytime soon and may well become more turbulent. Second, “The more that Europe responds the more it will reinforce the supply of migrants. Europe is caught.” If it doesn’t respond with compassion and generosity it is wrong in humanitarian terms; if it does, more will come and the problem grows. “This is now part of the architecture,” says Mr. Haass.

Three hundred eighty-one thousand detected migrants have arrived so far this year, up from 216,000 in all of 2014. Almost 3,000 died on the journey or are missing. The symbol of their plight is the photo of the 3-year-old Syrian boy, Aylan Kurdi, who drowned along with his mother and 5-year-old brother when their boat capsized near a Turkish beach. Just as horrifying is what was found inside a Volvo refrigerated truck stranded on the shoulder of the A4 highway 30 miles from Vienna in late August. Inside were 71 bodies, including a 1½-year-old girl, all dead of suffocation. They’d been left there by human smugglers.

It is a catastrophe unfolding before our eyes, and efforts to deal with it have at least one echo in America, which we’ll examine further down.

According to the U.N. refugee agency, 53% of the migrants are from Syria, 14% from Afghanistan, 7% from Eritrea, and 3% each from Pakistan, Nigeria, Iraq and Somalia. Seventy-two percent are men, only 13% women and 15% children. Not all are fleeing war. Some are fleeing poverty. Not all but the majority are Muslim.

The leaders of Europe have shown themselves unsure about what to do. It is a continentwide crisis that began in 2011, as Tunisians fled to the Italian island of Lampedusa. The following year, sub-Saharan Africans who’d migrated to Libya made for Europe after Muammar Gadhafi’s fall. Since then the European response has largely been ad hoc and stopgap. European Union President Jean-Claude Juncker has proposed a “permanent relocation mechanism” with EU members taking greater shares of the refugees, but it is unclear how exactly it would work.

In many EU nations there will be powerful pushback. Like the crisis itself the pushback will build. Europe is in economic drift. As this newspaper has noted, even Germany is growing at only 1.6% a year. Welfare systems will be strained. Youth unemployment is already high. In Britain the crisis could contribute to a vote to leave the EU outright. There are fears, which the elites take lightly, that floods of displaced people will “alter the cultural balance of the country for ever,” as the columnist Melanie Phillips put it in the Times of London. The Gulf states have not offered a home to their Arab and Muslim cousins. Dutch right-wing leader Geert Wilders this week called the wave of migrants an “Islamic invasion” in parliamentary debate, “an invasion that threatens our prosperity, our security, our culture and identify.” A recent poll showed 54% of Dutch voters opposed to welcoming more than the roughly 2,000 refugees previously agreed to. Hungary is building a fence.

Reading the popular press of Europe you see the questions. Do we not have a right to control our borders? Isn’t the refugee wave a security threat? ISIS is nothing if not committed to its intentions. Why would they not be funneling jihadists onto those boats?

Many things could be done to ease the crisis. States such as Jordan and Lebanon work hard to help refugees in neighboring countries and need help. Humanitarian relief is needed for the internally displaced. Go after the human smugglers, patrol the waters, take in those who are truly fleeing war and truly desire to become a peaceful part of their new, adoptive homes.

Damning “the elites” is often a mindless, phony and manipulative game. Malice and delusion combine to produce the refrains: “Those fancy people in their Georgetown cocktail parties,” “Those left-wing poseurs in their apartments in Brussels.” This is social resentment parading as insight, envy posing as authenticity.

But in this crisis talk of “the elites” is pertinent. The gap between those who run governments and those who are governed has now grown huge and portends nothing good.

Rules on immigration and refugees are made by safe people. These are the people who help run countries, who have nice homes in nice neighborhoods and are protected by their status. Those who live with the effects of immigration and asylum law are those who are less safe, who see a less beautiful face in it because they are daily confronted with a less beautiful reality—normal human roughness, human tensions. Decision-makers fear things like harsh words from the writers of editorials; normal human beings fear things like street crime. Decision-makers have the luxury of seeing life in the abstract. Normal people feel the implications of their decisions in the particular.

The decision-makers feel disdain for the anxieties of normal people, and ascribe them to small-minded bigotries, often religious and racial, and ignorant antagonisms. But normal people prize order because they can’t buy their way out of disorder.

People in gated communities of the mind, who glide by in Ubers, have bought their way out and are safe. Not to mention those in government-maintained mansions who glide by in SUVs followed by security details. Rulers can afford to see national-security threats as an abstraction—yes, yes, we must better integrate our new populations. But the unprotected, the vulnerable, have a right and a reason to worry.

Here is the challenge for people in politics: The better you do, the higher you go, the more detached you become from real life. You use words like “perception” a lot. But perception is not as important as reality.

The great thing in politics, the needed thing, is for those who are raised high in terms of responsibility and authority to be yet still, in their heads and hearts, of the people, experiencing life as a common person on an average street. The challenge is to carry the average street inside you. Only then, when the street is wrong, can you persuade it to see what is right.

The biggest thing leaders don’t do now is listen. They no longer hear the voices of common people. Or they imitate what they think it is and it sounds backward and embarrassing. In this age we will see political leaders, and institutions, rock, shatter and fall due to that deafness.