Most political women pander to gender, but Fiorina wants to make it on the merits.
By Kimberley A. Strassel 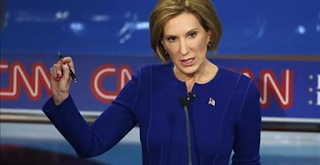 Asked during Wednesday’s GOP debate which woman he’d put on the $10 bill, Jeb Bush named Margaret Thatcher. As Mr. Bush then joked that it would probably be illegal to put a British prime minister on American currency, eyes flicked to the woman standing to his left. Quite so.

Carly Fiorina isn’t Margaret Thatcher, just as her Republican rivals aren’t Ronald Reagan. Yet Ms. Fiorina has a bit of Thatcher about her—and in one way in particular. She isn’t a woman running for president. She’s a presidential contender who happens to be a woman.

Women Democrats pander on gender issues—abortion, birth control, the myth of unequal pay. They promise female voters special handouts. They pitch their womanhood as a qualification for office. And their base loves it.

This was Elizabeth Dole’s problem in her fleeting 2000 presidential bid. Ms. Dole ran on her gender, arguing America ought to elect its first female president—which was no argument at all. It was a problem in 2012 for Michele Bachmann, who loved to claim special insight as “a mother of five” and a “homemaker.” It was a problem for Sarah Palin, whose occasional flubs allowed late-night comics to undermine her seriousness as a vice-presidential candidate.

The Iron Lady didn’t do identity politics, and Ms. Fiorina doesn’t either. At the debate she offered unadulterated substance. She was informed, focused, specific. Want to know what Carly thinks of Putin? Here. Need Carly to explain how hard it is to alter the 14th amendment? Right at ya. Curious if Carly is familiar with Gen. Qasem Soleimani, head of Iran’s Quds Force, and where he’s traveled lately? Boom, boom, boom.

Ms. Fiorina had the opportunity to play the gender card, but she didn’t. Asked about Donald Trump’s comments on her appearance, she might have derided the billionaire as a misogynist. She didn’t. When Chris Christie essentially told her to shut up, she might have looked wounded and wilted. She didn’t.

It isn’t that Ms. Fiorina doesn’t talk about women, or ignores that she is one. It’s simply that she acknowledges it matter of factly, and in the context of opportunity for all. As the men on stage fumbled to think of a lady heroine to grace the $10 bill, Ms. Fiorina demurred. “I wouldn’t change the $10 bill or the $20 bill. I think, honestly, it’s a gesture,” she said. “We ought to recognize that women are not a special interest group.”

She also seems to have mastered the difference between being emotional and being relatable. Every politician seeks to make a connection with voters, but it’s a tougher balancing act for women. Witness the endless fretting in Hillary Clinton’s camp about how to make her more likable, more human, while still projecting toughness and fearlessness.

Ms. Fiorina doesn’t try to do warm or fuzzy or cutesy or folksy. She rarely deviates from her no-nonsense tone. Instead of show, Ms. Fiorina tells. Her story about how she and her husband “buried a child to drug addiction” was a notable moment in the debate. It made her real, a person that many Americans could relate to. As did her obvious revulsion at the practices of Planned Parenthood.

None of this is to say that Ms. Fiorina is unaware of the special challenge of being a female candidate. Her debate performance proved she’s in fact highly aware of it, and that certain additional things are therefore required of her.

One of these is to offer proof that she can be an effective commander in chief. Guys don’t have to do that; girls do. It’s no accident that Ms. Fiorina was the only candidate to propose rebuilding the Sixth Fleet, to suggest restarting a missile defense program in Poland, and to run through how many Army brigades and Marine battalions are necessary for an effective U.S. military.

This gets to the other thing Ms. Fiorina knows she has to do: her homework. Republican female presidential candidates are rare; the base is still getting comfortable with it. She knows she can’t slip up. Her Wednesday performance—from her mastery of facts, to her fluid delivery, to her zingers—was clearly the work of hours upon hours of study and debate prep.

It was Thatcher who famously said, “In politics, if you want anything said, ask a man. If you want anything done, ask a woman.” Ms. Fiorina has a long way to go to the presidency. But win or lose, she’s running far better than any Republican woman before her.