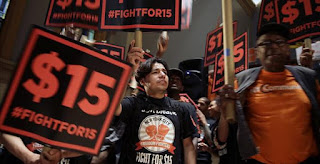 Are liberals better at economics or are they just more adept at selling ideas that drive purely on emotion? Increasing the minimum wage is a perfect example. Raising it increases the living standards for those who struggle earning such a wage, and those who are against it–Republicans–are just anti-poor cretins who have no heart. The political campaign almost sells itself. Yet, we’re against it not because we hate poor people–that’s unadulterated nonsense. We’re against it because hurts workers, which is something that we’ve been saying ad nauseum, but alas, liberal intransigence and stubbornness on this issue has resulted in over 700,000 jobs being cut over the past couple years.

Piggybacking off Daniel’s post last week, Seattle’s progressives have seen their minimum wage increase blow up in their faces. Workers are now demanding fewer hours. Why? The city’s $15 minimum wage law means that they’re ineligible for other welfare services. So, the burden of the law falls entirely on the employer, with the employees wanting to work less so they can remain on the government programs. It is laziness or just immaturity; that being you have to pay more in taxes and are ineligible for certain programs once you start making more money? That’s a debate for another time.

The American Action Forum has provided an analysis of the minimum wage and other economic policies from the Obama administration, which was supposedly meant to help the middle class. Spoiler alert: it hasn’t:

In 2013 High Minimum Wages Cost 747,700 Jobs: In 2013 a $1 increase in the minimum wage was associated with a 1.48 percent increase in the unemployment rate, which amounted to 747,700 jobs. States with minimum wages above the federal standard are lagging behind their counterparts by a full percentage point. The increases will lead to fewer jobs for those who need them the most.

According to a study by Jeffrey Clemens and Michael Wither from the University of California San Diego, the last time the federal minimum wage increased (from $5.15 to $7.25), employment among those earning less than $7.50 decreased by 8% nationally. That amounted to 1.7 million fewer jobs. As a result, average monthly income fell by $100. Read more here for fascinating data on its effect on mobility, poverty, and unpaid work.

The Affordable Care Act has reshaped American healthcare and affected the middle class, but not in a positive way financially.

Small businesses have been some of the hardest hit. AAF research found that Obamacare has reduced the wages of small business workers (offices with 20-99 employees) by $22.6 billion annually and cost those small businesses 350,000 jobs.

The ACA has also led to workers’ hours being cut. As Nate Silver’s 538 site wrote this past January, “the evidence suggests [the Affordable Care Act] has led some employers to limit the hours of workers who were already part-time, effectively giving a pay cut to some of the most vulnerable Americans.”