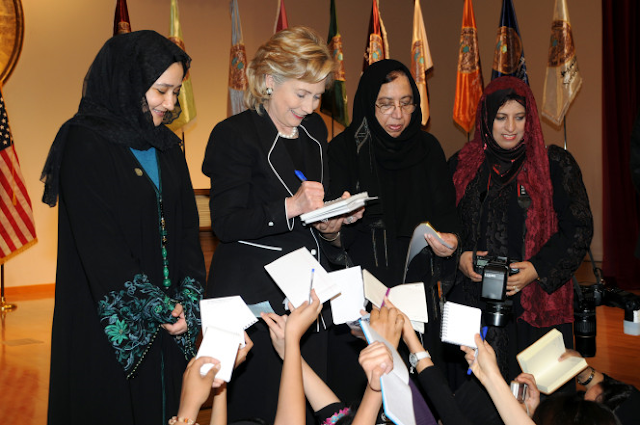 Hillary Clinton at the Dar al-Hekma college for women during a "town hall" meeting in the Red Sea port city of Jeddah in 2010. Abedin's mother, Dr. Saleha Mahmood Abedin, is second from right, standing next to Clinton. Photo: Getty Images


As secretary of state, women’s-rights champ Hillary Clinton not only spoke at a Saudi girls school run by her top aide Huma Abedin’s ­anti-feminist mother, but Clinton invited the elder Abedin to participate in a State Department event for “leading thinkers” on women’s issues.
This happened despite ­evidence at the time that Saleha M. Abedin had explored the religious merits of sexual submissiveness, child marriage, lashings and stonings for adulterous women, and even the ­circumcision of girls.
The elder Abedin, whose daughter helps run Clinton’s presidential campaign, did take a pro-gender-equality stance on at least one issue: Muslim women’s right to participate in violent jihad alongside men.
As The Post first reported, Huma’s mom edits the Journal of Muslim Minority ­Affairs, which has suggested that America had 9/11 coming to it, because of “sanctions” and “injustices” the US allegedly imposed on the Muslim world.
The journal also opposed women’s rights as un-Islamic, arguing that “ ‘empowerment’ of women does more harm than benefit.”
But that’s not all.
In 1999, Saleha translated and edited a book titled “Women in Islam: A Discourse in Rights and Obligations,” published by the Institute of Muslim Minority Affairs. Written by her Saudi colleague Fatima Naseef, the book explains that the stoning and lashing of adulterers, the killing of apostates, sexual submissiveness and even female genital mutilation are all permissible practices ­under Sharia law.
“The wife should satisfy her husband’s desire for sexual intercourse,” the book states on Page 202, even if she is not in the mood. “She has no right to abstain except for a reasonable cause or legal prohibition.”
But getting in the mood may be difficult. The book says female genital mutilation is permissible: ­“Cir­cumcision for women is ­allowed.”
Laws promoting feminist equality, moreover, are ineffectual, since “man-made laws have in fact enslaved women, submitting them to the cupidity and caprice of human beings. Islam is the only solution and the only escape.”
And forget about working in a position of authority: “Her job would involve long hours of free mixing and social interaction with the opposite sex, which is forbidden in Islam,” the book says. 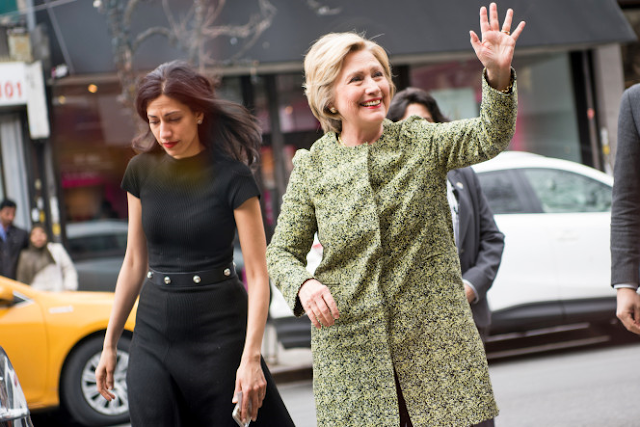 “Moreover, women’s biological constitution is different from that of men. Women are fragile, emotional and sometimes unable to handle difficult and strenuous situations,” it explained. “Men are less emotional and show more perseverance.”
There is one exception to the sexual division of roles: “Women can also participate in fighting when jihad ­becomes an individual duty.”
On the back cover, Saleha says she is “pleased to launch” the book as part of a series on the study of women’s rights in Islam sponsored by the International Islamic Committee for Woman and Child (IICWC), for which she is listed as chairperson.
Founded by Huma’s mom, the Cairo-based IICWC has advocated for the repeal of Egypt’s Mubarak-era laws in favor of implementing Sharia law, which could allow female genital mutilation, child marriage and marital rape.
Saleha is paid by the Saudi government to advocate and spread Sharia in non-Muslim countries like America.
In 1995, less than three weeks before Clinton gave her famous women’s-rights speech in Beijing, Saleha headlined an unusual Washington conference organized by the Council on American-Islamic Relations to lobby against the UN platform drafted by Clinton and other feminists. Visibly angry, she argued it runs counter to Islam and was a “conspiracy” against Muslims.
Specifically, she called into question provisions in the platform that condemned domestic battery of women, apparently expressing sympathy for men who commit abuse.
Pakistan-born Saleha main­tained that men who serially beat women tend to be unemployed, making their abuse somehow more understandable. “They are victims of a different kind,” she claimed. “And they are simply taking [their frustrations] out on women.”
Despite all this, Huma Abedin in 2010 arranged for Clinton, then the secretary of state, to travel to Jeddah, Saudi Arabia, to meet with her mother and speak at a girls school she founded and helps run as dean. Speaking to a roomful of girls, Clinton said Americans have to stop stereotyping Saudi women as oppressed, before assuring the audience that not all American women go “around in a bikini bathing suit.”
While there, Clinton formed a partnership with Saleha’s Dar al-Hekma college called the US-Saudi Women’s Forum on Social Entrepreneurship, and prom­ised to reverse post-9/11 curbs on Saudi student visas to America.
The next year, Clinton invited Saleha and the president of the Saudi school to Washington to participate in a State Department colloquium on women, as revealed by internal emails released in response to a lawsuit filed by Judicial Watch.
Clinton campaign spokesman Nick Merrill told the Post that while Huma Abedin was in fact listed as an editorial staffer of her mother’s radical journal from 1996 to 2008, she didn’t really do anything for the publication in her long tenure there.
Asked if Clinton regrets honoring the Islamist mother and bestowing ­legitimacy on her extreme views, Merrill had no comment.


Paul Sperry is author of “Infiltration: How Muslim Spies and Subversives Have Penetrated Washington.”