Will the Clinton Foundation Mark the Fall of Our Republic? 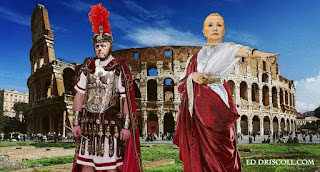 No matter how extreme the future revelations of Julian Assange and others turn out to be, the truth about the Clinton Foundation is already clear. Whatever its original intentions, this supposed charity became a medium to leverage Hillary Clinton's position as secretary of State for personal enrichment and global control by the Clintons and their allies.  We also now know—as the Wall Street Journal's Kimberley Strassel made clear in her recent oped—why Hillary decided to hide all her emails on her "infamous server."

To my knowledge, nothing like this has ever been done in the history of the United States government. It calls to mind, if anything, the United Nations' scandalous Oil-for-Food program in which millions were siphoned off from a plan to feed Iraq's children during the war.

It could even be worse, because of the national security implications. The Clinton Foundation and the State Department were commingled to such an extent we may never know the truth, certainly not before the election since that same State Department has refused to release Hillary's official schedule before then.

This means, quite simply, that the United States of America has abandoned the rule of law. Maybe we did a while ago. In any case, we are now a banana republic—a rich and powerful one, at least temporarily, but still a banana republic.

The election of Hillary Clinton—our own Evita—will make the situation yet more grave. Consider something so basic as how you raise your children in a country where the president is most probably an indictable criminal and most certainly a serial liar of almost inexhaustible proportions. What do you tell them? What do their teachers tell them? A far cry from George Washington, isn't it? What does this say about our basic morality and how does that affect all aspects of our culture? The fish, as they say, rots from the top.

Equally importantly, what does our government do as further actionable information emerges as it inevitably will? The Department of Justice, as we have seen, is already corrupt, unable to indict those in power, indeed colluding with them aboard airplanes. The same personnel will undoubtedly be in place. Can we rely on congressional oversight for justice and/or a potential impeachment? What if the Democrats control the Senate?

In the far less serious Watergate era, Republicans like Howard Baker stood up against Nixon. Democrats, however, cling to power the way they accuse Republicans of clinging to their guns and religion and will no doubt avert their eyes, pretending, with their friends in the media, that nothing out of the norm is happening. But plenty is and will. Look to Sweden for the future of America.   And with expanded entitlements and immigration, Syrian and otherwise, don't look for a Republican revival in 2020. Those days will be long over.

"A republic, if you can keep it," Benjamin Franklin reportedly said when emerging from the Constitutional Convention of 1787.  Yes, it may be apocryphal, but so are many important statements that are true in concept.

Which leads us to Donald Trump (as usual).

He is, like it or not, the last man standing to prevent this. He and all of us. And that includes you, NeverTrumpers. There is nothing, repeat NOTHING, that Trump has ever done that comes remotely within the proverbial spitting distance (even from a dragon) of the malfeasances of the Clinton Foundation. The big difference between Trump and Clinton is this: What distresses us about Donald is what he says. What distresses us about Hillary is what she does. Anyone with an IQ in the also proverbial triple digits knows which is worse.

It's time for the NeverTrumpers to abandon what's left of their crusade for the sake of the country.