Hillary Clinton Emails - TOO TOP SECRET FOR CONGRESS TO SEE! 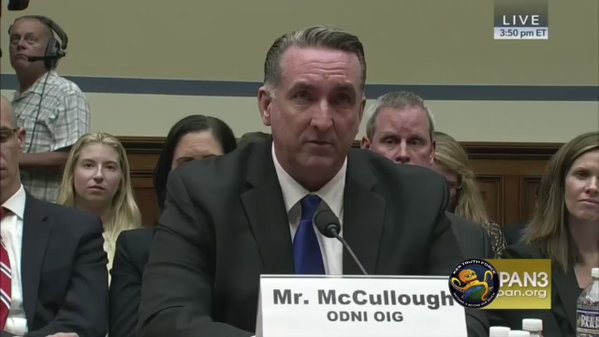 
The Deputy Inspector General didn't even have the security clearance to see those emails.
He couldn't even tell Congress the name of the agency that the emails came from.
Hillary Clinton jeopardized our national security by allowing someone in an unprotected format and without a security clearance to see highly sensitive emails.
See this video of the Deputy Inspector General's congressional testimony to fully grasp the severity of Hillary Clinton's email breach.


To compound her egregious behavior, Hillary Clinton is continuing to lie to the American people about her email scandal and the FBI’s findings.
The Washington Post’s Fact Checker reports: As we have seen repeatedly in Clinton’s explanations of the email controversy, she relies on excessively technical and legalistic answers to explain her actions.
While Comey did say there was no evidence she lied to the FBI, that is not the same as saying she told the truth to the American public–which was the point of Wallace’s question.
Comey has repeatedly not taken a stand on her public statements. And although Comey did say many emails were retroactively classified, he also said that there were some emails that were already classified that should not have been sent on an unclassified, private server. That’s the uncomfortable truth that Clinton has trouble admitting.

Four Pinocchios.
Complied by the RNC


The Washington Post describes the atmosphere of fear now haunting the Hillary campaign in the aftermath of an email dump showing how the DNC swindled Sanders. A team of writers notes of "the anxiety for Democrats: Are more leaks to come?":


Activists and campaign officials, anxious about what leaks may be yet to come, also worried about the alleged involvement of the Russian government, with campaign officials suggesting that the Kremlin was releasing the documents to damage Clinton’s candidacy. National security experts, while cautious about leaping to premature conclusions, warned of the possibility of a significant escalation in an ongoing information war.


If the Russians were behind the leaks, said former CIA director Michael Hayden, “they’re clearly taking their game to another level. It would be weaponizing information.” He added: “You don’t want a foreign power affecting your election. We have laws against that.”


It is doubtful that Putin is worried, but anyone in Washington who once knew a skeleton is now looking over his shoulder:


"As journalists and political operators pored over the 20,000 emails leaked from the servers of the Democratic National Convention, one Democratic staffer frantically searched for his name. It was only when he failed to find it, that he began to fear for the worst."


“Like everyone in D.C., I immediately searched my name,” said the strategist who works with the DNC. “I wasn’t in there which I was happy about, until I realized just how sinister this leak actually was.”


The staffer, like cybersecurity officials who spoke to BuzzFeed News, said the leaks were sinister because those behind the attack might be drip-feeding the emails to the public to create maximum damage for the Clinton campaign.


The question now is what comes next -- according to the security firm Crowdstrike, the hackers were parked in the DNC servers for months, raising the possibility that there may still be more emails to come, potentially some that are fabricated.


On the eve of Hillary's coronation, her courtiers are suddenly waking up to the fact that she cannot protect them.


The shock may be intentional. If Putin was indeed behind the hacking, he is only doing what underdogs through history have done to even the odds. Unable to match the foe in weight, he went for the king, or in this case the queen.


Recall how in ancient Gaugamela, the outnumbered Alexander staked everything on a thrust at Darius. Darius fled in fear. When the mass of the Persian army saw this, they scattered in dismay. By demonstrating the impotence of Darius, Alexander broke the Persian monarch's aura and with it his majesty. Alexander knew that for a king to rule he must be regarded as more than mortal by the masses. Once the king is humiliated and put to flight he becomes psychologically no better than his subjects and the greater part of his power vanishes.


By striking at Hillary's aura, the Russians may be attempting the same thing. Democratic voters looked up to her to protect and defend the nation because that's what presidents do. By hacking Hillary and humiliating her, Putin has sent the message that she cannot even defend herself -- and what's the use of a president who can't defend herself?


This is why the Taliban targets the chiefs of police and the district heads to show the populace that their leaders are vulnerable, that no protection can be expected from them. The same threat logic is being applied by Putin.


Amazingly, the DNC has compounded the blow by turning it into a talking point. They are acting as if Hillary were a child needing sympathy because her lollipop has been stolen by a bully, rather than a competent person in firm command.


In so doing, they're admitting that Hillary cannot hold her own with the hard men of Putin's caliber. You don't elect a victim to protector-in-chief unless you want to be one yourself.


America may be ready to elect its first woman president. But is it ready to select its first victim-president? Hillary is now jumping at shadows. The extraordinary sights -- Bernie Sanders signs being collected throughout the convention, a wall of dividers being erected around the podium -- are mute testimony to how threadbare the Clinton image of invincibility is wearing.


The worst part of it is the snare Putin may be slipping around Clinton was one of her own device. The New York Times summarized the State Department's inspector general report recounting how she went outside the wire:


The State Department’s inspector general on Wednesday sharply criticized Hillary Clinton’s exclusive use of a private email server while she was secretary of State, saying that she had not sought permission to use it and would not have received it if she had.


The inspector general found that Mrs. Clinton “had an obligation to discuss using her personal email account to conduct official business” with department officials but that, contrary to her claims that the department “allowed” the arrangement, there was “no evidence” she had requested or received approval for it.


She is now being ambushed for her troubles. Hillary walked right into it. She has been outsmarted, time and again: the Russian Reset, the Arab Spring, Benghazi, and now in her effort to protect her information from threats she was warned against but refused to take seriously.


The Brouhaha Over Trump’s ‘Treason’


Years ago the Hillary campaign boasted that when the 3 o'clock in the morning phone call came, Hillary would be ready. What she'll be ready for, she didn't say. Now the chances are that when the phone rings at 3:00 a.m. it will be Putin calling her on her private line, on the number she never gave him.


Donald Trump impressed a local editorial board in Colorado with his warmth and knowledge on the issues.


The Colorado Springs Gazette editorializes: Meeting with The Gazette's editorial board Friday, Donald Trump exuded a level of warmth, vulnerability and humility that surprised us. He was nothing like the strident buzzsaw so often seen on TV.
Trump gave us 35 minutes for a thoughtful discussion on national defense, the Veterans Administration, marijuana, the Supreme Court and more.
Posted by Frances Rice at 3:52 PM