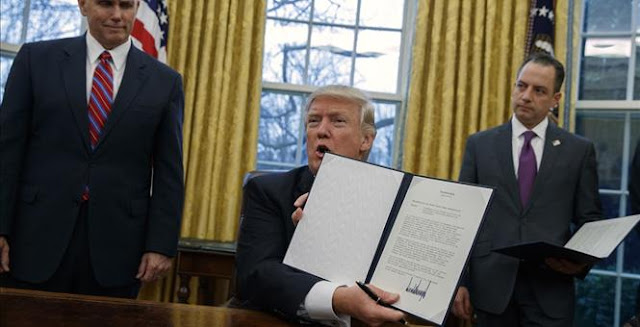 By Matt Vespa
As expected, President Donald J. Trump has just signed two executive orders that call for the construction of a border wall and outlines a new agenda regarding immigration enforcement. It's done. Bloomberg's Jennifer Jacobs reported one of the orders puts an end to catch-and-release, U.S. Customs and Border Protection personnel by 5,000 people, and seeks to put an end to asylum fraud.
The second order seeks to end sanctuary cities, identify criminal illegal aliens, triple the amount of Immigration and Customs Enforcement agents, and empower them to enforce federal immigration laws. It will also create victims advocacy office for Americans who loved ones had been victimized by people who should have never been here in the first place.
The issue of sanctuary cities reached new heights in 2015, when an illegal alien who had been deported five times killed Kate Steinle on a San Francisco pier.


The World Turned Upside Down 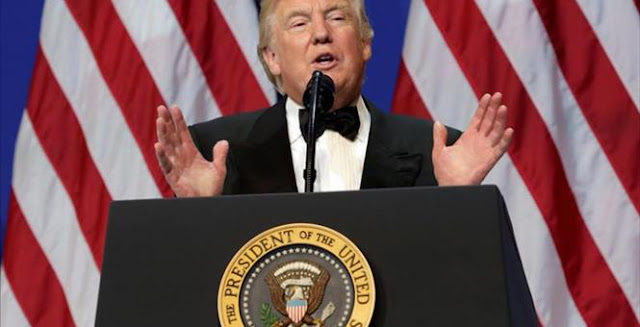 
"If summer were spring and the other way 'round,
Then all the world would be upside down."
-- Old English ballad


Legend has it that the British played "The World Turned Upside Down" after their unforeseen and disastrous defeat at the Battle of Yorktown.
Such topsy-turvy upheaval characterizes the start of Donald Trump's presidency.
Everything is in flux in a way not seen since the election of 1932, in which Franklin D. Roosevelt defeated Herbert Hoover. Mainstream Democrats are infuriated. Even Republicans are vexed over the outsider Trump.
Polls, political pundits and "wise" people, guilty of past partisan-driven false prognostications, remain discredited. Their new creased-brow prophesies of doom for President Trump are about as credible as their past insistence that a "blue wall" would keep him out of the White House.
The media collusion with the Clinton campaign was endemic in the WikiLeaks email trove. The complicity blew up any lingering notion that establishment journalists are disinterested and principled, as they now turn from eight years of obsequiousness to frenzied hostility toward the White House.
In the media's now radically amended progressive dictionary, Senate filibusters are no longer subversive, but quite vital.
Executive orders are no longer inspired, but dangerous. Bypassing Congress on treaties and overseas interventions, or refusal to enforce existing laws, is no longer presidential leadership. If Trump follows Obama's example of presidential fiats, he will be recalibrated as seditious.
Protests against a sitting president are no longer near treasonous, but patriotic. Media collusion with the president is no longer natural, but unprofessional and dishonest. Cruel invective against the president and his family is no longer racist, but inspired.
The successful Obama electoral matrix of ginning up political support through identity politics may have been an atypical event, not a wave of the future. His two victories were certainly non-transferrable to most other liberal but non-minority candidates.
Obama's legacy is the near-destruction of the Democrats as a national party, leaving them in a virtual civil war while most of his own initiatives will be rendered null and void -- and perhaps soon forgotten.
Where do Democrats go now? Do they double down by going further leftward with Sens. Bernie Sanders and Elizabeth Warren? Or do they reluctantly pivot to win back the clingers, deplorables and irredeemables whose defections cost them the big Rust Belt states?
On Nov. 7, "experts" were forecasting a Republican civil war: a disgraced presidential candidate, a lost Senate and a liberal Supreme Court for the next 30 years.
Two days and an election later, the world flipped. Republicans -- with majorities in both houses of Congress, overwhelming majorities in the state legislatures and with governorships, and a likely slew of Supreme Court vacancies -- haven't been in a better position since the 1920s.
Just as importantly, former Sen. Harry Reid and President Emeritus Barack Obama weaponized Trump by respectively eroding the Senate filibuster and green-lighting presidential fiats by "pen-and-phone" executive orders.
For his Cabinet picks, Trump ignored Washington-establishment grandees, think-tank Ph.D.s, and academics in general. He owes no allegiance to the Republican pundits who despised him or to the big-name donors who chose not to invest in what they saw as a losing candidacy.
His style is not Washingtonian, but is born out of the dog-eat-dog world of Manhattan real estate. Trump's blustering way of doing business is as brutal as it is nontraditional: Do not initiate attacks, but hit back twice as hard -- and low -- once targeted. Go off topic and embrace obstreperousness to unsettle an opponent. And initially demand triple of what is eventually acceptable to settle a deal.
Trump's inaugural address was short, tough and nationalistic, reflecting his don't-tread-on-me pledges to his supporters to fight both Washington and the world abroad to restore the primacy of the middle classes.
Trump aims through economic growth -- hoping for 4 percent GDP growth rates through deregulation, tax reform, energy production and old-fashioned Main Street economic boosterism -- to win a sizable chunk of the minority vote and thus chip away at the Democrats' base. He counts on a good-paying jobs and higher family income mattering more to the inner-city than the Rev. Al Sharpton's rhetoric or the demonstrations of Black Lives Matter.
The world has been flipped upside down abroad as well.
Weeks ago, analysts were offering Dr. Strangelove doomsday warnings of a no-fly zone in Syria imposed by a likely President Hilary Clinton on another nuclear power's air force. But now, Russian strongman Vladimir Putin is talking about joining American planes to destroy ISIS.
Who is friend, foe or neutral?
Could Trump coax Putin away from his Iranian and Syrian support, or will Trump appease his newfound friend's aggressions? No one quite knows.
An American president now talks to Taiwan, doubles down on support for Israel, questions the reason to remain loyal to both the United Nations and European Union, and forces changes in NATO.
Not just policy, but the way policy is made, remains uncertain.
Up is down; down up. The future is blank.