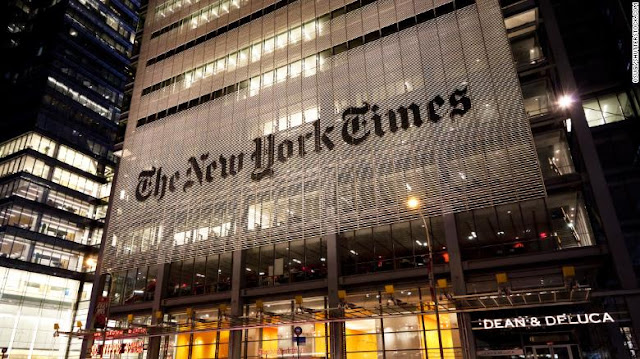 Dean Baquet, the executive editor of the New York Times, said recently that, after the Mueller report, the paper has to shift the focus of its coverage from the Trump-Russia affair to the president's alleged racism.

"We built our newsroom to cover one story, and we did it truly well," Baquet said. "Now we have to regroup, and shift resources and emphasis to take on a different story."

Baquet made the remarks at an employee town hall Monday. A recording was leaked to Slate, which published a transcript Thursday.

In the beginning of the Trump administration, the Times geared up to cover the Russia affair, Baquet explained. "Chapter 1 of the story of Donald Trump, not only for our newsroom but, frankly, for our readers, was: Did Donald Trump have untoward relationships with the Russians, and was there obstruction of justice? That was a really hard story, by the way, let's not forget that. We set ourselves up to cover that story. I'm going to say it. We won two Pulitzer Prizes covering that story. And I think we covered that story better than anybody else."

But then came the Mueller report, with special counsel Robert Mueller failing to establish that the Trump campaign conspired or coordinated with Russia to fix the 2016 election.

"The day Bob Mueller walked off that witness stand, two things happened," Baquet continued. "Our readers who want Donald Trump to go away suddenly thought, 'Holy shit, Bob Mueller is not going to do it.' And Donald Trump got a little emboldened politically, I think. Because, you know, for obvious reasons. And I think that the story changed. A lot of the stuff we're talking about started to emerge like six or seven weeks ago. We're a little tiny bit flat-footed. I mean, that's what happens when a story looks a certain way for two years. Right?"

Baquet used the gentlest terms possible — "the story changed" — but the fact is, the conspiracy-coordination allegation the Times had devoted itself to pursuing turned out to be false. Beyond that, Democrats on Capitol Hill struggled to press an obstruction case against the president. The Trump-Russia hole came up dry.

Now, Baquet continued, "I think that we've got to change." The Times must "write more deeply about the country, race, and other divisions."

"I mean, the vision for coverage for the next two years is what I talked about earlier: How do we cover a guy who makes these kinds of remarks?" Baquet said. "How do we cover the world's reaction to him? How do we do that while continuing to cover his policies? How do we cover America, that's become so divided by Donald Trump?"

The town hall was spurred by angry reaction, both inside and outside the Times, to a headline that many on the Left faulted for being insufficiently anti-Trump. After the El Paso shootings, when the president denounced white supremacy, the Times published a page-one story with the heading, "Trump Urges Unity Vs. Racism."

"I think one of the reasons people have such a problem with a headline like this ... is because they care so much," one staffer said to Baquet. "And they depend on the New York Times. They are depending on us to keep kicking down the doors and getting through, because they need that right now. It's a very scary time."

Baquet vowed a transition to a new "vision" for the paper for the next two years. "How do we grapple with all the stuff you all are talking about?" he said to the staffer. "How do we write about race in a thoughtful way, something we haven't done in a large way in a long time? That, to me, is the vision for coverage. You all are going to have to help us shape that vision. But I think that's what we're going to have to do for the rest of the next two years."

The headline controversy, it appears, was a preview of a new 2019-2020 New York Times. If Baquet follows through, the paper will spend the next two years, which just happens to be the run-up to the 2020 presidential election, building the Trump-is-a-racist narrative. (Baquet added, almost as an afterthought, that the Times will "continu[e] to cover his policies.")

The employee town hall was not intended to be public. But the Times is a news organization, and no one could be surprised that a recording of it leaked, possibly by Times employees who want to push Baquet in an even more anti-Trump direction. In any event, it's now public. And the results will play out for the next two years.

https://www.washingtonexaminer.com/opinion/columnists/new-york-times-chief-outlines-coverage-shift-from-trump-russia-to-trump-racism
Posted by Frances Rice at 11:21 AM