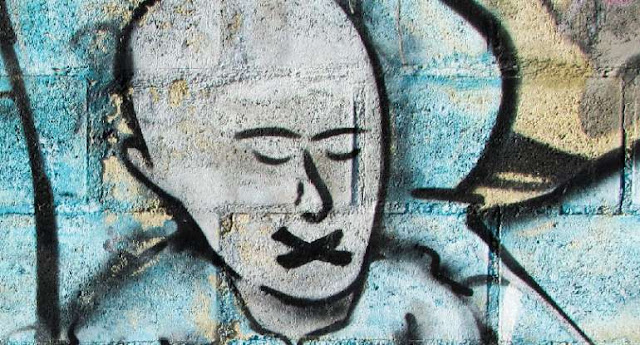 (Image by Dimitris Vetsikas via Pixabay)

The left is obsessed with white supremacists the way that children are obsessed with Santa Claus, and for more or less the same reasons.

You see, if they manage to convince people that the alternative to their own crazy, race-obsessed, power-centralizing, socialist policies is white supremacy, then they get everything they ever wanted, plus a pony.

In an America as mixed as we are, the idea that white supremacists are the only ones who will do well is scary to most people. Beyond that, it is the most antithetical thing to American beliefs you can imagine. The nation that banned nobility of birth, and which fought a war to free slaves would never codify a regime where your genetics at birth determines what kind of happiness you can even think of pursuing.  In America, equality under the law has always been the goal, even when honored in the breach.

Fortunately, we don't have any need to worry about real white supremacy. Just like you don't have to worry that Santa Claus is watching you, or has put a spy bug in your bedroom.

This is the problem the left has.  And their response to it is to launch a brainwashing/gaslighting campaign to find white supremacy where there is none.

Also, unfortunately, as with all these things the left engages in, it causes more harm than... well, than even I can imagine, and I write some pretty dystopian stuff.

So, just like their attempt to define "patriarchy" has led them to make it impossible for business women to have closed-door meetings with male bosses or mentors, their definition of white supremacy is making it impossible for any minorities or, for that matter, under-privileged white people to improve themselves or create a better future for their descendants.

For instance, according to the New York Post, this is what passes for fighting white supremacy in NYC schools: Richard Carranza held ‘white-supremacy culture’ training for school admins.

This presentation included the following slide: 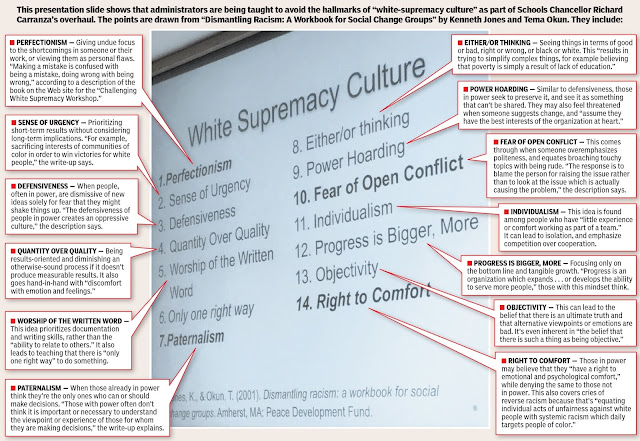 We'll pass over the point that defensiveness is supposed to be a matter of white supremacy, okay?  Apparently, when you're being accused of horrible stuff, you're not supposed to be defensive. Yeah. That's interesting.

Instead, let's consider that individualism is now supposed to be white supremacy, and if you like working on your own, or dislike group work (remember group work from school? Almost anyone competent hated it) you're supposedly a white supremacist.

Let's consider instead stuff like perfectionism -- you know, trying to make things as perfect as possible and calling out people on their f*ck ups. Or a sense of urgency -- or as we call it around here, having your work done on time. Or what they call "worship of the written word," which apparently is the ability to express yourself in writing. Or objectivity, which they define as BELIEVING THERE'S AN ULTIMATE TRUTH.

Supposedly all of these things -- things that are absolutely required for any kind of workplace to get any kind of, you know, work done -- are toxic whiteness and signs of white supremacy.

So, the left, in teaching people to avoid white supremacy, assumes that minorities cannot express themselves in writing, can't get things done on time, and won't try to make the work as good as possible.
In other words, the left are in fact the white supremacists who believe any virtue that contributes to civilization must be white. The fact that they then want to suppress it -- in everyone but themselves -- is probably part of their plan to concentrate power.

Also, it's the reason why every institution taken over by leftists falls apart and dies.

And they have not the slightest bit of care for the people -- minorities and non-minorities -- this nonsense hurts.  Because in their minds, the more other people are hampered, the more power they get in their grubby little hands.