Why Are We Hearing About the White Supremacist in El Paso and Not the Liz Warren Supporter in Dayton? 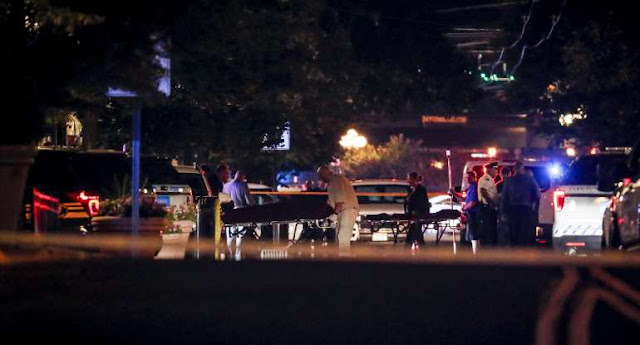 Bodies are removed from at the scene of a mass shooting, Sunday, Aug. 4, 2019, in Dayton, Ohio. Several people in Ohio have been killed in the second mass shooting in the U.S. in less than 24 hours, and the suspected shooter is also deceased, police said. (AP Photo/John Minchillo)

It's notoriously difficult to perform experiments on humans, especially on large groups of humans, but every so often something happens that may not be a perfect control, but still looks awfully close.

This weekend was one of those opportunities when there were two mass shootings in as many days. One was in El Paso and is all over the news and Twitter today. He was an eco-fascist inspired by the Christchurch shootings and decided the big issue was Mexicans.

I'm sure you heard about him, and you heard that he was a "white supremacist." Repeatedly. Over and over.

The other one was in Dayton. He was — well, Heavy.com tracked down his social media, which they summarized:

He wrote on Twitter that he would happily vote for Democrat Elizabeth Warren, praised Satan, was upset about the 2016 presidential election results, and added, "I want socialism, and i'll not wait for the idiots to finally come round to understanding." The Greene County Board of Elections lists his party as "Dem."

Now go to Twitter or CNN or most any major news source, and you would have one hell of a time seeing any discussion of the guy in Dayton. Oh, and try to find someone denouncing Elizabeth Warren, outside the "right".

And yeah, I'm not mentioning either one of their names. I don't actually imagine it matters, but, you know, whatever. Their names aren't the issue. The truth is they're both more similar than they are different: socially isolated, mid-twenties, with a long history of violent and often self-destructive fantasies.

More than a hundred years ago, Emile Durkheim wrote a book called Suicide ("Le Suicide") in which he examined the causes of suicide. While only one of these two actually died, I think it applies for both.

One kind, egoistic suicide, arises out of "a prolonged sense of not belonging, of not being integrated in a community."  Another, anomic suicide, results from "an individual's moral confusion and lack of social direction,..." Durkheim suggests it's characterized by a "state of moral disorder where people do not know the limits on their desires and are constantly in a state of disappointment."

Durkheim's explanations have an economic and seemingly Marxist aspect that I don't find convincing — maybe it made more sense in 19th-century France. But a "prolonged sense of not belonging" and "constantly in a state of disappointment" sure seem to be on the button.

The truth is, no general theory about human behavior is likely to be 100 percent convincing. And picking out a few little points from one — or the other! — is probably looking at accidental aspects of the problem, not the essential ones.

The results of these accidental experiments seem to come down to two things:

Oh, and there is one other conclusion I think we can draw: if someone is trying to sell something, you can be pretty sure what is it by what they're emphasizing. If people are emphasizing El Paso over Dayton, it's not mass shootings that are their primary concern.