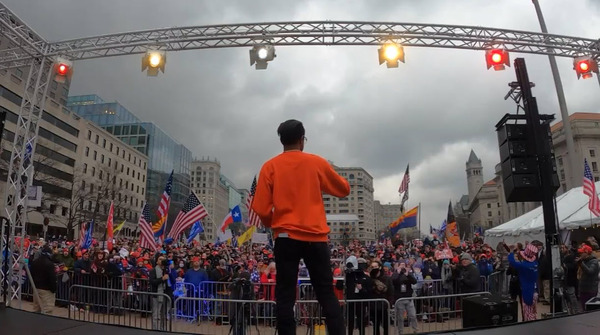 Image: It was a peaceful protest. Patriot Purge screen grab.

I saw Tucker Carlson’s Patriot Purge (all three parts) for free on RoxyTube yesterday along with 175 others. (That’s right only 175 people were watching it then.) There is a lot to recommend. Indeed, everyone should see it and determine for themselves if Tucker has raised relevant issues as to whether there was an “insurrection” on January 6 at the U.S. Capitol or not.

Most of you who read American Thinker know that Tucker set out to tell the truth. For reasons discussed below, he may not yet have the complete truth, but there are numerous markers he reveals that suggest what may have happened.

Tucker has lots of video footage of the events of January 6. After the Trump rally, thousands walked down the Mall to the Capitol. They thought they were exercising their Constitutional right to demonstrate in favor of Trump. Many thought that Mike Pence had the power to invalidate electoral votes from questionable states as a result of fraudulent voting and throw the Presidential contest into the House Of Representatives to be resolved. They thought that, by being near the Capitol, they could stiffen Pence’s backbone. There was no plan to enter the Capitol.

When the crowd arrived at the Capitol there were people with bullhorns urging the crowd to enter the Capitol and express their views. It is highly unlikely that these were Trump supporters. If not, who were they representing? Could they have been FBI, BLM. or ANTIFA, or any of a host of other organizations that wanted to frame Trump?

It is interesting to view the videos that Tucker puts up. On the one hand, a few very strong people were scaling the walls as though there was an assault in progress ala Pont du Hoc in Normandy. At the same time, everybody else was being ushered into the Capitol by merely walking up the steps, where the Capitol Police ushered them in.

Come on in, they were told. Just don’t do any damage. In fact, there was little damage. Trump supporters don’t do damage. I can only assume that those scaling the walls were not Trump supporters, but those who wanted to create a lasting visual of an assault.

When the citizens entered the Capitol our brave members of Congress were told to hide. They did. Not one member of Congress came out to greet their fellow citizens.

A horrifying episode is the video of Ashli Babbitt being shot after putting her hands on a window into the Speakers Lobby. There is no warning. She is unarmed. She is not attacking anyone. An eyewitness journalist reports all this. Nothing then or now explains why she was shot. You see her on the floor bleeding to death. You hear her mother lament her loss unable to understand what happened.

After January 6, Tucker tells us that the FBI mounted the greatest manhunt in the history of the U.S. to capture and prosecute 630 citizens who were possibly entrapped mainly into trespassing. They knocked doors down and terrified families with shock and awe. Tucker claims they wanted to emulate our Iraq experience. Those who likely did the entrapping have not been prosecuted.

Hundreds of January 6 trespassers have been held in the D.C. jail for months on end without either bail or a trial, and they experience gulag-like political punishment. One who is out on bail describes the horrors of the DC gulag—beatings and inhuman conditions are rampant. The prosecutors and judges in D.C. are adamant that these people are domestic terrorists—yet there is no evidence to support this. How are the jailers allowed to continue to abuse Trump supporters?

Tucker makes a strong case that half the country and most all of D.C. have gone mad. This ties in with Tucker’s earlier historical listing of hysterias throughout the ages—witch trials, heretic trials, pogroms, and so forth.

There is a House Select Committee to Investigate the January 6th Attack on the United States Capitol. “Attack” in the committee’s name seems to imply that it’s already passed judgment. Censorship of committee members also suggests the committee has already arrived at its conclusion.

If you read some of the documents the committee released, it is obvious that its entirely anti-Trump membership has already made up its mind that Trump supporters are domestic terrorists and that Trump instigated the “insurrection.” The committee has asked for all relevant information regarding January 6. Ask this: Will the committee watch Patriot Purge?

The main flaw in the documentary is something over which Tucker had no control: I don’t believe he had access to those members of the government who could have provided more details on what happened.

Obviously, the FBI was not available. The FBI has a long history of being a police force unto itself, able to act without consequences. This extends back to J. Edgar Hoover’s blackmailing presidents. It has continued thru Ruby Ridge, Waco, and right to the present. Does anyone believe that the FBI is a national treasure and that we couldn’t do without it?

The FBI has an agenda that doesn’t necessarily support a constitutional republic with checks and balances and a rule of law under which all are treated equally. Agents specialize in early morning arrest raids that are totally unnecessary and in infiltrating innocuous organizations and then leading them into illegal activities.

The basic rule for anyone who is paying attention is that you never answer questions from the FBI. They are very good at entrapment, as we know from what happened to Michael Flynn.

But the FBI is only one branch of the federal police. How many federal police are there? Almost every federal agency has its own police. Bureau of Land Management, Customs, IRS (adding thousands of agents to attack conservative tax filings), EPA, FDA, Secret Service, Federal Marshals, Capital Police (which now has set up new operations outside of D.C.), Interior Department, Border Police (which now waves anyone across the border), DEA, CIA, Transportation, National Park Police, and on and on, not to mention secret government organizations.

And don’t forget the National Guard deployed from all over the country to “protect” the Capitol from further domestic terror attack after January 6. Exactly where the threat came from no one knows since no evidence has ever been presented that there was a viable threat. The total number of Federal Police we know about is greater than 100,000 not counting support staff. With support staff, it’s around the size of the Marines. This might tell you something about how afraid DC is of ordinary citizens who must be kept under control. But Tucker couldn’t get information from any of them.

Julie Kelly would have provided an interesting interview for Patriot Purge regarding who really are the most dangerous people in DC—a few hundred mainly peaceful and older trespassers for a few hours on January 6 or the everyday crowd in Congress. She could explain, as she did here, that the D.C. in-crowd is the most dangerous given its utter contempt for fellow citizens, enactment of legislation detrimental to the country, and wild spending coupled with excessive taxation on an ongoing basis.

Take the time, as I did, to watch the documentary (which is also available for free at TuckerCarlson.com)—and then contemplate how much more Tucker could have shown if our government was transparent about the events of January 6.