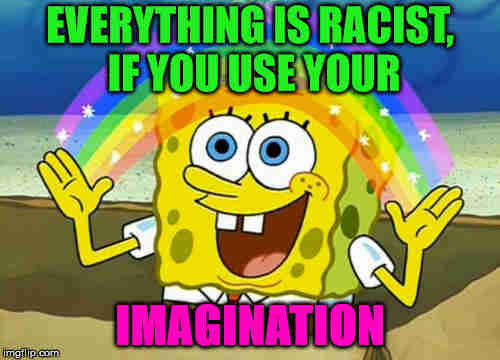 I was watching, SpongeBob SquarePants, on Nickelodeon with my 3-year-old son yesterday, and during one of the commercial breaks, they ran a public service announcement featuring an African-America adolescent describing his life living in America. He said:

"As a young child in America, I lost a lot of innocence earlier than I wanted to. I have experienced mostly micro-aggressions in my life. It feels like there’s always different people watching me whether it be police officers, or it feels like regular people looking at me in a different way because of the color of my skin. I can feel they are assuming I’m doing something wrong, or I’m up to no good. I would love to see a country where we have unity, where people can be themselves and embrace who they are, without being put down in society. My vision is fairness. What’s yours?”

This is the racist poison that is being fed to our children in the name of anti-racism. My son simply wanted to watch SpongeBob; he didn’t want to be indoctrinated in far-left racist lies. Everything that the young man in the commercial said which he believes proves that America is racist comes, by his own admission, from his assumptions of other people, based on the way they look, or what job they have. He didn’t give examples of racist acts or words that were targeted at him. He accused people he doesn’t know, who he never spoke to of thought crimes he assumed they committed. He said cops, and “regular people”, which we were to infer are white people, looked at him a certain way, and he then felt they were prejudging him by how he looked.

The racism he is feeling is coming from inside himself, his prejudices and biases towards people who are different from him. He sees a white person or a police officer look at him, and he assumes he knows that they are thinking racist thoughts. This is not an interpretation of his feelings based on his looks, but based on what he said, and admitted to. He sees a white person look at him, and he assumes that person must be racist, and prejudging him. There is no way for him to know what the person was actually thinking, if the person didn’t say or do anything to him other than look at him.

He is doing exactly what he is accusing these people of doing. He is assuming that white people and cops are prejudging him based on how he looks because he is prejudging them based on how they look. If a white woman accused a black man of wanting to rape her because he looked at her, we would rightfully conclude she was racist, prejudging the man by his skin color, but this black person is making accusations about the thoughts of white people and cops based solely because they looked at him. It’s as equally racist. But his racism is being promoted by networks like Nickelodeon to our children.

This young man harbors many internal biases and prejudices towards white people and police officers because our society is inundated by false narratives pushed by the media and the left that black people are targets by whites and cops. NBA superstar, LeBron James once tweeted, “We’re literally hunted EVERYDAY/EVERYTIME we step foot outside the comfort of our homes!” News organizations like CNN accuse police officers of unfairly targeting blacks. These types of false accusations are promoted and accepted in our society which poisons the minds of our youth, even though statistically speaking whites and cops are not the predominant threat to black people. A black person is 10.5 times more likely to be killed by another black person, then by a white person. And an unarmed black person is 184 times more likely to be killed by a black person than by a police officer.

At the end of the commercial, the young man claims that he wants to promote unity, but everything he said promotes more division. He makes false accusations against people of different colors, and different professions based on no tangible evidence, based solely on his own internal feelings that he projects on people who look different than he does. The sad and dangerous part in all this is that people like this young man cannot see their own inherent biases while they are calling out the inherent biases of other people who do not look like they do.

If he wants to know why the country is still so divided by race, he should look at himself in the mirror, and address his own prejudices, and his own biases toward other races. Because that is what jumps out from the commercial. I don’t want to be too harsh on this young man, because he is being used as a prop by people on the far left to push their agenda. Most likely he did not write the words he said. He just read words that someone else wrote for him, exploiting his age and race to push their destructive agenda. These types of tactics are dangerous, and driving a wedge through our country, preventing the racial harmony they intended to achieve. We can only live in a post-racial society when we decide to look beyond race, and into the hearts and souls of our fellow human beings which we can never do when we are so laser-focused on race.