By Discover The Networks 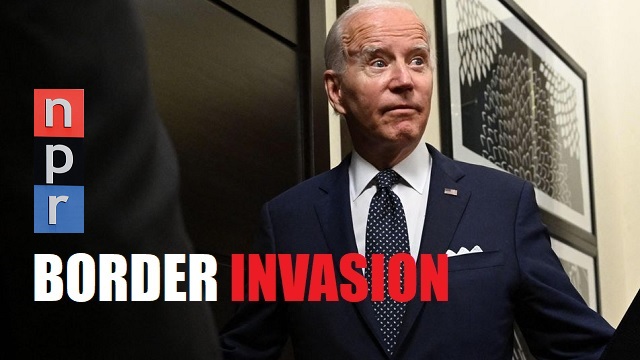 Fifty-four percent of all respondents believe the term “invasion” is valid; that includes 76 percent of Republicans, 46 percent of independents, and even 40 percent of Democrats.

A mere 19 percent of all respondents — less than one in five — said the term is false.

The open-borders fanatics at NPR lamented the results from Ipsos, the polling firm, saying:

Republican leaders are increasingly framing the situation as an “invasion.” Immigrant advocates say the word has a long history in white nationalist circles, and warn that such extreme rhetoric could provoke more violence against immigrants.

Still, the polling shows that the word “invasion” has been embraced by a wide range of Americans to describe what’s happening at the border

“We are not actually screening enough people to make it safe for the rest of the country,” said poll respondent Michael Cisternino, a Republican from Nevada, in a follow-up interview. “We, the people of the United States, really don’t have control over who’s coming in, and where they’re going or what they’re going to do when they get there — if they’re criminals, if they’re not criminals.”

The Left always tries to smear any opposition to their agenda as “white nationalist,” but in fact there is a literal invasion at our southern border, and the Democrats have invited it. This is not “extreme rhetoric” but a demonstrably valid description of the border crisis.

The Ipsos poll may even have understated the public’s view of Biden’s migration as an “invasion,” because many respondents claimed ignorance or hid their views. For example, 36 percent of independents and 25 percent of Democrats said they “Don’t know” when asked about the term “invasion.”

NPR is a radio landscape crowded with liberal and leftist voices but nearly devoid of conservative hosts and anchors. In one of its most infamous moves, NPR in May 1994 announced its plan to air prison-life commentaries by convicted cop-killer (and former Black Panther) Mumia Abu-Jamal, a cause celebre of the academic left. Public outcry prompted cancellation of Abu-Jamal’s program.

Over the course of NPR’s history, some of its broadcasts have made big headlines with their incendiary anti-conservative rhetoric. In July 1995, for instance, after Republican Senator Jesse Helms had stated that the federal government was spending too much money on AIDS research, NPR’s legal-affairs correspondent Nina Totenberg said: “I think he [Helms] ought to be worried about what’s going on in the Good Lord’s mind, because if there is retributive justice, he’ll get AIDS from a transfusion, or one of his grandchildren will get it.”

In November 2009, the NPR website featured an animated video disparaging the Tea Party movement by teaching readers how “to speak Tea Bag.”