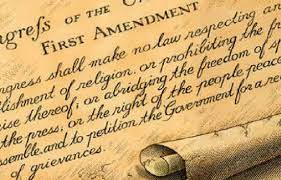 The First Amendment says that “Congress shall make no law respecting an establishment of religion, or prohibiting the free exercise thereof,” but make no mistake: we do have an established religion in the United States today. It’s woke Leftism.

Wokeism, including sexual confusion, contempt for masculinity, erasure of femininity, obsession with racism real and imagined (mostly the latter), is the religion that the U.S. government backs and fosters today. There are pride flags at U.S. embassies around the world, openly “gender fluid” and transgender government officials, and fulsome praise for Leftist societal and sexual fads from officials at the highest levels, including the president of the United States himself. It became clear during the presidential administration of Joe Biden that establishment, like religion itself, is inescapable: just as individuals who insist that they are atheists have some central focus and guiding force and principle in their lives, that is, something that takes the place and serves the purpose of a religion, so governments will endorse and even impose certain values.

This new policy required schools that received federal funding for lunch programs to endorse and promote the transgenderism, including allowing biological men to use women’s bathrooms. If any school refused to comply, it would be denied federal funds.

This Agriculture Department decree was just one example of a myriad of ways in which Biden’s handlers were pushing the woke agenda upon the American people. On June 15, 2022, Biden signed what his administration called an “historic executive order” that was designed to aid in “advancing LGTBQI+ equality during Pride Month.” The White House press office stated proudly: “President Biden believes that no one should face discrimination because of who they are or whom they love. Since President Biden took office, he has championed the rights of LGBTQI+ Americans and people around the world, accelerating the march towards full equality.” To this end, the White House announced plans to end “conversion therapy,” that is, efforts to convince young people not to be homosexual, or even to convince those suffering gender confusion that they should not seek to alter themselves through surgery and pharmaceuticals so that they could pretend to be a member of the opposite sex.

“As a candidate,” the White House said, “President Biden pledged to help end so-called ‘conversion therapy’ – a discredited and dangerous practice that seeks to suppress or change the sexual orientation or gender identity of LGBTQI+ people. Today, President Biden is using his executive authority to launch an initiative to protect children across America and crack down on this harmful practice, which every major medical association in the United States has condemned.” This opened the possibility that those who tried to fight the prevailing gender fantasy and madness could face criminal prosecution.

Joe Biden, or the shadowy figures who were actually making the decisions in his administration, was establishing a religion for his people: rewarding the orthodox and punishing the heretical and their institutions in ways that would make the heresy less appealing and put it on the road to extinction. The most obvious difference, of course, is that Biden’s Leftism isn’t generally recognized as a religion, although it very much is one, as can be seen all over, for instance in the transgender pronoun fantasies and hunt for heretics who dare to “misgender” a particular fantasist, and the fervor with which supporters of abortion vowed to fight against all restrictions to the practice after Roe v. Wade was overturned.

But since this secular ideology is not understood to be a religion, it is not seen as an established creed in violation of the First Amendment, as it would be in a sane polity. If it were, then the solution to it would also be found in the First Amendment, in the prohibition of such an establishment, and provisions such as school lunch money being withheld from schools that refused to indulge insane gender faddism would be seen as establishing a religion, and accordingly ended. But don’t watch for that to happen here.