BY FLORIDA US CONGRESSMAN VERN BUCHANAN

President Biden's $500 billion student loan giveaway is a nothing more than an election-year ploy to curry favor with our country's top earners and most highly educated grads at the expense of those who made the hard decisions and played by the rules.

When you look at who actually has student loans, the contrast is stark:

Under Biden's plan, that means plumbers are footing the bill for professors.

Worse, the president doesn’t even have the authority to wholesale wipeout loan debt, as he and Speaker Pelosi have even noted previously!

So much for the separation of powers.

That’s why I cosponsored the Student Loan Accountability Act which ensures that the secretary of education cannot unilaterally cancel student loans.

Read the editorial from the Wall Street Journal below and let your representatives in Congress know if you agree – taxpayers shouldn’t have to foot this $500 billion behemoth! 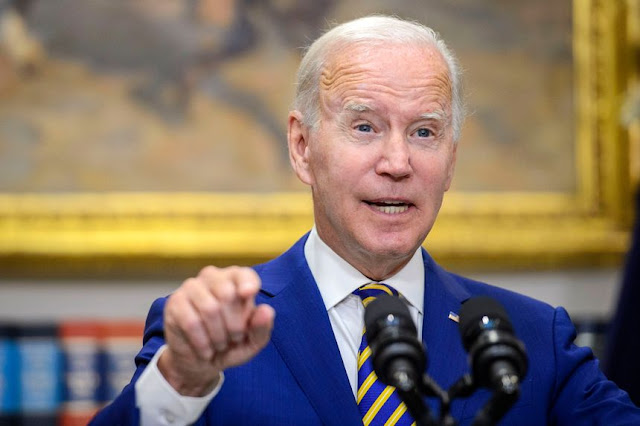 President Joe Biden announces a federal student loan relief plan that includes forgiving up to $20,000 for some borrowers and extending the payment freeze at the White House on Aug. 24.- PHOTO: BONNIE CASH - POOL VIA CNP/ZUMA PRESS

Well, he did it. Waving his baronial wand, President Biden on Wednesday canceled student debt for some 40 million borrowers on no authority but his own. This is easily the worst domestic decision of his Presidency and makes chumps of Congress and every American who repaid loans or didn’t go to college.

The President who never says no to the left did their bidding again with this act of executive law-making, er, breaking. The government will cancel $10,000 for borrowers making less than $125,000 a year and $20,000 for those who received Pell grants. The Administration estimates that about 27 million will be eligible for up to $20,000 in forgiveness, and some 20 million will see their balances erased.

But there’s much more. Mr. Biden is also extending loan forbearance for another four months even as unemployment among college grads is at a near record low 2%. Congress’s Cares Act deferred payments and waived interest through September 2020, but Donald Trump and Joe Biden have extended the pause for what will now be nearly three years.

The Administration is claiming, again, that this will be the last extension and is needed to help borrowers prepare to resume payments. But even if the Administration lets the forbearance end in December, about half of borrowers won’t have to make payments since their debt will be canceled.

Most of the rest will only make de minimis payments because Mr. Biden is also sweetening the income-based repayment plans that Barack Obama expanded by fiat. Borrowers currently pay only up to 10% of discretionary income each month and can discharge their remaining debt after 20 years (10 if they work in “public service”).

Democrats said these plans would reduce defaults. They haven’t. Federal student debt has ballooned because many borrowers don’t make enough to cover interest and principal payments, so their balances expand. Student debt has nearly doubled since 2011 to $1.6 trillion, though the number of borrowers has increased by only 18%.

Now Mr. Biden is cutting undergrad payments to a mere 5% of discretionary income. The government will also cover unpaid monthly interest for borrowers so their balances won’t grow even if they aren’t paying a penny. This will mask the cost to taxpayers of the Administration's rolling loan write-off. Student-loan debt won’t appear to swell even as it does. What a fabulous accounting trick.

The Penn Wharton Budget Model estimates that canceling $10,000 for borrowers earning up to $125,000 will cost about $300 billion. The Pell grant addition could increase this by as much as $270 billion. The four-month freeze on payments will cost $20 billion on top of the roughly $115 billion it already has.

The payment plan revisions could eventually add hundreds of billions of dollars more. An analysis commissioned by the Trump Education Department estimated that taxpayers would lose $435 billion on federal student loans, largely because borrowers in these payment plans on average were expected to repay only half of their balances. Now they will repay even less.

Worse than the cost is the moral hazard and awful precedent this sets. Those who will pay for this write-off are the tens of millions of Americans who didn’t go to college, or repaid their debt, or skimped and saved to pay for college, or chose lower-cost schools to avoid a debt trap. This is a college graduate bailout paid for by plumbers and FedEx drivers.

Colleges will also capitalize by raising tuition to capture the write-off windfall. A White House fact sheet hilariously says that colleges will “have an obligation to keep prices reasonable and ensure borrowers get value for their investments, not debt they cannot afford.” Only a fool could believe colleges will do this.

It’s important to appreciate that there has never been an executive action of this costly magnitude in peacetime. Not Mr. Obama’s immigration amnesties, not his Clean Power Plan, not Mr. Trump’s border-wall fund diversion. Nothing comes close to this half-trillion-dollar or more executive coup.

Congress authorized none of Mr. Biden’s loan relief and appropriated no funds for it. Progressives say the Higher Education Act of 1965 lets the Education Secretary “compromise” (i.e., modify) student debt. But the Federal Claims Collection Act of 1966 sets very limited terms and strict procedures for such “compromise.”

Even Mr. Biden said in December 2020 it was “pretty questionable” whether he had authority to cancel debt this way. The Supreme Court recently underscored in West Virginia v. EPA that Congress must provide clear authorization to agencies taking action on major questions. Canceling so much debt is beyond major to a mega-ultra-super question.

With the cancellation precedent, progressives will return to this vote-buying exercise every election year. The only antidote will be if Democrats conclude this gambit boomeranged politically by mobilizing an opposition coalition of Americans who are tired of being played for saps by progressives. The test arrives in November.