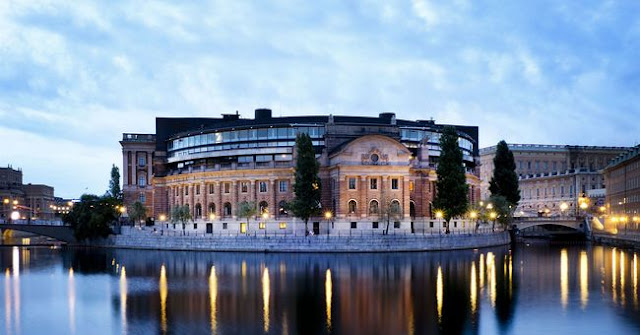 2020 has been a year of firsts: the world faced its first (modern) pandemic, killing hundreds of thousands and shuttering vast swathes of the global economy. Along the way, the political world was turned upside down: for the first time in living memory, leftists found themselves castigating, rather than idolizing, socialist Sweden.

The reason? The Swedes, hard-headed contrarians that they are, had the temerity to buck the global fad for strict lockdowns and obsessive masking. They reasoned that such measures would be unsustainable, economically and socially, so instead of shutting businesses and schools, and harassing or fining anyone caught in public without a mask, they advised people to practice sensible social distancing and to avoid unnecessary outings and exposure.

At first, the mainstream media throughout the Western world gleefully reported the high death rate that Sweden's mild model of pandemic control produced, especially among the elderly and nursing home residents. Sweden's “experiment” with liberty (never a concept beloved of left-wingers) had failed, or so it seemed.

Now, though, Sweden's light touch with respect to coronavirus countermeasures is looking sounder and sounder. Sweden's numbers of new infections are low and trending lower. Daily deaths are approaching the vanishing point. There is speculation that, because the disease was allowed to spread more freely among those least vulnerable, Swedes may already benefit from a degree of herd immunity.

Sweden's successes don't end there, however. The toll of the pandemic, while it is often measured in raw numbers of "COVID deaths," stretches far beyond mortality. Among the worst aspects of the crisis has been the economic carnage it has visited on the worst affected countries. In the U.S., second-quarter GDP is down by almost 33 percent! Unemployment peaked at almost 15 percent. These are numbers generally associated with a depression, although economists expect that the downturn, sharp as it is, will be brief.

Sweden, meanwhile, was the only country in Europe in the first quarter of 2020 to see its GDP rise. Sweden's overall economic contraction in 2020 is expected to be modest, compared to the EU as a whole and to badly-hit countries like the U.K., Italy, and Spain. Swedish companies are also outperforming expectations, while Swedish unemployment is lower than ours: most recently, it stands at 9.2 percent.

Lest we forget, economic pain (and the limitation thereof) also correlates to many other factors that govern a country's degree of suffering during the pandemic. Poor economic performance can and usually does foster a rise in suicides, violent crime, drug use, alcohol abuse, domestic disputes, child abuse, as well as anxiety and depression. Moreover, long and rigid lockdowns, combined with scaremongering in the news media, can even produce more sickness and death, because many people in need of urgent medical care choose to defer it, assuming that it is too dangerous to leave their homes. We can safely assume that all of these problems are less pronounced in Sweden, given the tempered nature of its pandemic response, and the shallowness of its virus-related recession.

There are many ways to measure a country's performance in the midst of the coronavirus pandemic, but surely the simplest is this: has a given nation managed to minimize the “pain” (and death) afflicting its citizens while maximizing the “gain” they seek in terms of employment, economic activity, and the preservation of their freedoms and quality of life?

Sweden, it would appear, has struck this balance remarkably well. After a rocky start, especially in nursing homes, Swedish authorities have managed to wrestle the virus into submission, such that it is now almost unheard of for Swedes to die of COVID-19. Simultaneously, Swedes are going to work, going to school, visiting restaurants and businesses, and enjoying normal human interactions without the constant need to wear facemasks.

That sounds, to a mere layman, like a story of success, not failure. And, if the “socialist Swedes” have found a pandemic strategy that works, we have to ask: why are their “progressive” allies around the world afraid to admit it?