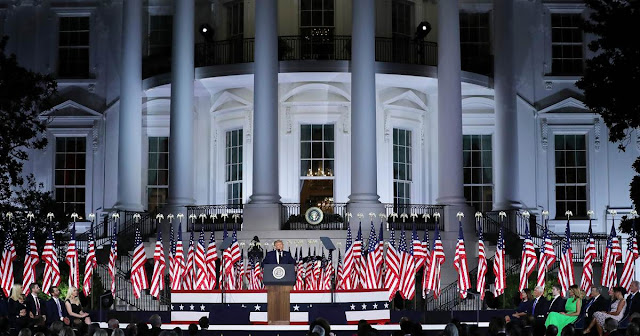 President Donald Trump: "My fellow Americans, tonight with a heart full of gratitude and boundless optimism, I profoundly accept this nomination for President of the United States." 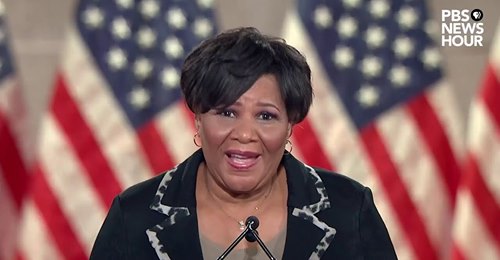 Alice Johnson, who had her life sentence for drug charges commuted by President Donald Trump in 2018, spoke on the final night of the Republican National Convention on Aug. 27, 2020. 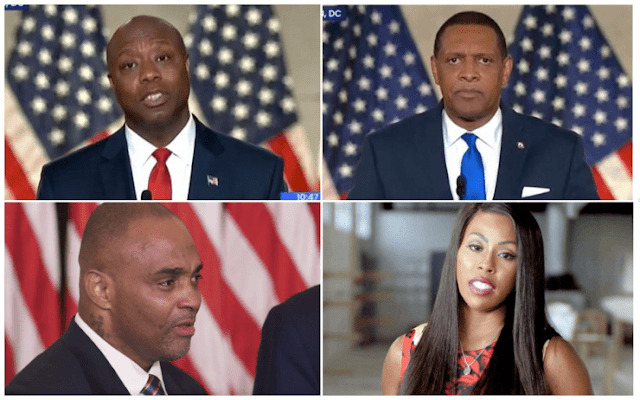 If Kim Klacik were a Democrat, she would be the talk of the town. An inspiring, energetic, fresh face on the political scene who has produced one of the best political ads in memory. Instead, her talk at the Republican convention was ignored by the press, which thought the biggest story coming out of the GOP meeting was that biased “fact checkers” (who were apparently on a week-long vacation during the Democrats’ convention) were able to come up with a long list of things they could complain about.

There’s a good reason for the media to ignore Klacik. Her message. It’s simple and direct: “Joe Biden believes we can’t think for ourselves, that the color of someone’s skin dictates their political views. We’re not buying the lies anymore.”

In her campaign ad, she is seen walking through burned out, decrepit Baltimore neighborhoods while reminding viewers that Democrats have run the city for five decades.

Other minority speakers echoed this message in the first two nights of the convention — that Democrats don’t care about black people, just their votes. Several quoted Biden’s comments about blacks being monolithic and how they “ain’t black” if they support Trump. They talked about Trump’s justice reform bill and his support for Historically Black Colleges and Universities — something few Americans probably know anything about.

“The Democratic Party does not want black people to leave the mental plantation they’ve had us on for decades.”

He went on to say: “But I have news for them: We are free people with free minds. I am part of a large and growing segment of the black community who are independent thinkers. And we believe that Donald Trump is the president that America needs to lead us forward.”

Jones added that Trump “delivered historic funding to HBCUs and he guaranteed it for 10 years. Something that has never happened in the history of this country. That gave our HBCUs stability, the chance to grow and produce the next generation of black leaders. That’s right. Donald Trump did that.”

Jones was a dramatic contrast to the doddering, old and almost entirely white group of Republicans that Biden was able to seduce to his convention. Where was the fawning press coverage about how brave Jones was to suffer vicious attacks and cross the aisle for something he believes in? Tell us if you find such a story.

The New York Times, in fact, dismissed Jones as “one of several people of color the Trump campaign highlighted on Monday, as the Republican Party tried to portray itself as inclusive.”

The Daily Beast stated plainly what the Times tried to finesse: “No GOP event would be complete without token minorities to absolve the party of its race-baiting and appeals to white grievance.”

Also on the first night, South Carolina Sen. Tim Scott attacked Biden over criminal justice, saying that “In 1994, Biden led the charge on a crime bill that put millions of black Americans behind bars. President Trump’s criminal justice reform law fixed many of the disparities Biden created and made our system more fair and just for all Americans.”

That bill, the First Step Act, was a huge legislative win that even former Obama administration official Van Jones said Trump deserved credit for getting enacted.

“We’ve got to give Trump credit where credit is due,” he said. “He did fight hard to pass the bill and he made it possible for other Republicans to also be in the pro-criminal justice camp.”

“I take it as a personal insult that people would think I’ve had a 37-year friendship with a racist.”

Walker said that “growing up in the Deep South, I’ve seen racism up close. I know what it is and it isn’t Donald Trump.”

Nikki Haley — whom CNN contributor Leslie Marshall called a “white woman,” even though both of her parents are Indian immigrants — directly attacked the Democrats’ America-is-racist meme.

“In much of the Democratic Party, it’s now fashionable to say that America is racist,” Haley said. “That is a lie. America is not a racist country. The American people know we can do better. And of course we value and respect every black life.”

Marshall, by the way, later deleted her tweet, pathetically blaming “staff and interns” for writing it.

Then there was Daniel Cameron, the first black attorney general in Kentucky’s history, who spoke at the convention on Tuesday night.

“I think about my ancestors who struggled for freedom. And as I think of those giants and their broad shoulders, I also think about Joe Biden, who says, if you aren’t voting for me you ain’t black. Who argued that Republicans would put us ‘back in chains.’ Who says there is no ‘diversity’ of though in the black community,” Cameron said.

“Mr. Vice President, look at me, I am black. We are not all the same, sir. I am not in chains. My mind is my own. And you can’t tell me how to vote because of the color of my skin.”

Ouch. No wonder the press decided to spend its time picking nits about whether Trump deserves credit for the historically low black unemployment rate before the COVID-19 lockdowns.

Trump also used the convention to pardon Jon Ponder, a black man who had served a five-year prison sentence for bank robbery, whom Trump met at the 2018 National Day of Prayer celebration.

Does Team Trump know something that the press is also ignoring: Namely, that he has an opportunity to win black support that Biden desperately needs to win?

Well, consider the material that Biden has given Trump.

‘If you have a problem figuring out whether you’re for me or Trump, then you ain’t black.’

‘Unlike the African-American community, with notable exceptions, the Latino community is an incredibly diverse community with incredibly different attitudes about different things.’
‘Poor kids are just as bright and talented as white kids.’

‘I mean, you got the first mainstream African-American (referring to then Sen. Barack Obama) who is articulate and bright and clean and a nice-looking guy. I mean, that’s a storybook, man.’

A Republican who said these things would be branded as racist for life.

If Trump does manage to bring more black voters to his side, the press will act shocked and dumfounded. No one else should be.