The Elites Fiddle While America Burns 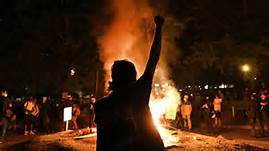 The Great 2020 Meltdown has exposed the rottenness of our political and corporate establishments.

The most intolerable irony of the past few miserable months has been listening to our self-appointed moral leaders lecture us on the nation’s irredeemable sinfulness from the comfort of their own secure, well-upholstered positions, while we endure daily the urban nightmare of a world created by their political allies.

As our cultural, media and corporate chiefs deliver their social and political wisdom from their redoubts in New York’s Hamptons, Palm Beach, Fla., and the greener pastures of the San Francisco Bay Area, America’s cities have been ravaged by successive predations of lockdown, disorder and violence.

For cities like New York, Chicago, Minneapolis, Seattle and Portland, Ore., the damage done by this indulgent summer of insanity may never be repaired. For decades these cities have been controlled by monolithic Democratic establishments—though Republican mayors proved they could govern New York. They have milked the more dynamic parts of their populations to feed their own ideological agenda while doing nothing to lift the least advantaged out of misery.

The Great Meltdown of 2020 has exposed how rotten these urban establishments have become.

The lockdown, that soul-crushing exercise in economic suicide, imposed and enforced largely by the people it least affects, has permanently demolished vast elements of the economic base of these cities: businesses that will never return, employees who have moved away or will work from home rather than tolerate the increasingly perilous lottery of commuting and working in a deteriorating urban environment.

Adding to the injury were weeks of unrestrained, anarchic unrest, with whole parts of cities burned and blighted, with the willing connivance, even encouragement, of authority.

Then, as Democratic mayors actively encouraged an all-out assault on city police forces, a terrifying wave of violence and crime swept the cities. In Chicago last month murder rose 139% over a year earlier. New York had more shootings in the first seven months of 2020 than in all of 2019. The victims of these crimes are almost never the vocal elites, safe in their well-protected homes and offices. They are the poorest and least secure of our neighbors.

Meanwhile, political leaders—backed with money and words from their business allies—have responded with an elaborate performative exercise that has nothing to offer the daily reality but is designed to redraw the boundaries of our free thought. So, for example, those of us who stayed in New York this summer weren’t permitted to worship in church, but we were allowed—we were more or less instructed—to worship at the feet of those who preach hatred of the police, racial strife and white self-loathing. Friends weren’t permitted to attend parents’ funerals, but the right people were free to travel across state lines to attend multiple funerals for political and public show.

If you think irony is dead you had only to observe Bill de Blasio, New York’s mayor, posing for pictures as he painted “Black Lives Matter” on America’s most famous shopping street, while a few miles away his city resonated to the sound of gunfire and the anguished cries of families of children murdered in broad daylight.

This is what modern leadership looks like: a morality play that treats us all like recalcitrant children, even as the cities we helped build implode around us.

Whatever the political consequences of this unprecedented summer, there will be hefty costs, and they won’t be borne by those responsible. As cities are further hollowed out by crime and decay, taxes will rise, further stifling investment and growth, further harming the most disadvantaged, and accelerating a vicious circle of decline.

It’s a needless tragedy engineered by ideologues that is sending into sharp reverse the gains made in large American cities in the early years of the 21st century.
Already between 2015 and 2019, migration away from America’ largest cities had accelerated. That was largely an economic phenomenon, as rising taxes and the possibilities of technology drove people away. City leaders are now re-creating the social conditions that ruined these cities in the 1960s and ’70s: violent crime; urban blight, crumbling infrastructure. And they’ve added to that list schools run by unions dedicated to radical ideology and the mob in control of the streets in furtherance of an intolerant political agenda.

Worst of all, now we have a corporate elite, safely sequestered from the consequences of all this ruin, loudly helping it along by signaling their own virtue and denouncing our supposed vice.

https://www.wsj.com/articles/the-elites-fiddle-while-america-burns-11596470035?mod=opinion_featst_pos1
Posted by Frances Rice at 11:10 AM