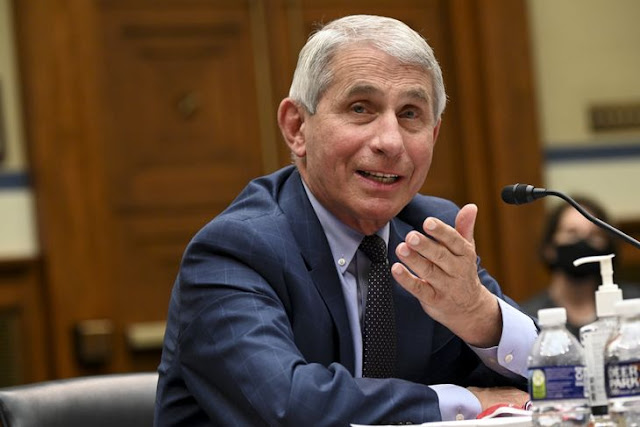 During a House Judiciary Committee hearing on Friday, Rep. Jim Jordan (R-Ohio) pressed Dr. Anthony Fauci on whether the government should restrict the massive Black Lives Matter protests across the country in order to slow the spread of the coronavirus. Fauci admitted that crowds full of people not wearing masks would likely spread the virus, but he refused to say whether or not protests would do so. He also refused to make any recommendations on limiting protests, even though he had made many recommendations in the past.

At one point, Fauci even insisted that “there’s no inconsistency” in preventing people from going to work, going to church, and going to school but allowing them to gather in massive crowds to protest.

“Dr. Fauci, do protests increase the spread of the virus?” Jordan began.

Fauci said he could only make a “general statement” about crowds.

“Well, half a million protesters on June 6 alone, I’m just asking, that number of people, does it increase the spread of the virus?” Jordan pressed.

“Crowding together, particularly when you’re not wearing a mask, contributes to the spread of the virus,” Fauci responded.

“Should we limit the protesting?” Jordan pressed.

“I’m not sure what you mean,” Fauci responded.

“Should government limit the protesting?” the congressman clarified.

Fauci stuttered, “I- I- I don’t think that’s relevant to…”

“Well, you just said, it increases the spread of the virus. I’m just asking, should we limit it?” Jordan insisted.

“Well, I’m not in a position to determine what the government can do in a forceful way,” the doctor said.

Jordan noted that Fauci has made “all kinds of recommendations” on subjects such as baseball, dating on Tinder, and government-mandated lockdowns. Fauci recently said there would likely be “no need” for a second coronavirus lockdown.

When it comes to protests, however, Dr. Fauci refused to take a position. “No, I think I would leave that to people who have more of a position to do that,” he said.

“‘There’s no world in which the Constitution permits Nevada to favor Caesar’s Palace over Calvary Chapel.’ I’m just asking, is there a world where the Constitution says you can favor one First Amendment liberty, protesting, over another, practicing your faith?” Jordan asked.

“I’m not favoring anybody over anybody. I’m just making a statement that’s a broad statement. Avoid crowds of any type, no matter where you are,” Fauci insisted. “I don’t judge one crowd versus another crowd.”

Yet Jordan noted that violent riots have broken out at protests. “There’s been no violence I can see at church. I haven’t seen people at a church service go out and harm police officers and burn buildings,” he said. “But for 63 days, nine weeks, it’s been happening in Portland. One night in Chicago, 49 officers were injured.”

Jordan also noted that New Jersey cops arrested gym owners Ian Smith and Frank Trumbetti for violating a lockdown order by operating their business. “Ian Smith, Frank Trumbetti were arrested for trying to open their gym,” he said. “But my bet is if these two individuals who owned this gym were outside, just in front of their gym, and all the people who were working out in their gym had been outside protesting, they would have been just fine. But because they were in the gym working out, actually running their business, they got arrested. You think that’s okay?”

“But do you see the inconsistency?” the congressman pressed.

“So you’re allowed to protest, millions of people in one day, in crowds, yelling, screaming, but you try to run your business, you get arrested? And if you stood right outside that building and protested, you wouldn’t get arrested? You don’t see any inconsistency there?”

Fauci again dodged the question. “I don’t understand what you’re asking me,” he said, refusing to opine on “who should get arrested.”

“You’ve advocated for certain businesses to be shut down. I’m just asking your position on the protest,” Jordan insisted. “We’ve heard a lot about hair salons. I haven’t seen one hairstylist, who, between haircuts, goes out and attacks police or sets something on fire. But we’ve seen all kinds of that stuff during protests. And we know the protest actually increases the spread of the virus.”

Yet Fauci refused to even admit that protests increase eh spread of the virus. “I said crowds. I didn’t say specifically. I didn’t say protests do anything,” he insisted.

Later in the hearing, Jordan returned to the issue of consistency.

“The very first one the Founders mentioned was the right to practice your faith, but government’s putting all kinds of limits on Americans’ ability to do that, and Democrats are just fine with it,” Jordan said. ” I want consistency, that’s what I want.”

“Kids can’t go get what they need to put them on the path to achieving the American dream, but boy, they can protest,” he warned. “The ability to engage in your livelihood, the ability to have your kids get an education, the ability to practice your faith are just as important, in my mind, as protesting.”

Fauci may not have meant to encourage the disgusting inconsistency of arresting people for going to work or going to church but not for protesting, but he did say, “there’s no inconsistency, Congressman.”

Such a statement is absurd on its face. Of course, there is an inconsistency in this position. Jordan is right: gym owners, hairstylists, and parishioners do not take breaks from their business and worship just to engage in violent attacks on police officers and federal courthouses, but the Black Lives Matter protests — particularly in Portland — have provided cover for just that.

Fauci’s unwillingness to even admit that the protests would spread the coronavirus is shameful. His blanket insistence that “there’s no inconsistency” is even worse. This seems reminiscent of Fauci’s ridiculous claim that New York responded “properly” and “correctly” to the coronavirus pandemic.

Fauci needs to clarify his position — and withdraw his ridiculous statement that there is “no inconsistency” on lockdowns.

Now We Have Proof Dr. Fauci Is Full of Crap and Can’t Be Trusted