Barack Obama and His Race Card 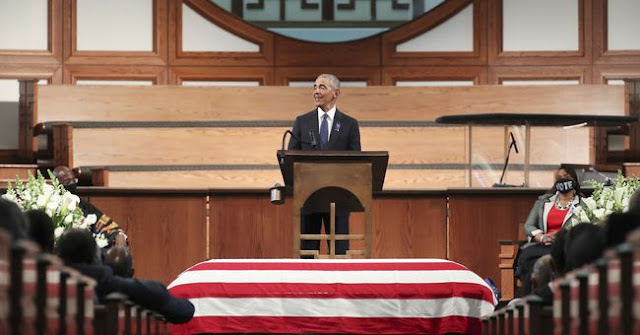 Source: Alyssa Pointer/Atlanta Journal-Constitution via A

This time at the funeral of civil rights icon John Lewis, Obama compared President Donald Trump to not one but two racial segregationists, former Birmingham, Alabama, Commissioner of Public Safety Bull Connor and former Alabama Gov. George Wallace. The inconvenient truth that Connor and Wallace were Democrats is, apparently, of no relevance to Obama, his fellow Democrats or most of the media.

About Connor, Obama said, "Bull Connor may be gone, but today we witness, with our own eyes, police officers kneeling on the necks of Black Americans." The longtime former Bronx Rep. Charles Rangel, whose district included Harlem, also employed the Republicans-are-like-Bull Connor meme. Rangel, though, used it on then-President George W. Bush, who also spoke at Lewis' funeral. In 2005, Rangel criticized Bush's response to Hurricane Katrina by saying, "George Bush is our Bull Connor."

For those who have forgotten or never knew, Connor is the segregationist Alabama lawman who, in the '60s, turned water hoses and sicced dogs on civil rights protesters. "You can never whip these birds if you don't keep you and them separate," Connor said in 1963. "I found that out in Birmingham. You've got to keep your white and the Black separate."

Yes, Obama just compared Trump to that man. Never mind that Trump signed the First Step Act that, so far, has allowed more than 3,000 inmates convicted for crack cocaine -- mostly Black men -- to have their sentences reconsidered and over 2,000 released. Never mind that Trump posthumously pardoned Jack Johnson, the first Black heavyweight champion, who was the victim of a racially motivated prosecution.

About Wallace, Obama said, "George Wallace may be gone, but we can witness our federal government sending agents to use tear gas and batons against peaceful demonstrators." In 1963, Wallace defied federal officers by literally standing in front of the door of the University of Alabama in a failed attempt to prevent the university from integrating. That same year, in his gubernatorial inaugural speech, Wallace said, "In the name of the greatest people that have ever trod this earth, I draw a line in the dust and toss the gauntlet before the feet of tyranny, and I say, segregation now, segregation tomorrow and segregation forever."

Yes, Obama just compared Trump to Wallace, the governor who tried to stop Blacks from getting an education at a public school that Blacks qualify to attend. Never mind that Trump is a proponent of school choice, allowing Black students, K-12, to take their public school dollars to whatever school they qualify for as an alternative to poor urban public schools.

Since Obama compared Trump to two dead racist Democrat segregationists of the 1960s, it is only fair to ask about Obama's relationship with two living racist anti-Semites.

During his first six years, Obama invited the anti-Semitic, race-hustling, Tawana Brawley-lying Rev. Al Sharpton to the White House 72 times by December 2014. (Any visits after that time are not available on public record.) This would be the same Sharpton who, in 1991, fueled a rage in Brooklyn's Crown Heights, which experienced several days of violent protests in which Jews were attacked by Blacks. A few days earlier, Sharpton was recorded on tape bellowing, "If the Jews want to get it on, tell them to pin their yarmulkes back and come over to my house."

As to Nation of Islam leader Louis Farrakhan, a smiling Sen. Obama, in 2005, took a photograph with America's most notorious anti-Semite -- and segregationist. ("What the Muslims Want" No. 10 on the Nation of Islam official website reads: "We believe that intermarriage or race mixing should be prohibited.") Photographer Askia Muhammad admitted that he did not show the photo to the public until 2018, after Obama left office. Asked whether the photo would have made a difference in Obama's 2008 presidential race, Muhammad said: "I insist. It absolutely would have made a difference."

If in doubt about whether the Obama-Farrakhan picture would have mattered, consider what Democratic lawyer Alan Dershowitz said after seeing the photo: "Louis Farrakhan is a virulent anti-Semite. He's called Judaism a 'gutter religion.' He's anti-American. He is a horrible, horrible human being.

"And if I had known that the President had posed smilingly with (Farrakhan) when he was a senator, I would not have campaigned for Barack Obama. It would have influenced my decision. Look, I threatened to leave the Democratic Party if Keith Ellison were elected as chairman because of his association with Farrakhan. You don't associate with a bigot. You don't associate with an anti-Semite."

Democrats, such as Obama, can "associate" with racists and bigots like Sharpton and Farrakhan and, with a straight face, denounce Trump's alleged racism and bigotry. And Obama knows that our left-wing media, of which MSNBC host Sharpton is a part, will not call him out.

Larry Elder is a bestselling author and nationally syndicated radio talk show host. His latest book, "The New Trump Standard," is available in paperback from Amazon.com and for Nook, Kindle, iBooks and GooglePlay. To find out more about Larry Elder, or become an "Elderado," visit www.LarryElder.com. Follow Larry on Twitter @LarryElder.


Comments By A Reader

A pundit pointed out “The Left controls every major institution in America. Mainstream media, academia, administrative government, Hollywood, big tech. So if 'institutional racism' really does exist, whose fault would that be?”

To win elections and gain power, Democrats engage in ugly race mongering, keeping our nation roiled in racial strife, while, hypocritically, accusing Republicans of being racist. Democrats point to impoverished black neighborhoods as justification for assailing America as being racist.

However, Democrats have run those black communities for the past 60 years and the failed socialist policies of the Democrats have devastated those neighborhoods.

As author Michael Scheuer wrote, the Democratic Party is the party of the four S's: slavery, secession, segregation and now socialism.

For additional details, see the article “Republicans And Democrats Did Not Switch Sides On Racism” at: http://blackrepublican.blogspot.com/p/the-party-of-civil-rights-by-kevin-d.html
Posted by Frances Rice at 4:25 PM