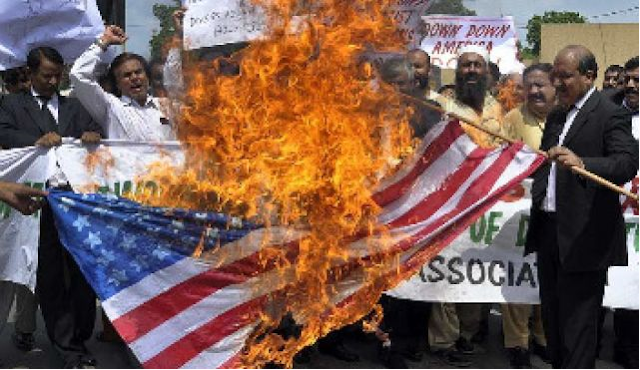 On Wednesday, December 2, 2015, two Muslim terrorists, Syed Rizwan Farook and his wife, Tashfeen Malik, walked into an afternoon Christmas party at the Inland Regional Center in San Bernardino, California, and opened fire on the assembled guests. Fourteen innocent people were killed and 22 injured. Two of the injured remain in critical condition.

Then, late in the evening of Thursday, January 7, 2016, Philadelphia police officer Jesse Hartnett was on routine patrol in his squad car at 60th & Spruce Streets in west Philadelphia. Without warning and without provocation, black Muslim Edward Archer stepped from the shadows, ran across the street, and fired 13 close-range shots at Officer Hartnett from a 9mm Glock pistol... a handgun stolen from a Philadelphia police officer in an October 2013 home burglary. Although Officer Hartnett was gravely wounded, he stepped from his vehicle and gave chase. The officer drew his sidearm and fired three shots at Archer, striking him in the buttocks. (For my Democrat readers, that means Officer Hartnett shot Archer in the ass.)

Captain James Clark, commander of the Philadelphia police homicide unit, said Archer told detectives, "I follow Allah. I pledge my allegiance to the Islamic State (ISIS). He told police investigators that he did what he did because police "defend laws that are contrary to Islam."

Moments later, newly-elected Democratic Mayor Jim Kenney stepped to the microphones and parroted to a stunned television audience what has become a standard Democrat Party talking point. He said, "In no way shape or form does anyone in this room believe that Islam or the teachings of Islam has anything to do with what you've seen on the screen. That is abhorrent. It's just terrible and it does not represent this religion in any way shape or form or any of its teachings. And this is a criminal with a stolen gun who tried to kill one of our officers. It has nothing to do with being a Muslim or following the Islamic faith."

In between those two atrocities, on December 17, 2015, seventy-three members of Congress, all Democrats, introduced House Resolution 569, subtitled, "Condemning violence, bigotry, and hateful rhetoric toward Muslims in the United States." The resolution calls upon local and federal law enforcement authorities to prosecute to the fullest extent of the law those who perpetrate "hate crimes" against-Muslims. The 73 co-sponsors of HR 569 are as follows:

The resolution reads as follows:

Whereas the victims of anti-Muslim hate crimes and rhetoric have faced physical, verbal, and emotional abuse because they were Muslims or believed to be Muslim;

Whereas the constitutional right to freedom of religious practice is a cherished United States value and violence or hate speech towards any United States community based on faith is in contravention of the nation's founding principles;

Whereas there are millions of Muslims in the United States, a community made up of many diverse beliefs and cultures, and both immigrants and native born citizens;

Whereas the Muslim community is recognized as having made innumerable contributions to the cultural and economic fabric and well-being of United States society;

Whereas hateful and intolerant acts against Muslims are contrary to the United States values of acceptance, welcoming, and fellowship with those of all faiths, beliefs, and cultures;

Whereas these acts affect not only the individual victims but also their families, communities, and the entire group whose faith or beliefs were the motivation for the act;

Whereas Muslim women who wear hijabs, headscarves, or other religious articles of clothing have been disproportionately targeted because of their religious clothing, articles, or observances, and

Whereas the rise of hateful and anti-Muslim speech, violence, and cultural ignorance plays into the false narrative spread by terrorist groups of Western hatred of Islam, and can encourage certain individuals to react in extreme and violent ways:

Now, therefore, be it Resolved, that the House of Representatives -

1. Expresses its condolences for the victims of anti-Muslim hate crimes;

2. Steadfastly confirms its dedication to the rights and dignity of all its citizens of all faiths, beliefs, and cultures;

3. Denounces in the strongest terms the increase of hate speech, intimidation, violence, vandalism, arson, and other hate crimes targeted against mosques, Muslims, or those perceived to be Muslim;

5. Declares that the civil rights and civil liberties of all United States citizens, including Muslims in the United States, should be protected and preserved;

6. Urges local and federal law enforcement authorities to work to prevent hate crimes, and to prosecute to the fullest extent of the law those perpetrators of hate crimes, and

7. Reaffirms the inalienable right of every citizen to live without fear and intimidation, and to practice their freedom of faith.

In other words, nearly four out of ten Democratic members of Congress feel as though Muslims are so terribly abused in our country... physically, verbally, and emotionally... that those of us who warn our countrymen of the danger posed by radical Islam must be deprived of our First Amendment rights. What HR 569 tells us is not that Democrats really care about Muslims, Mexicans, or any other ethnic group seeking refuge in America. They don't. What HR 569 tells us is that there are literally no limits to the pandering that Democrats will resort to in order to gain access to yet another voting constituency.

In building their national political coalition, Democrats have extended a welcoming embrace to unionized blue collar workers, teachers, and public employees; trial lawyers; radical feminists; radical environmentalists; gays; lesbians; and ethnic minorities... any identifiable special interest group seeking to gain special treatment or to avoid competition in our competitive enterprise system. The only two things that Democratic special interests share in common are their numbers and the huge sums of political money they bring to the table.

But now it appears they are throwing caution to the winds as Barack Obama, a man with strong Islamic sympathies, announces plans to import hundreds of thousands of future Democrat voters from the Muslim world. They appear to take no notice of the fact that Muslims are incapable of assimilating into western cultures. Instead, they come with sharp knives, suicide belts, and the announced intention of either killing all non-Muslims, or forcing us to convert to Islam.

Meanwhile, Democrats appear to be operating under the mistaken assumption that, when the time comes, the Muslim executioners will first separate Democrats from Republicans before proceeding with their genocidal cleansing. Although to do so is a pure death-wish, Democrats apparently see no downside whatsoever in snuggling up to Muslims who might be their friends and neighbors one day and their executioners the next... a stark reality that they will have to confront firsthand when Islamic terrorism comes to their neighborhood.

But let's not wait for the radical Islamists to deliver a moment of truth to our Democrat friends. Let's do our best to see to it that the 73 cosponsors of HR 569 are not returned to Congress in January 2017. Or better yet, let's provide each of them and their families with a year-long all-expense-paid junket to the Muslim country of their choice. They have a few things to learn.

Paul R. Hollrah is a retired government relations executive and a two-time member of the U.S. Electoral College. He currently lives and writes among the hills and lakes of northeast Oklahoma's Green Country.
Posted by Frances Rice at 9:02 AM