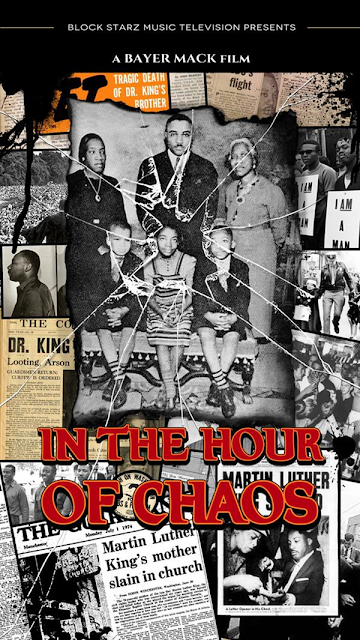 Daddy King, as Martin Luther King Jr.'s father was known, is the compelling subject of Bayer Mack's latest documentary, In the Hour of Chaos. The story sheds light on MLK Jr. but as Mack wrote in an email: "The story gives an extraordinary view of American history."

Who Was Daddy King?

Martin Luther King Sr. (1899-1984) was a Baptist pastor, leading the Ebenezer Baptist Church in Atlanta for 44 years. He was also an early leader of the civil rights movement. He served as the head of the Atlanta NAACP and the Civic and Political League, leading a fight for equality in teachers' salaries in Atlanta. He also was instrumental in helping end the Jim Crow laws in Georgia.

Martin Luther King Jr. joined him in the ministry, serving with his father at the Ebenezer Church. Daddy King was a strong influence on Martin and the entire congregation, teaching that they need not ever back down from what was right. Martin Jr. carried this message to a national and eventually an international audience.

The idea for a documentary about Daddy King was championed by executive producer Frances Presley Rice who thought King Sr.'s story held keys to a more complete understanding of not only Martin Luther King Jr., but also the civil rights movement. Documentary director and producer Bayer Mack joined her for what turned out to be a major undertaking.

In the documentary, audiences will meet Daddy King, a man of strength and compassion who lived through three heart-breaking tragedies in close succession. First there was the tragic assassination of his oldest son, Martin Jr. Then a little over a year later, his younger son, Alfred Daniel (A.D.), died in the family swimming pool in what is thought to have been an accidental drowning. Finally, a little less than five years later, his beloved wife, Alberta known as "Bunch," was killed by a gunman on a Sunday morning while she sat at her bench in front of the church organ, waiting for the service to begin.

Despite all the pain, Daddy King was able to "keep on keeping on," because he said, "The Lord's not done with me yet." And in the process, King was to continue to shape the country by lending his influence to those who would help African-Americans gain a rightful position in this country. Any politician who was seeking the African-American vote found his way to Daddy King at some point. Prominent among them was Georgia peanut farmer, Jimmy Carter, consulted Daddy King prior to his gubernatorial as well as his run for the presidency.

Among the stories told in the documentary are a few from his formative years. Born Michael King in Stockbridge, Georgia, Daddy King's personality was largely shaped by his devout mother, Delia, who was married to a sharecropper. Delia believed in a bright future for her children. Though father, James, did not attend church with them, Delia took her children with her every week. King, Sr. reported that in church he found peace, and it kept him from being bitter about the injustices he was becoming aware of.

The documentary's most telling story of this early time period concerned a day when Delia sent her young son with a bucket of milk to share with a neighbor whose cow was no longer producing milk. On his way, the young boy was stopped by a white mill owner who ordered him to immediately go and fetch a pail of water for his men. Martin was frozen at the thought of not doing as his mother asked and tried to respectfully refuse. The mill owner grabbed him by the shirt. The bucket of milk tipped over, and as Martin bent to try to stop its fall, the man kicked and then punched him before Martin could scramble away.

When Martin got home, he was terrified about what his mother would say about his failure to deliver the milk. She asked his story, and to his surprise, she took him by the hand, and the two of them returned to the mill. Delia then confronted the mill owner. When he started to come at her yelling, she caught him off balance, which permitted her to push the man over and pummel his face until his nose spurted blood.

As she stepped back, she said: "You can kill me but if you put a hand on a child of mine, you'll have to answer for it." Taking Martin's hand again, Delia and Martin returned home.

Daddy King: Doing What Is Right

From his mother, Martin learned how important it was to stand up for what was right. When he went on to become a pastor with his father-in-law at Ebenezer Baptist Church in Atlanta, it gave him a position from which he could reach out to those in power in order to make a difference. Men like Daddy King preceded the civil rights movement, and it was their work that permitted Martin Jr. to springboard to a national and international stage.

The documentary weaves strands of three stories into one. The underpinnings of the documentary are the events of the time -- everything from the Atlanta Riots and the disenfranchisement of blacks throughout the South to the era of prohibition and war time. Over this background, there are two more stories -- that of Daddy King and the story of Daddy's influence on Martin Jr.

Part One of In the Hour of Chaos can be viewed on Vimeo for $1.99, and it is currently available to subscribers of kweliTV, a documentary channel. It will also air on various local public television stations. There will be a screening in Cleveland on February 19, and Block Starz Music Television will be distributing the DVD via Amazon.

This is the second project on which Bayer Mack and Frances Presley Rice have coordinated. Previously, they produced a film of the first African-American film director, Oscar Micheaux, a contemporary of D.W. Griffith, and a very successful filmmaker in his own right: Oscar Micheaux: Czar of Black Hollywood.


http://www.huffingtonpost.com/kate-kelly/daddy-kings-story-told-in_b_9005656.html
-----
EDITORIAL NOTE FROM FRANCES RICE: A special thanks goes to co-producer Victor Young for his stellar assistance with the production of "In the Hour of Chaos."  This historically important documentary is inspired by the book by King family friend Murray Silver: "Daddy King and Me: Memories of the Forgotten Father of the Civil Rights Movement."