Behind the Scenes With Donald Trump 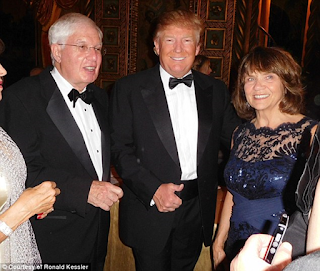 Old friends: Ronald Kessler and his wife Pamela have known Trump since 1989 when he wrote 'The Season: Inside Palm Beach and America's Richest Society.' They were among the 700 friends and club members invited to the Mar-a-Lago New Year's shindig

When Donald Trump came up with the idea of branding his condos and office buildings back in the 1980s, everyone in the real estate business thought he was nuts: traditionally, obscure companies that no one had ever heard of sold and leased real estate.

But the Trump brand came to stand for quality, prestige, and success. In the same way, Trump is branding his presidential candidacy, marketing himself by making provocative comments to get attention. Behind the scenes,

Trump is an entirely different person.

That persona was on display at his black-tie New Year's Eve party, which my wife Pamela Kessler and I attended at Mar-a-Lago, his club and Florida home in Palm Beach.

I got to know Trump and became a friend in 1989 when I wrote 'The Season: Inside Palm Beach and America's Richest Society.'

At the time, as part of the research for the book, Pam and I flew with Donald down to Palm Beach on his plane and spent the weekend with him at Mar-a-Lago. On the way down, Trump imitated the nasal, constricted tones of members of Palm's Beach WASP Old Guard who condemned his club because it admitted blacks and Jews.

To this day, there are clubs in Palm Beach that will not admit minorities as members.

We sat in on a meeting Trump had with his lawyers and architects. He would take a black felt pen and indicate on architectural plans where he wanted a window or a doorway in his new ballroom, which he called a pavilion to make it sound smaller so the town would approve its construction.

The New Year's Eve party was held in that ballroom, with almost 700 guests who paid $1,000 per couple.

First came hors d'oeuvres and champagne on the terrace overlooking the pool, always heated to 78 degrees, like the second pool right on the ocean.

Cocktail shrimp, stone crab claws, cold lobster, oysters on the half shell, sushi, and caviar dished onto blini were among the offerings.

After that, the guests swanned over to the ballroom for dinner and dancing. No one would be hungry for dinner, which included truffle and ricotta ravioli and filet mignon and scallops. The bubbly: from Trump's own Charlottesville, Virginia vineyard.

If Donald had wanted to invite them, he could have attracted some of the biggest celebrities in the country to the bash. But the guests were club members and old friends.

Donald's family, including nine-year-old Barron, sat with him watching the rocking event band, Party on the Moon.

Like a proud maitre d', Donald went around greeting guests and posing for photos with his stunning wife Melania.

Trump made brief remarks, punctuated by his trademark, 'We will make America great again!' Just before midnight, he appeared with his family on Fox News. I was at the extreme right of the screen, with a jaunty Happy New Year hat on my head.

For years, Pam, a former Washington Post reporter who contributes vivid descriptions to my books, and I have attended Donald's New Year's Eve parties, as well as other events at Mar-a-Lago.

This time, there was something different: Secret Service agents.

Back in August, I had urged Donald to request protection, saying private protection is useless at this point. He finally did request it in October and got the code name Mogul when his protection began on November 12, 2015.

In contrast to past New Year's Eve parties, guests at the party were screened for weapons, as agents struggled to open bejeweled clutch purses.

Stony-faced Secret Service agents stood at key locations in the ballroom wearing identifying pins, their hands clasped in front of them so they could grab their guns and react with their hands quicker.

Other agents were not so obvious, mixing in with the guests and not wearing the traditional audio earpiece.

On a typical shift, as many as 20 agents guard Trump. Sitting on sofas overlooking the pool four days before the party, I asked Trump how he likes being protected by agents.

'It's great,' he said. 'I have agents all around me as I'm playing golf, and they are all looking in different directions, so when I miss a shot, they don't see it!'

Unlike Hillary Clinton, who is so nasty to her agents that being assigned to her detail is considered a form of punishment, Trump treats his agents with respect and consideration, a sign of character.

Likewise, when Tony Senecal, his butler and now historian at Mar-a-Lago, had a stroke, Trump visited him in the hospital and insisted that he stay at Mar-a-Lago for his recovery.

For 26 years, Norma Foerderer was Trump's top aide, becoming his vice president. No one knew so well both the personal and business side of the mogul. Just before she retired in 2006. Foerderer, who has since died, gave me her only in-depth interview about Donald.

Foerderer said there are two Donald Trumps: the 'outrageous' one who utters brash comments on television and the real one that only she and other insiders know.

'I mean Donald can be totally outrageous, but outrageous in a wonderful way that gets him coverage,' Foerderer told me. 'That persona sells his licensed products and his condominiums. You know Donald's never been shy, and justifiably so, in talking about how wonderful his buildings or his golf clubs are.'

The private Donald Trump, on the other hand, is 'the dearest, most thoughtful, most loyal, most caring man', Foerderer said. That caring side inspires loyalty and is one of his secrets to his success.

Barbara Res experienced the freedom Trump gives his executives when he hired her in September 1980 to be in charge of building the 68-story Trump Tower on Fifth Avenue.

Forget about female executives in the construction business then; they did not exist. But Trump put his faith in her and told her he wanted her to 'treat everything as if it were my project and my money and I would be his final word,' Res says.

Calling Trump a pragmatic problem solver, one of his lawyers told me: 'I have observed Donald Trump during the past 20 years in rooms filled with lawyers, architects, CPAs and other professionals for all sorts of planning.

'He listens, surveying everyone's opinions, encouraging thorough debate, and welcoming positions challenging to him or to conventional wisdom. He then decides, reversing his previous positions if he thinks it's warranted.'

To create Mar-a-Lago, Donald overcame opposition by town officials who considered Trump a nouveau riche upstart. In a few instances, the officials belonged to competing clubs that still discriminate against minorities.

When Trump bought Mar-a-Lago for a mere $5 million in 1985, no one wanted it. Marjorie Merriweather Post, who had built the magnificent, 140-room estate, saw it as a summer White House and willed it to the government.

But Jimmy Carter, who famously turned down the heat at the White House to 68 degrees, thought the acquisition frivolous.

In deteriorating condition, the property reverted to Post's foundation, which could not find a buyer. No one wanted to assume the cost of maintaining the mansion—at least $3 million a year, including taxes.

After Trump purchased it, he turned it into a thriving club that typically costs a non-refundable $150,000 to join, plus $12,000 a year in fees. In addition, the roughly 450 members pay for dining, shows, and suites where they can stay overnight.

Based on sales of other Palm Beach property fronting on both sides of the 3.75-square-mile island, Mar-a-Lago is now estimated to be worth $300 million.

Unless he is campaigning, every weekend during the season, Trump flies down on his Boeing 757-200 with Melania and his children who live in New York to spend the weekend at Mar-a-Lago, where he likes the prime dry aged strip steak and the meatloaf, that he insists remain on the menu.

Donald sleeps only three hours a night, giving him an advantage over other candidates, and drinks only diet Cokes or virgin Pina Coladas.

No matter how important the meetings he is conducting, Trump has always made it a practice to take his children's phone calls. In the morning, Trump reads the papers with Barron, commenting on developments. Barron is now taking golf lessons from a pro.

In his book 'Dreams From My Father', Barack Obama admitted that as a community organizer, he got some asbestos removed from some pipes in one Chicago housing project but accomplished little else.

'When classmates in college asked me just what it was that a community organizer did, I couldn't answer them directly,' the future president wrote. Instead, he said, 'I'd pronounce on the need for change.'

In contrast, Trump has amassed a fortune of $10 billion and employs 34,500 people. He didn't do that by being an idiot, a nut, or a bigot, some of the kinder terms that have been used to describe him.

Trump is running for president because he believes deeply in America. He symbolized that when he engaged in a protracted dispute with the town of Palm Beach over the American flag he erected on the front lawn of Mar-a-Lago on South Ocean Boulevard.

Originally, the massive flag was closer to the street and mounted on a much taller flag pole. Then the town, where anyone worth less than $100 million is considered a pauper, claimed the flag's height exceeded zoning regulations and began fining Donald $1,250 a day unless he removed it.

Trump sued for $25 million, claiming his First Amendment rights were being violated. Eventually, Trump and the town settled. Trump agreed to mount the flag on a shorter flag pole. Instead of paying the fine that by then totaled $120,000, Trump agreed to donate $100,000 to Iraq War veterans' charities or the local VA hospital.

As he is glad to tell you, Trump usually wins in the end: He moved the flag to ground that he had his workers elevate, so now it towers over the landscape just as much as before.

Years ago, Trump told me that Obama is a 'disaster.' But he wasn't yet ready to be quoted. As a businessman, he did not want to take on the president. But now he is taking on the marketing challenge of his life.

When marketing his real estate and golfing clubs, he sees how much traction he gets and acts accordingly. He will do the same with his campaign message.

In 2012, Trump told me for publication that the Republican Party will continue to lose presidential elections if it comes across as mean-spirited and unwelcoming toward people of color. In contrast to the caricature of himself that he creates on TV, that represents the real Donald Trump.

Love or hate his politics, people like Trump, and they see him as a strong leader.

I was shocked when our housekeeper, a lifelong Democrat, called me to urgently tell me I had to watch Donald's televised speech in New Hampshire. 'I like what he is saying. He is wonderful,' she said.

Trump will most likely win the Republican nomination. When he does, count on him to change his marketing approach to woo a broad array of voters and win the presidency.