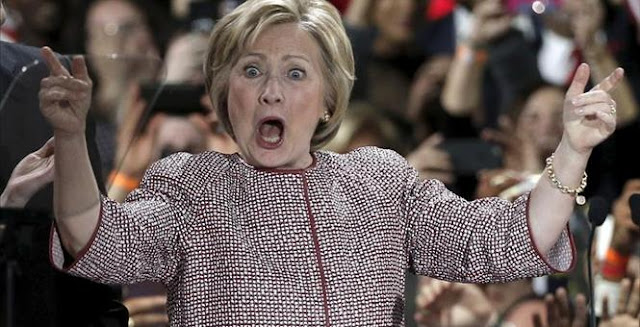 
Democrats are starting to ask if Hillary Clinton could lose to Donald Trump and one reason they should worry.
The Wall Street Journal reported on page: Bill Clinton used the nonprofit Clinton Global Initiative to funnel private money to a company owned by friends of Bill and Hillary. This is in direct violation of the law that says nonprofits, which are exempt from most taxation, aren’t supposed to act on the financial behalf of for-profit businesses.


After more than a year of research, a Wall Street analyst is arguing the Clinton Foundation's books are riddled with financial inconsistencies that rise to the level of "fraud."
Charles Ortel, who gained recognition for correctly identifying problems with General Electric's financial statements in 2008, has prepared 40 reports highlighting discrepancies that he said proves the Clinton Foundation has covered up cash flow since 1997.
The financial whistleblower said his 15 months of research revealed gaps in the amount of money donors claim to have given and the amount of money the foundation claims to have received.
The Clinton Foundation network is actually comprised of several different charities that all perform seemingly similar functions. Those include the Clinton Health Access Initiative, the Clinton Global Initiative, the Clinton Climate Initiative and several more, all with varying degrees of overlapping finances.
Ortel said the foundations' complex paper trails are littered with mistakes and repeat filings.
In November, the Clinton Health Access Initiative was forced to refile its tax returns after a review revealed big-ticket foreign donations that had been left off its Form 990 filing.
The Bill, Hillary and Chelsea Clinton Foundation has been removed from the website of a prominent nonprofit watchdog, Charity Navigator, because its "atypical business model cannot be accurately captured" by methods used to size up traditional charities.
The pattern extends to smaller charities linked to the Clintons, Ortel noted. One organization founded by former President Bill Clinton, the American India Foundation, has problems that stretch around the country.
For example, the American India Foundation's nonprofit status was revoked in Illinois in 2002, according to state records. This year, the charity was listed as "not in good standing."
In Massachusetts, the foundation had its nonprofit status revoked in June 2014 and was not reinstated until March 22 of this year.
In March 2015, the charity held a gala in an Atlanta hotel, according to an event promotion.
But the American India Foundation was not then registered to solicit funds in the state of Georgia, correspondences shared with the Washington Examiner suggest. In fact, the only charity in the Clinton orbit that was registered in the Peach State as of October was the Bill, Hillary and Chelsea Clinton Foundation — even though the Clinton Global Initiative plans to hold its glitzy annual conference in Atlanta next month.
An official with the Georgia secretary of state's office said the state government did not have an open investigation into potentially unregistered arms of the Clinton Foundation, although emails shared with the Examiner indicate inquiries about the charities were routed to a securities enforcement attorney in November of last year.
Sandra Miniutti of Charity Navigator said the patchwork of nonprofit regulations across different states can sometimes trip up well-meaning charities.
"The current state registration system is complex, bureaucratic and out-of-date with the modern times," Miniutti said. "It was conceived before the internet and technology made it easily for charities to solicit across state lines."
Miniutti said nonprofits often tap outside firms to keep up with compliance issues.
"While we don't condone non-compliance, it is not particularly surprising to hear of an organization accidently being out of compliance," she said.
Hal Moroz, a private attorney and former Georgia judge, said he referred some of Ortel's findings on the violations of the foundation to the state attorney general's office.
"This is a matter of great public interest because we have a major party presidential candidate who has been greatly enriched by the questionable activities of a foundation that was meant to serve charitable public interests," Moroz said.
"The records of charities are open to public review and scrutiny, and this is so because there are certain tax advantages to registering under state and federal law as a charity and the citizens of the United States foot the bill for these tax advantages," he added.
Bill Clinton serves as honorary chair of the American India Foundation, a title he's held since founding the organization in 2001.
The former president created the foundation alongside Rajat Gupta, who was then managing director at McKinsey & Co.
McKinsey & Co., a major consulting firm, has donated up to $1 million to the Clinton Foundation and has employed Chelsea Clinton.
Gupta became engulfed in controversy in 2011 when he was hit with accusations of insider trading from the Securities and Exchange Commission.
Ortel said he believes Bill Clinton seldom mentions his ties to the American India Foundation due to its messy finances and affiliation with individuals like Gupta.
A spokesman for the foundation said the lapse in registration in Massachusetts was due to documents the state said it never received and that the registration lapse in Illinois was due to a misunderstanding involving the deadline to file paperwork. The spokesman also said the foundation registered to solicit donations in the state of Georgia in March of this year.
The little-known charity is just one example of the way the Clintons' philanthropic network skirts federal and state regulations to continue operations despite massive financial discrepancies, Ortel said.
In other cases, the lines between foundation entities like the Clinton Health Access Initiative, the Clinton HIV/Aids Initiative, and the Clinton Climate Initiative were blurred enough to conceal specific transactions, he explained.
The Clinton Foundation's acceptance of foreign donations while Hillary Clinton served as secretary of state dogged the early days of her campaign but was quickly overshadowed by controversy over her private email server. Its operations during Hillary Clinton's diplomatic tenure are reportedly an aspect of the FBI investigation into her communications.
http://www.washingtonexaminer.com/financial-analyst-alleges-major-holes-in-clinton-foundation-records/article/2591335
Posted by Frances Rice at 6:17 PM