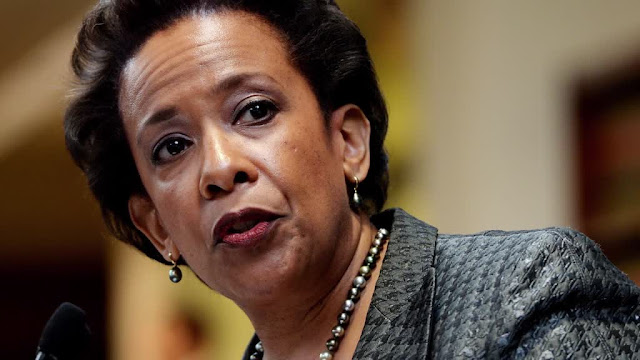 Photo: Loretta Lynch - The Clinton/Lynch meeting took place just months ahead of the 2016 election. (AP Photo/Jacquelyn Martin, File)
The American Center for Law and Justice has doggedly pursued information about then-Attorney General Loretta Lynch’s infamous tarmac meeting with former president Bill Clinton.
The Department of Justice has finally responded to ACLJ’s FOIA request with a small number of documents.
Several interesting points emerge from the DOJ’s emails, beginning with the fact that the FBI falsely claimed not to have any documents relating to the meeting:
[T]he Comey FBI lied to us. Last July, we sent FOIA requests to both the Comey FBI and the Lynch DOJ asking for any documents related to the Clinton Lynch plane meeting. The FBI, under the then directorship of James Comey, replied that “No records responsive to your request were located.”
The documents we received today from the Department of Justice include several emails from the FBI to DOJ officials concerning the meeting. One with the subject line “FLAG” was correspondence between FBI officials (Richard Quinn, FBI Media/Investigative Publicity, and Michael Kortan) and DOJ officials concerning “flag[ing] a story . . . about a casual, unscheduled meeting between former president Bill Clinton and the AG.” The DOJ official instructs the FBI to “let me know if you get any questions about this” and provides “[o]ur talkers [DOJ talking points] on this”. The talking points, however are redacted.
Another email to the FBI contains the subject line “security details coordinate between Loretta Lynch/Bill Clinton?”
On July 1, 2016 – just days before our FOIA request – a DOJ email chain under the subject line, “FBI just called,” indicates that the “FBI . . . is looking for guidance” in responding to media inquiries about news reports that the FBI had prevented the press from taking pictures of the Clinton Lynch meeting. The discussion then went off email to several phone calls (of which we are not able to obtain records). An hour later, Carolyn Pokomy of the Office of the Attorney General stated, “I will let Rybicki know.” Jim Rybicki was the Chief of Staff and Senior Counselor to FBI Director Jim Comey.
There are only two possibilities here: either someone at the FBI destroyed documents relating to the Bureau’s communications about the Lynch/Clinton meeting, or someone at the FBI lied in response to ACLJ’s FOIA request.
Federal agencies have personnel dedicated to responding to FOIA requests, and presumably the people who carry out this relatively mundane task would not lie or destroy documents without instructions from the top.
To me, the most interesting revelation of the DOJ documents is the extent to which the Democratic Party media were anxious to squash the Lynch/Clinton story.
Thus, Matt Zapotosky of the Washington Post told DOJ’s spokeswoman that he was “hoping I can put [the story] to rest,” notwithstanding that his editors were “still” interested:

Similarly, ABC News disclaimed any interest in the story, “even if Fox runs with it.” It is interesting that the Fox producer didn’t think the meeting was news, either: 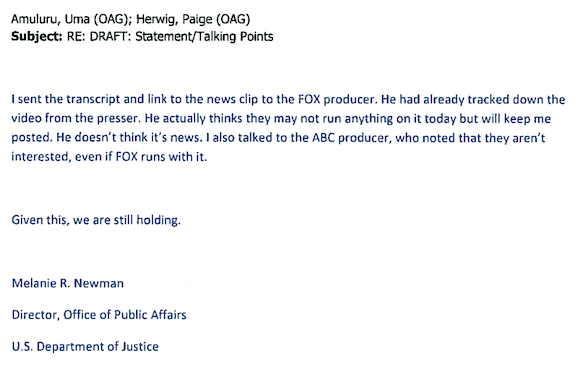 I like this one from NPR. The reporter observes sympathetically that the Lynch/Clinton meeting represented “an awful appearance problem.” We wouldn’t want anything to get in the way of Hillary’s campaign! 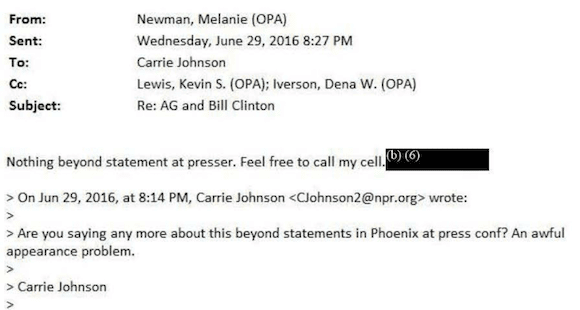 Loretta Lynch was in Phoenix as part of her Black Lives Matter tour.
Her meeting with the former President, which was certainly inappropriate and perhaps illegal, depending on the substance of their conversation, came to light only because a local reporter caught wind of it and asked Lynch about it during the routine press availability that she conducted after a day spent with the Phoenix Police Department.
Lynch responded deceptively to the reporter’s question:
[W]hile I was landing at the airport, I did see President Clinton at the Phoenix airport as I was leaving, and he spoke to myself and my husband on the plane. Our conversation was a great deal about bis grandchildren. It was primary [sic] social and about our travels. He mentioned the golf he played in Phoenix, and he mentioned travels he’d had in West Virginia. We talked about former Attorney General Janet Reno, for example, whom we both know, but there was no discussion of any matter pending before the department or any matter pending before any other body. There was no discussion of Benghazi, no discussion of the state department emails, by way of example. I would say the current news of the day was the Brexit decision, and what that might mean. And again, the department’s not involved in that or implicated in that.
Right.
Lynch’s DOJ created talking points about the meeting, but they apparently are secret, as they were redacted from all of the emails that contained them.
How a FOIA exception could apply to those talking points, which were designed to be shared with reporters, is a mystery.
But that is how the Obama administration responded to all FOIA requests on controversial matters: with evasion and obfuscation if not with outright lies.
And President Trump and Attorney General Jeff Sessions do not yet, and may not ever, control the Department of Justice.
The Lynch/Clinton meeting became a major news story and even a campaign issue, but not because the Democratic Party press had any appetite for the story.
As the DOJ emails show, they didn’t. Iowahawk’s famous tweet seems truer every day:

David Burge @iowahawkblog
Journalism is about covering important stories. With a pillow, until they stop moving.


Reporters with the Washington Post and New York Times were apparently less than enthusiastic about covering the controversial private meeting between then-Attorney General Loretta Lynch and former President Bill Clinton just months ahead of the 2016 election.
The non-profit American Center for Law and Justice published emails Friday that showed reporters asking Department of Justice officials for details on the meeting.
Mark Landler, a reporter for the Times, is seen in one June 30 email reaching out to a DOJ official to say he's "been pressed into service to write about the questions being raised" by the meeting.
Matt Zapotosky with the Post emailed a DOJ official the same day after several other emails to say that his editors "are still pretty interested" in the story but that he wanted to "put it to rest."
Lynch and Clinton had met on the tarmac in Phoenix to discuss "primarily social" matters, according to public comments Lynch made after the meeting.
But at the time, Democratic presidential candidate and former Secretary of State Hillary Clinton was under federal investigation for her use of a private email server as a top government official.
When news initially broke of the meeting, the Times did not publish any stories about the meeting for more than 24 hours, as the Washington Examiner reported.
http://www.washingtonexaminer.com/emails-show-washington-post-new-york-times-reporters-unenthusiastic-about-covering-clinton-lynch-meeting/article/2630650
Posted by Frances Rice at 11:49 AM