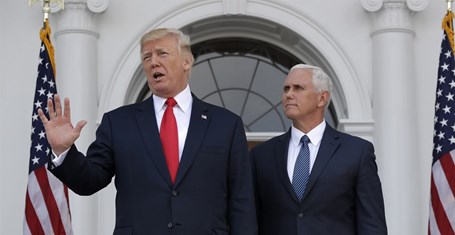 President Trump issued yet another warning to North Korea Friday morning, saying the U.S.’s military solutions are ready to respond.


“Military solutions are now fully in place,locked and loaded,should North Korea act unwisely,” the president tweeted. “Hopefully Kim Jong Un will find another path!”
The president on Thursday told reporters his threat of “fire and fury” may not have sent a clear enough message.
“Maybe it wasn’t tough enough,” he said at his Bedminster golf club.
"I will tell you this: if North Korea does anything in terms of even thinking about attack — of anybody that we love or we represent, or our allies or us, they can be very, very nervous," Trump warned. "And they should be, because things will happen to them like they never thought possible."
The president said his threats are "not a dare."
"[Kim Jong Un is] not going to go around threatening Guam and he’s not going to threaten the United States and he’s not going to threaten Japan and he’s not going to threaten South Korea. That’s not a dare, as you say. That is a statement of fact," Trump said.
Defense Secretary Jame Mattis also issued a stark warning to North Korea, saying in a statement that the “DPRK should cease any consideration of actions that would lead to the end of its regime and the destruction of its people.”
North Korea has vowed to launch four intermediate-range missiles that would land in the sea around Guam.
https://townhall.com/tipsheet/leahbarkoukis/2017/08/11/trump-tweet-n2367400?utm_source=thdailypm&utm_medium=email&utm_campaign=nl_pm&newsletterad
_________________________ 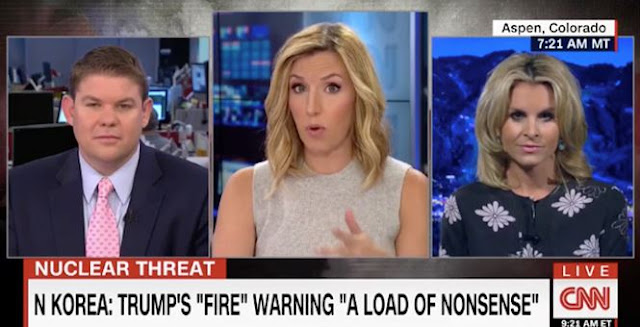 Via Daily Caller, CNN actually pushed back against a Clintonite’s claim that President Trump’s remarks about North Korea facing “fire and fury” concerning its nuclear weapons program showed that he was "temperamentally unfit" for office.

The left has gone nuts.

Friendly reminder, North Korea has had nuclear weapons since 2006, just not the miniaturization technology to put a warhead on an ICBM. Well, that’s changed.

Their nuclear program began long ago, though liberals act as if Trump gave North Korea the nukes—and that this is his fault.


“Hold on, hold on,” Harlow interrupted. “Let me read you a statement from former president Bill Clinton in 1993: ‘…It is pointless for North Korea to try to develop nuclear weapons because if they ever use them it would be the end of their country.


“How is that markedly different from rhetoric used by President Trump?” Harlow asked.


“Well, look, that was in 1993, we’re now talking about 2017. We’re dealing with a real potential threat here,” Elrod responded."
It’s the age-old problem here with the Left.
It’s different when Democrats say it.
And when they’re caught with their pants down, as in the case with Bill Clinton’s remarks about North Korea, it’s just different somehow, or something.
They have no sense of history or they purposefully ignore it to achieve their goal.
Alas, the double standard we all rant about daily.
CNN hasn’t been friendly to Trump, but even a blind squirrel finds a nut.
Nice work pushing back on the narrative there, Ms. Harlow.
___________


The whining about Trump using "fire and fury" language in response to little Kim Jong threatening to *nuke* the U.S. really is astounding
___________


https://townhall.com/tipsheet/mattvespa/2017/08/11/cnn-host-calls-out-hillary-staffer-reminds-her-bill-clinton-and-trump-made-simil-n2367278?utm_source=thdailypm&utm_medium=email&utm_campaign=nl_pm&newsletterad=
Posted by Frances Rice at 10:01 AM