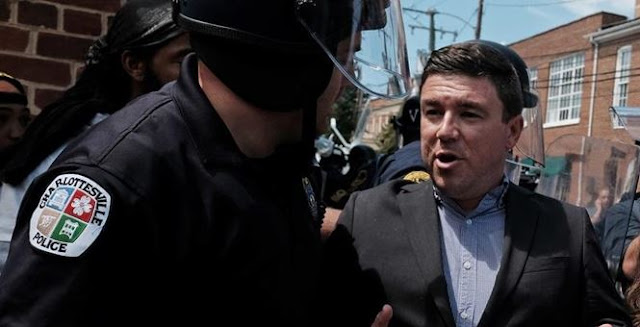 ﻿
According to the leftist Southern Poverty Law Center [SPLC], one of the white supremacist organizers of Saturday's rally in Charlottesville is a former Occupy Wall Street activist and supporter of Barack Obama.


Jason Kessler is listed with SPLC as an "extremist." Here's an excerpt from the information about Kessler published on their website:
Relying on familiar tropes of “white genocide” and “demographic displacement,” white nationalist blogger Jason Kessler seeks notoriety with his "Unite the Right" march in Charlottesville, Virginia.
Rumors abound on white nationalist forums that Kessler’s ideological pedigree before 2016 was less than pure and seem to point to involvement in the Occupy movement and past support for President Obama.
At one recent speech in favor of Charlottesville’s status as a sanctuary city, Kessler live-streamed himself as an attendee questioned him and apologized for an undisclosed spat during Kessler’s apparent involvement with Occupy. Kessler appeared visibly perturbed by the woman’s presence and reminders of their past association.
Those speaking at the Charlottesville “Unite the Right” event include Richard Spencer, who spoke at the first Charlottesville rally, Mike Enoch of The Right Stuff, Matthew Heimbach of the white nationalist Traditionalist Workers Party, Augustus Invictus, a pagan neo-fascist who has pledged to bring about a second Civil War, and Michael Hill of the League of the South.
Despite overwhelming condemnation from Republicans and conservatives of white nationalism and what happened in Charlottesville, the left and their friends in the media have tried to pin the weekend's violence on the mainstream right. It turns out, they should be looking further left.
Over to you Durham, North Carolina.


✔ @Bencjacobs
The activist arrested is a member of Maoist group that is pro North Korea and had just compared police officers to the Confederate Army: https://twitter.com/GrahamDavidA/status/897580797888278528 …


https://townhall.com/tipsheet/katiepavlich/2017/08/16/oh-my-leftist-southern-poverty-law-center-lists-charlottesville-white-supremacist-organizer-as-former-occupy-wall-street-obama-supporter-n2369506
Posted by Frances Rice at 8:57 AM